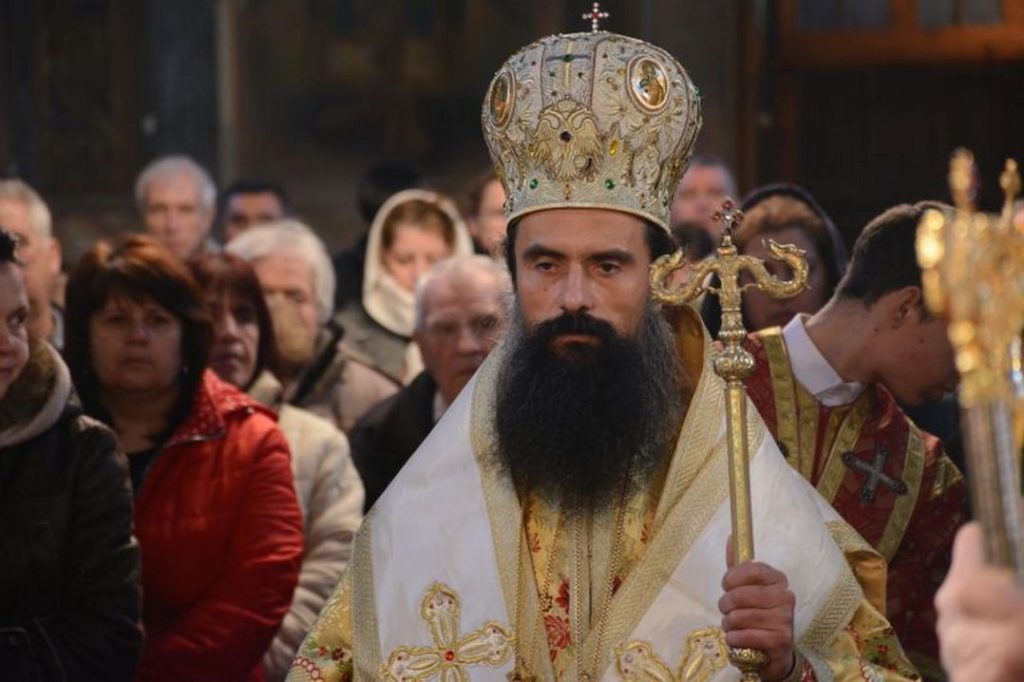 In an interview published on December 15 on the Bulgarian Orthodox Church official website, Metropolitan Daniel of Vidin spoke about the crisis of the Orthodox Church in Ukraine.

– The Holy Synod of the Bulgarian Orthodox Church has not expressed its position yet. Why is that?

– The Holy Synod is a collective and conciliar system of administration. Its decisions are made by majority votes, in accordance with the statutes of the Bulgarian Orthodox Church. To consider this issue, the Holy Synod created a commission that has been studying in detail all the documents related to the ecclesial crisis in Ukraine. It will express its opinion later on. At our synodal sessions, metropolitans, including myself, spoke out for the need to express the position of the Synod. But as I said before, the Synod is a collective body. Each person bears his own responsibility, before God and before the people of God.

Why did we consider it essential to express our position? Because the Church is Catholic and conciliar, as we confess in the Creed. In this sense, the dispute in Ukraine is not just a dispute between two local Churches. It concerns the entire Orthodox Church.

– What is your personal opinion on this issue, and why do you think it concerns the entire Orthodox Church?

– The dispute concerns the entire Orthodox Church, because it affects inter-Orthodox relationships. It destroys the millennial tradition of Church canon law, in particular about one of its fundamental principles: the boundaries in ecclesiastical jurisdiction. These boundaries have been clearly defined and recognized by all. Each autocephalous Church has the right to exercise independent administration within its territorial boundaries, but is not allowed to extend its jurisdiction over other local Churches. That is what is said in the 2nd canon of the Second Ecumenical Council and the 9th canon of the Third Ecumenical Council. They prohibit particular Orthodox Churches from extending their jurisdiction beyond their own region.

– So you consider that Patriarch Bartholomew violated the boundaries of his own jurisdiction?

– We are sure of it. Since Patriarch Bartholomew has been at the head of the Patriarchate of Constantinople, that is since 1991, he has always recognized that the Ukrainian Orthodox Church is under the jurisdiction of the Moscow Patriarchate. This was unquestionably confirmed by a series of letters and documents bearing his signature.

To what extent these claims are well-founded, this is yet another question. But this problem has been raised only now, 300 years after the drafting of this document, whereas Church rules determine a deadline for litigation involving jurisdictional rights in a given territory. For example, the 133rd canon of the Council of Carthage sets a deadline of three years. If a bishop considers that another bishop has encroached on his territory, he has three years to make his claim. The 17th canon of the Fourth Ecumenical Council and the 25th canon of the Quinisext Council set the deadline of thirty-year to resolve jurisdictional disputes over parishes. And in this case, several centuries have passed. From the canon law point of view, these disputes are unacceptable.

Another example: in 1917, Patriarch Germanus V of Constantinople wrote the following words to the bishop of the Georgian Church after its self-proclaimed autocephaly: “I do not and cannot know an independent Georgian Church, because the Orthodox Georgians have been for over a hundred years under the administration of the Russian Church. Your separation and the creation of an autocephalous Church are possible only with the agreement between your Church and the Russian Church… We cannot interfere in your internal ecclesiastical matters, but we paternally advise you to pay attention to your pastor’s voice and to deal with this matter through the salvific channel of the ecclesiastical canons”.

The Patriarch of Constantinople’s claim, that his rights were violated because the Kyiv Metropolitan does not commemorate his name during the services, is inconsistent. It is used as a formal excuse to cancel the document of 1686. However, this situation has not been challenged for 300 years. For three centuries, the Ukrainian Orthodox people have lived in full unity with the Russian Orthodox Church and has been an integral part of it. Since then and to this day, the Kyiv metropolitans were members of the Holy Synod of the Russian Orthodox Church. They had the right to vote to choose the Moscow Patriarch or to be elected patriarchs. For 300 years, the Ukrainian faithful have recognized the Moscow patriarch as their spiritual primate.

So, can someone from outside appear 300 years later and say, “I am your father”? Who can follow him and trust him? How can he proclaim himself the spiritual father of a people, if he remembers and honors the fathers who gave birth to him and educated him in the faith? The holy canons precisely define these mutual relationships.

– But it is not always clear why Ukraine, as an independent State, does not have the right to have its own independent Church.

– This is indeed a question. But first and foremost, we must understand what the Orthodox people and their canonical hierarchs say in Ukraine, because it is essential. The Ukrainian Bishops’ Assembly convened on November 13. Eighty-three hierarchs were present. They strongly opposed the Patriarchate of Constantinople’s interference into its canonical boundaries and declared that “the Ukrainian Orthodox Church has all the rights of independence and autonomy needed today to fruitfully serve God and the Ukrainian people”.

Besides, all the saints canonized in the twentieth century in Ukraine call their spiritual children to preserve the holy unity between the Ukrainian Orthodox Church and the Russian Church. Let’s also look at the situation from this point of view. Let us ask the question, who insists on autocephaly? First of all, civil authorities. And as Metropolitan Onufriy rightly points out, why are we paying attention to the voices of groups that burn churches, propagate nationalism, incite hatred, cry “death to the Muscovites”? Why do they listen only to their voices and their calls for autocephaly? And while the power is obviously preparing for retaliation. Why don’t we take into account the point of view of the only canonical Ukrainian Orthodox Church? Why does the point of view of these groups prevail, whose leaders have been deprived of their ecclesial rank and excommunicated by the Church?

– Could we draw a parallel with the schism in the Bulgarian Orthodox Church that took place about twenty years ago?

– On this occasion, the Ecumenical Patriarch acted quite differently. Can we speak of a “double standard”?

– I notice that at the Council of 1998, the Ecumenical Patriarch raised the question of Patriarch Maxim’s retirement. But our predecessors, hierarchs with great spiritual and courageous experience, objected, saying they had invited him to resolve the schism, not to make it worse. So the parallel between the schism in Bulgaria and that in Ukraine is absolutely justified.

The Ukrainian Orthodox Church of the Moscow Patriarchate is currently in the same situation as the Bulgarian Orthodox Church back then. And our schismatics endeavored to usurp the identity of the Church, to plunder its holy objects, to take possession of property that did not belong to them; and the saddest thing, this destroyed the morals and faith of the people.

We know how it ended up for them, and what their works were. It’s the same in Ukraine. In 1992 Filaret, former Kyiv Metropolitan was defrocked because of his schism and proven personal moral mistakes, and later he was excommunicated from the Church. His dismissal, because of a multitude of canonical transgressions, was absolutely founded. In his October 11 decision, in full contradiction with the holy canons, the patriarchate of Constantinople restored this man in the priestly order.

– What do you think the position of the Bulgarian Orthodox Church should be?

– In a statement concerning the situation in Ukraine, three metropolitans of the Holy Synod referred to the experience of the Pan-Orthodox Council of 1998, that made it possible to overcome the schism in our country. We proposed, in this case, to act in the same way, namely to raise the question of the situation in Ukraine at the Pan-Orthodox level.

– That is, to again summon the Pan-Orthodox Council?

– It must be done for various reasons. First of all, to resume the dialogue between the Patriarchate of Constantinople and the Russian Orthodox Church, after the latter’s decision to break Eucharistic communion with the Patriarchate of Constantinople. Resuming the dialogue between the two Churches, with the participation of the representatives of other local Churches, is the adequate method to heal the wounds in Ukraine. Any decision concerning local Orthodox Churches cannot be made and take effect without their agreement and support.

– On December 15, the “Unification Council” convened by the Patriarch of Constantinople will be held in Kyiv. What will the result be, according to you?

– I will answer with what a hierarch of the Canonical Church said to Patriarch Bartholomew, when he invited him to participate in this Council: “I firmly believe and I confess that I remain faithful to the Orthodox Church. Whereas my participation in this council would contradict the psalm of David: “Blessed is the man who walks not in the counsel of the ungodly, nor stands in the way of sinners, nor sits in the seat of the troublesome; but his will is the law of the Lord, and in His law, he meditates day and night! (Ps. 1:1-2). What can be the result of a council convened in violation of the canonical order and involving people outside the Church? From my point of view, this council will not resolve the division of the faithful of Ukraine, it will only make the situation worse. In all this distressing situation, there is only one comforting circumstance: the eagerness of the Orthodox people of this country to preserve the unity of the Holy Orthodox Church, which finds an echo and support in the entire Orthodox world.

– Is there some political pressure from the Russians or the Americans on the Holy Synod of the Bulgarian Orthodox Church to tip the scales in favor of one solution or the other? Or in favor of the Ecumenical Patriarchate, who is the spokesperson for some interests?

– I can clearly say that during the discussions in the Holy Synod, the metropolitans express their own points of view. So the study of the questions and the decision-making are solely based on the understanding and conscience of each hierarch.

– But you are not answering my question. According to you, is there some political pressure (through the Bulgarian government), from the Russians or the Americans, who are behind the Ecumenical Patriarch’s actions?

– I can only answer for myself. And I categorically declare that no one can put pressure on me. Taking into account the development of the situation, at the present time, all Orthodox Christians must reinforce their prayers for the preservation of the unity of the Holy Orthodox Church in Ukraine and throughout the world.

Beside an anthology on Cistercian texts, Emma Cazabonne has translated and published articles on Cistercian spirituality, the Middle Ages, and Orthodoxy. She converted to Orthodoxy in 2008. Her husband is an Orthodox priest. If you are interested in having your book translated into French, she can be contacted here: https://wordsandpeace.com/contact-me/.