[ditty_news_ticker id="27897"] The court process against Archbishop Jovan and the other Bishops, priests, monastics and believers of the Orthodox Ohrid Archbishopric has begun - Orthodox Christian Laity 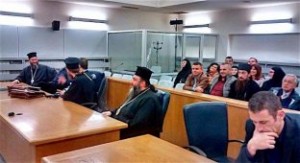 After seven months of postponing of the scheduled court hearings, today, January 28, 2016, in the Court of First Instance Skopje I in Skopje, the politically rigged court process against His Beatitude Archbishop Jovan of Ohrid and Metropolitan of Skopje, two Bishops, priests, monastics and believers of the Orthodox Ohrid Archbishopric has begun.

The hearing was soon done and the trial could have ended in the soonest possible time, but that will not be the case, due to the tendentious delays of the Public Prosecutor, who requested the witnesses that already testified, to be brought to the court again. The lawyer of Archbishop Jovan of Ohrid brought forth to the Court, that the decision of the Supreme Court, through which the case is being returned for a retrial, states crystal clear that the testimonies are not at all problematized, but instead, the Court of First Instance is asked to reevaluate its verdict, on the grounds of the already existing testimonies and proofs.

Contrary to the recommendations by the Supreme Court, the Court of First Instance still decided to accept the request of the Public Prosecutor, and scheduled the next hearing for, as late as, mid-March, thus continuing the court prosecution on religious basis targeted against Archbishop Jovan, the Bishops, priests, monastics and the believers of the Orthodox Ohrid Archbishopric.

In the majority of the international reports, the proverbial domestic judiciary remains one of the reasons for the decline of R. Macedonia, on the scale of the normal functioning of the civil society. The state of the judiciary are especially noted in the report of Priebe, as a segment that requires many serious reformations, that should lead to democratization of our society.