The Orthodox world is being shattered by the war in Ukraine. A close adviser to Ecumenical Patriarch Bartholomew reflects frankly on the state of Orthodoxy before the invasion, and imagines how it needs to change if it is to have a future. 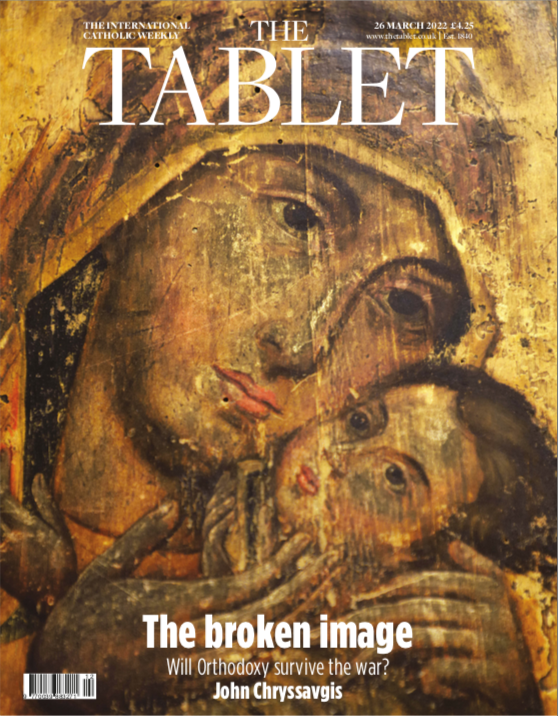 On the Sunday of the first week of Great Lent, which this year began on 7 March, the Eastern liturgical cycle celebrates the Feast of Orthodoxy. Sometimes conceitedly called the “Triumph of Orthodoxy” it would be more accurate to describe it as the celebration of the “restoration of images”, for on this day Orthodox Christians together remember the final laying to rest of the iconoclastic controversy, which had questioned the veneration of icons. This year’s observance was tarnished by an unprecedented lack of ceremonial unity across the Orthodox world. At the same time as many Orthodox Christians were praying for the suffering people of Ukraine, the head of Russia’s National Guard – often referred to as President Putin’s private army – was thanking Patriarch Kirill of Moscow for presenting him with an icon that he declared would give his soldiers a “swift victory” over their enemies.

Although religion should never be used to justify war, all too often it infiltrates and intensifies violent conflict. The echoes of the association between religion and violence have been amplified in recent weeks by the way President Putin and Patriarch Kirill have both used the “historical and spiritual unity” between Russians and Ukrainians as a pretext for a war of conquest against a neighbour. The unholy implications of Kirill’s “theology” of Russkii Mir or “the Russian world” have been exposed by religious leaders and academics. Responsibility for the atrocities in Ukraine lies with the Russian state and its leadership. Nothing excuses the failure of the leadership of the Russian Orthodox Church to condemn the war and to demand an immediate ceasefire. The revanchist motivations of Putin’s war have been denounced by humanitarian advocates and groups. And the fantastical narrative espoused by some apologists for Putin’s actions that “holy Russia” is defending itself from attack by a morally decadent West appalls every sane observer.

Yet, beyond these immediate reactions, there needs to be a broader reckoning with the gravity of this moment, against which sovereign nations, civil societies, and religious communities will be measured for decades to come. The Orthodox Church will not emerge unscathed from this reckoning. It, too, will be judged on whether it rises to the occasion or atrophies into irrelevance. What will transpire once the din of war subsides? I see the future of Orthodoxy resting on how it faces four key challenges.
The first is the inclination within Orthodoxy towards ethnocentric nationalism. This plagues every autocephalous Orthodox Church. For the Life of the World: Toward an Orthodox Social Ethos, a document on the social teaching of the Orthodox Church commissioned by the Ecumenical Patriarch, declared in 2020 that this has triggered “the recent recrudescence in much of the developed world of the most insidious ideologies of identity, including belligerent forms of nationalism and blasphemous philosophies of race”. Orthodox Churches must remember and relearn that national identity should always deepen and never debase the principles of communion and conciliarity. For centuries, endemic nationalism insulated our Churches from one another; today, it is isolating them from the rest of the world. It reduces their ecclesiastical priorities to a frivolous “game of thrones”, and makes it impossible for assemblies of bishops to resolve the perennial irregularities of their overlapping jurisdictions. And it horrifies outsiders who witness Orthodox support in Ukraine being offered only to the faithful from their own camps.
Second, ecumenical openness is vital if Orthodoxy is not to fragment and divide further. Endless recriminations, internecine disputes over esoteric issues of primacy and jurisdiction, and the condescending claims of one or other Church to greater antiquity or to superior authority over an exotic element of liturgy and canon law only reinforce nationalism and parochialism. Many converts are drawn to Orthodoxy because of its refusal to be conformed to the world. But Orthodoxy can become mired in an attachment to the past that forgets the Church’s vocation to engage with the world, not to escape it. And this is best done collectively. The Ecumenical Patriarch’s hope when he convened the Great Council in Crete in 2016 was that it would have been infinitely more convincing and persuasive in its engagement with the issues the world faces if it spoke with one voice as the Orthodox Church. The absence of Russia from the Great Council was a tragedy.
Third, what became painfully obvious during the Covid pandemic but has been even more poignantly highlighted in the weeks since Russia’s invasion of Ukraine is the Orthodox world’s indifference to social consciousness. There is little appetite for, or experience of, negotiating a healthy relationship between Church and state, between sectarian nationalism and Christian humanism, and between faith and science. During Covid, many Orthodox leaders were preoccupied with defending medieval convictions from imagined conspiracies against religious believers; since the beginning of the war in Ukraine, Orthodox leaders have been almost paralyzed by division among themselves and by their isolation from the outside world. The Orthodox Church must learn to verbalize and defend how it imagines the phrase “on earth as in heaven”. It must embrace a culture of dialogue with the world – humbly and candidly, collaboratively and constructively – and be willing and ready to translate (not just to replicate) its message for the contemporary world.
Finally, the Orthodox Churches must include lay people at every level of church life. Too often, their leaders look on as the laity leads proactively, even prophetically. In the protests by Orthodox Christians against the invasion of Ukraine, Russian Orthodox bishops have been conspicuously absent. By contrast, hundreds of extraordinarily brave Russian Orthodox priests have publicly decried the sins of their country’s leaders; and even more courageously, those Russians clamouring most forcefully, and movingly, for solidarity with the Ukrainian people have been lay Christians. They have shown the leaders of the Church what witness to the gospel, what martyrdom for the truth, looks like.
If there is to be a renewal of Orthodox Christianity there must be a greater participation of the laity in the life of the Church. The marginalization of women is particularly damaging and indefensible. Nothing an Orthodox bishop does should exclude lay women and men – including sacramental ordinations (involving lay consent), canonical definitions (inspired by lay concerns), and conciliar decisions (informed by lay consultation).
Orthodox Christianity cannot continue as before. Might the embers of this tragic war give rise to a restored image of the global Orthodox Church? This period of Lent demands that we look in the mirror and ask ourselves some hard questions.
John Chryssavgis is Archdeacon of the Ecumenical Patriarchate and theological advisor to Ecumenical Patriarch Bartholomew. His books include “Light Through Darkness: The Orthodox Tradition” (Darton, Longman and Todd, 2004) and “Creation as Sacrament: Reflections on Ecology and Spirituality” (T&T Clark, 2019).
This article originally appeared in The Tablet, 26 March 2022.   SUBSCRIBE HERE
Share. Twitter Facebook Pinterest LinkedIn Tumblr Email
Previous ArticleOPEN LETTER TO THE SYNOD OF THE ORTHODOX CHURCH IN AMERICA ON THE WAR IN UKRAINE
Next Article OCA Holy Synod Meets for its Regular 2022 Spring Session