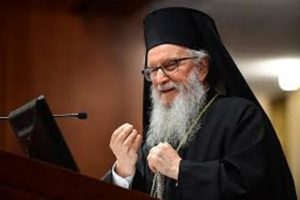 If there was ever any doubt that the ecclesiastical leadership we have is at this point unworthy of the Greek community, it was confirmed this past week in a tragic way. He put his selfishness and his interest above the interest of his flock and the people who chose him to lead our church almost 20 years ago.

Unfortunately – and we write this with regret – that is what Archbishop Demetrios has done at least since The National Herald broke the story that the Archdiocese was bankrupt. And he set precedent with his rebellion against the Ecumenical Patriarchate.

In essence he said: “let it burn.” Or, if you prefer, Samson’s “Let me die with the Philistines” (Judges 16:30). Ecumenical Patriarch Bartholomew, after a long period of crisis and anxiousness – and, many say, protection of Demetrios – decided it was time to do what he should have done many months ago.

He asked for the archbishop’s resignation. Is there anyone with any connection to reality who would disagree with that request? But to the surprise of the uninformed and unobservant, the archbishop refused to resign . He picked up his own flag. He became a rebel.

And what is his excuse? He wants to accomplish his God-given work. To borrow from Peter to pay Paul.

If the Patriarch’s decision was unfair, if he had not shown great patience, if the damage done was not so great, then one could sympathize and support the archbishop. But the issue is obvious. If there is a surprise in this case – which no doubt will have serious consequences for the Church in America and the Patriarchate now and for years to come – it is the way in which the patriarch reacted. (Recall how decisively he acted in the case of Iakovos?)

Patriarch Bartholomew backed off. He looked for mitigating circumstances. He gave Demetrios time to regroup. It is indeed surprising how the experienced Bartholomew did not immediately force Demetrios’ resignation and usher in the election of a new archbishop of America.

Perhaps the Patriarch with his ecclesiastical status, upbringing, and mindset does not have the full picture of the consequences of his act. But the undeniable reality is that he has made a serious mistake. It sends a very unpleasant message to friends of the Patriarchate as well as to its enemies.

A message of acceptance of rebellion from weakness. Something that if he does not change soon, he and the Patriarchate will pay for dearly.

The few rebels today will multiply tomorrow. Because they smell blood…

Some support the theory that the archbishop should be allowed to end his term with “glory and honor” at the end of the Clergy-Laity Congress, which will be held this year in Boston.

July 4 is not that far away, they say. We do not think there is any objection to leaving with dignity. But with celebrations?

But if he is to retire then the Patriarch should not have asked him to resign now.

Specifically, Archbishop Demetrios refused to resign after Patriarch Bartholomew invited him to do so officially at the meeting of the Patriarchate’s Holy Synod on May 30. He said that he wants to stay to fix the problems of the Archdiocese.

No one can predict the developments from this point on. It should not be ruled out that Demetrios will put the Church and the Greek-American Community in vicissitudes.

Bartholomew invited Demetrios into his office for a private discussion and told him it is time to think of resigning. The archbishop refused. Then, the patriarch put the issue to the Holy Synod, inviting its members to assume their responsibilities. Regarding what was said about “autocephaly” at the Hellenic College and Holy Cross (HCHC) commencement, the archbishop said he didn’t hear what was said because the microphones weren’t working properly.

Also, PricewaterhouseCoopers’ report about the St. Nicholas National Shrine was read at the Synod and was discussed extensively. Many members pointed out contradictions in the report. The patriarch said people do not give money (toward the rebuilding) when they have lost their trust (in the institution).

The construction of St. Nicholas stopped six months ago because of lack of funds. Since then, no update has been given as to when construction will resume.

The Archdiocese has gone into a dire financial condition to the point that it was forced to apply for a bank loan – apparently from Alma Bank, as The National Herald revealed – just to pay its debt.

TNH has learned that certain hierarchs from America advised the archbishop not to submit his resignation because they fear they will be next. At this moment, Bartholomew and the Synod are placed in an extremely difficult position with very few options left.

If the archbishop ultimately continues to show insubordination to the patriarch and the Synod, then the only option the Patriarchate has is to elect him to another metropolis and immediately elect a new archbishop.

Archbishop Demetrios, Geron of America, was born in 1928 in Thessaloniki. After graduating with distinction from the University of Athens School of Theology in 1950, he was ordained a Deacon in 1960 and a priest in 1964.

He was elected Bishop of Vresthena in 1967, an auxiliary bishop to the Archbishop of Athens Ieronymos Kotsonis, who had been placed on the Archbishopric Throne of Greece by the Dictatorial Regime of 1967. Demetrios’ prime responsibility was the theological education of the clergy.

From 1965 to 1971, on scholarship from Harvard Graduate School of Arts and Sciences, he studied New Testament and Christian Origins and was awarded a PhD in 1972. He then returned to the Archdiocese of Athens and undertook responsibilities for the theological education of the clergy, ministry among the youth, and other duties related to theological conferences in Greece and abroad.

In 1968, he was elected Metropolitan of Attika and Megaris, but he did not accept the post for reasons related to the canonical order of the Church and to the political conditions in Greece at that time.

Later, in 1977, he earned a ThD in Theology from the University of Athens with distinction. From 1983 to 1993, he served as the Distinguished Professor of Biblical Studies and Christian Origins at Holy Cross Greek Orthodox School of Theology in Brookline, MA. Serving as a faculty member for more than a decade, he taught many of America’s Greek Orthodox clergy. He also taught at Harvard Divinity School as Visiting Professor of New Testament during the academic years of 1984 to 1985 and from 1988 to 1989.

On August 20, 1991 the Sacred Synod of the Church of Greece elevated then-Bishop Demetrios of Vresthena to a Titular Metropolitan of Vresthena with the simultaneous elevation of the Diocese of Vresthena to the rank of the Metropolis. After several years in the United States, he returned to Greece in 1993 to pursue full-time scholarly writing and research and resumed his responsibilities at the Archdiocese of Athens.

Elected Archbishop of America on August 19, 1999 by the Holy and Sacred Synod of the Ecumenical Patriarchate, Demetrios was enthroned on September 18 of that year at the Archdiocesan Cathedral of the Holy Trinity in New York City.