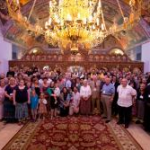 Source: Diocese of the South of the Orthodox Church in America | Noel Busch

From the perspective of a delegate, the “elephant in the room” at the recently convened Assembly of the Diocese of the South (DOS) was the thought that the principal order of business was to have been the nomination of a bishop. With the resignation of Metropolitan Jonah and the suspended status of Fr. Gerasim, one might have expected an agenda in disarray and considerable hand-wringing.

To the credit of the nearly one hundred delegates and observers, there were neither protestations nor evidence that clergy or laity had fallen prey to the twin temptations of perceived scandal or discontent. Instead, giving voice to the general tenor, Archbishop Nikon, Locum Tenens, described the diocesan community as one that is still grieving the loss of “the first apostle of the South”, Archbishop Dmitri. His Eminence stated that “the hole in our hearts cannot be filled” and that the diocese “moved too quickly in our zeal” to seek a successor.

From another perspective—that of a lay person who had witnessed the extraordinary effort to introduce Fr. Gerasim as the preferred candidate with a whirlwind tour of diocesan parishes—there appeared to be a causal relationship between the concerns over Fr. Gerasim’s readiness and Metropolitan Jonah’s resignation. A welter of questions had arisen at the parish level concerning the method of vetting candidates, the thoroughness of the DOS selection process, and the strategy of presenting only one candidate for appraisal by the laity. Regardless of whether those concerns were well-founded or not, it would appear that Fr. Gerasim’s candidacy fell victim to the more serious OCA matter of Metropolitan Jonah’s resignation, rather than Jonah’s resignation having been a consequence of concerns over the vetting of Fr. Gerasim.

Archbishop Nikon avoided definitive commentary on the matter in the Plenary Session and referred to the July 16 statement of the Holy Synod concerning the resignation of Metropolitan Jonah as dispositive, acknowledging rather that facilitating the process of identifying a hierarch for the Diocese of the South is the responsibility of the Locum Tenens, but that our first task now should be completion of a final resting place for Archbishop Dmitri. He kicked off a fund drive with a contribution of $1000 to which a number of clergy followed suit with immediate pledges.

In answer to questions concerning the Episcopal selection process, Archbishop Nikon expressed his intent of moving forward soon after the October Synod. He stated, however, that future candidates would not go on tour among the parishes, but would be vetted by the Deans and by the Diocesan Council before being presented to a Special Assembly, likely to be held in February.

Among other and related actions by the Assembly, the consideration of a draft of proposed ByLaws was deferred and truncated to address only the provisions for nomination of a bishop. The proposed process was adopted following an amendment, which will now require that, on the first ballot, if a candidate receives a two-thirds majority vote, he will be declared the nominee. The argument that an absolute majority, as originally written, is tantamount to selection by a single vote and is potentially divisive was not lost on the delegates, resulting in ready adoption of the amended provision.

Chancellor Fr. Marcus Burch echoed Archbishop Nikon, declaring that “Nothing can honor the memory of Dmitri more than our evangelization,” stating further that: “The tithe is the engine that drives the growth of the Diocese of the South.” Fr. Burch went on to express the desire that our future hierarch be “someone who will take up this yoke and work beside us” to help foster parishes that are “willing to grow and that can become mother churches” paving the way for new parishes.
A similar theme was expressed by Treasurer Milos Konjevich whose unique tithing and self-funding concept is regarded as an exceptionally effective support for diocesan growth, despite being poorly understood. That lack of understanding and the prudential demands of due diligence appeared to prompt action to fund the development of policies and procedures to lay the groundwork for a closer review.

The Plenary Session of the Assembly ended on a particularly poignant remark by Archbishop Nikon. Having stated his expectation that there would be more than one fully-vetted candidate by the October Synod, his Eminence expressed personal affection for the Diocese of the South: “By the time you find a Bishop, I am not going to want to leave.”