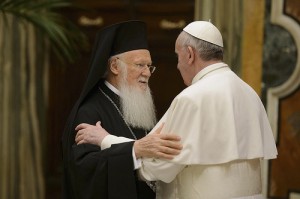 Pope Francis embraces Ecumenical Patriarch Bartholomew of Constantinople, spiritual leader of Orthodox Christians, at the Vatican March 20. The pope met with Patriarch Bartholomew before a meeting with the Christian, Jewish, Muslim, Buddhist, Hindu, Sikh and Jain delegations that had come to the Vatican for his inauguration. (CNS photo/L’Osservatore Romano) (March 20, 2013) See FRANCIS-DIALOGUE March 20, 2013.

Amid the crush of news reports in the past month that followed Pope Benedict’s unprecedented resignation from the papacy, one of the most intriguing was the decision by His All-Holiness, Ecumenical Patriarch Bartholomew, to attend Pope Francis’ installation as Bishop of Rome. The occasion is being presented in the media as something that has not happened since the ecclesiastical schism that separated Christian East and Christian West in the eleventh century. But that characterization is almost certainly wrong–this is quite likely the first time in history that a Bishop of Constantinople will attend the installation of a Bishop of Rome. And this is a profoundly bold step in ecumenical relations between the Orthodox and the Roman Catholics, one that could have lasting significance.

Prior to the sixth century, the election of a Roman bishop was a local affair. In most cases, the new pope was chosen from among the city’s clergy and was typically either the eldest priest or the eldest deacon. There were a few exceptions, but this was the typical pattern. News of an election would circulate throughout the Christian world but that news flow would have been too slow to enable high-ranking Church officials from the East to travel to Rome for the event.

During the sixth century, Byzantine armies conquered the Italian peninsula, returning the city of Rome to the imperial Roman government, now centered in Constantinople. In this context, which lasted from the mid-sixth century until the loss of Byzantine influence in Italy in the eighth century, the election of a new Roman bishop required the approval of the Byzantine emperor (the same, of course, was true of the election of a new Ecumenical Patriarch). Under such an arrangement, papal elections took longer but there still would be no reason for an Eastern Patriarch to travel to Rome for the installation. 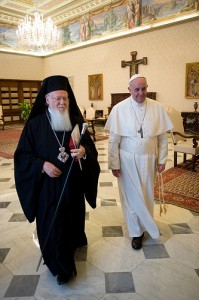 Pope Francis walks with Ecumenical Patriarch Bartholomew of Constantinople at the Vatican March 20. The pope met with Patriarch Bartholomew before a meeting with the Christian, Jewish, Muslim, Buddhist, Hindu, Sikh and Jain delegations that had come to the Vatican for his inauguration. (CNS photo/L’Osservatore Romano) (March 20, 2013) See FRANCIS-DIALOGUE March 20, 2013.

There are a few examples from this Byzantine period, such as the election of Pope Pelagius I in 556, where the man elected to be the Roman bishop was actually in Constantinople at the time of his election. While it is possible that the sacramental ceremony to install the new pope could have occured in Constantinople–whereby the Patriarch of Constantinople would have been present–it is far more likely that the official ceremony would have occurred in Rome and, therefore, would have been conducted without the Patriarch’s presence.

At the conclusion of Byzantine influence in papal elections in the eighth century, the election of Roman bishops returned, again, to local considerations. And, as geo-political factors continued to push Italy and the Eastern empire in separate directions, relations between individual popes and patriarchs became more sterile and distant–indeed, between the ninth and fifteenth century there are only one or two occasions where a Roman bishop and an Ecumenical Patriarch ever met in person.

With all of this in mind, His All-Holiness’ decision to travel to Rome for Pope Francis’ installation as Roman bishop is an extraordinary event in the history of Christianity. And it is significant for reasons far beyond its novelty. First and foremost it is a powerful symbolic gesture for the cause of Christian unity. It demonstrates in unprecedented fashion the extent to which the Ecumenical Patriarch considers the relationship with the Roman Catholic Church to be a priority. For their part, members of the Vatican staff have responded to this grand gesture and have arranged for the reading of the Gospel at the installation to be sung in Greek (rather than Latin) in recognition of the fact that the Ecumenical Patriarch has taken this unprecedented step.

The Christian world has been divided for so long that the establishment of an authentic reunion will require courage, leadership, and humility. It will also require a foundation in common faith and concerns. Given Pope Francis’ well-documented work for social justice and his insistence that globalization is detrimental to the poor, it would appear as though the Orthodox and the Roman Catholic traditions have a renewed opportunity to work collectively on issues of mutual concern. With our Lord’s assistance, that common cause can be transformed into more substantive theological work. But such work requires a first step and it would appear as though Ecumenical Patriarch Bartholomew is willing to take such a step.