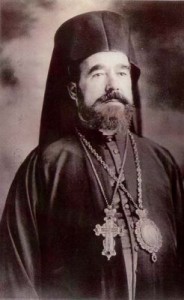 Originally published in the June 2013 issue on page 26 under the heading “Church History.”

As the Church in America grew, the need for hierarchs to oversee the ever-increasing number of parishes became more acute. Hierarchs of the Church had visited the United States since 1892, but most returned to Greece after only a brief stay.

Before the arrival of Archbishop Athenagoras in 1931, only one hierarch, Bishop Alexander, remained for more than a

decade. When the Archdiocese of North and South America was created in 1922, he became its first Archbishop and the

only hierarch for the entire Western Hemisphere. There were nearly 200 parishes at this time, far more than could be effectively overseen by one person.

The constitution of the Greek Orthodox Archdiocese of North and South America, drawn up in August 1922 by the second Clergy-Laity Congress, recognized the pressing need for more hierarchs. According to its provisions, there would be dioceses in Chicago, Boston, and San Francisco to join the Archbishop’s see in New York. The Diocese of Chicago was the first to elect a bishop at a special ecclesiastical assembly convened by the Archbishop and including all clergymen of the diocese and a lay representative from each parish.

Among priests who graduated from theological seminaries recognized by the Ecumenical Patriarchate, three would be nominated and voted on by the assembly.

The ecclesiastical assembly met on April 18, 1923, at Sts. Constantine and Helen parish in Chicago. The 31 clergy and 21 lay representatives in attendance voted by secret ballot, and the results were forwarded to the Ecumenical Patriarchate. Archimandrites Philaretos Ioannides (1886-1961), and Joachim Alexopoulos (1874-1959) received the most votes. Archbishop Alexander, in a letter dated May 8, informed the faithful that the Holy Synod of Constantinople had elected Archimandrite Philaretos bishop of Chicago.

Born in Samos in 1886, Bishop Philaretos studied at Mount Athos and the University of Athens before coming to the United States in July 1919 for post-graduate work. On the recommendation of Meletios Metaxakis, the metropolitan of Athens, he studied at the Nashotah House Episcopal Seminary (1919-20) in Wisconsin. He continued his studies at the Western Theological Seminary in Chicago.

As a deacon, he participated in the consecration of Annunciation Church in Buffalo. Following his ordination as priest, he briefly served in San Francisco before becoming dean of the St. Athanasios Seminary (1921-23).

His consecration ceremony was held at Sts. Constantine and Helen in Chicago on June 21, 1923. Two hierarchs were required to be present at the consecration of a bishop.

The Syrian and Russian churches abstained from participation in the ceremony because they did not wish to become involved in the turbulent Greek politics that plagued the Church at this time.

As a result, Metropolitan Germanos, head of the Church in Western and Central Europe, was brought from London; he arrived in New York on June 15.

From his election in 1923 until 1927, Bishop Philaretos also served as hierarch locum tenens of the San Francisco Diocese and was therefore responsible for parishes from Ohio to California, an enormous area that is now administered by the Metropolises of Atlanta, Chicago, Detroit, Denver, Pittsburgh, and San Francisco. He was charged with bringing order to the parishes, despite the fact that many considered themselves self-ruling and did not easily submit to the hand of a  hierarch. Politics further complicated his work. Although he had been elected in accordance with the constitution of the Archdiocese, many Royalist parishes considered Bishop Philaretos, the Diocese of Chicago, and the Archdiocese itself as an extension of the Venizelist political faction in Greece, and refused to recognize their authority.

On Aug. 3, 1930 at the Cathedral of St. Basil in Chicago, Bishop Philaretos announced his resignation. In his farewell statement, he recounted that during his eight years as bishop he had established 30 schools, organized and founded 14 new communities, and built 13 churches.

He had also officiated at 325 liturgies, and had given 75 lectures, and ordained six priests, three of whom were graduates of American institutions. He also mentioned his regret that he had not been able to accomplish all his dreams. He had also hoped to establish an orphanage, a retirement home, a free hospital, a cemetery, a seminary, and a monumental cathedral in Chicago.

Following his resignation, Bishop Philaretos returned to Greece and became the Metropolitan of Syros and Tynos, where he served until his death on June 8, 1961. He left America following a special Divine Liturgy on the Feast Day of St. Gregory at St. Basil’s Cathedral in Chicago in late January 1931. Forty-five clergy from the Diocese served at this Liturgy.

As he prepared for his new assignment, Bishop Philaretos offered these parting words: “The last sorrow that fills my heart is that I am separated from my beloved flock, which for many years I cared for and nourished with fatherly love and love in Christ.

“Those who have refused to accept my advice and obey the voice of the church, are forgiven and are blessed. Those who obeyed and cooperated in uplifting the dignity and sacredness of the church are blessed, and as a father, I extend my appreciation and thankfulness to them.”

Bishop Philaretos served the Church in America during its most troubled and chaotic time, but his work laid a solid foundation upon which Archbishop Athenagoras and later hierarchs of the Church would build.

The author thanks Adam Strohm of the Newberry Library in Chicago and Laura Hummer of Nashotah House for their assistance. He invites readers to share their thoughts by contacting him at htgochistor[email protected] or 330-452-5162.