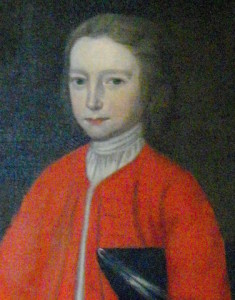 Philip Ludwell III is the first known convert to Eastern Orthodox Christianity in the Americas. He was a prominent figure in pre-revolutionary Virginia and a relative by blood or marriage of many great early figures in American history from George Washington to Robert E. Lee. The scion of one of the largest landholding and politically prominent families in early Virginia, he was born at Green Spring near Williamsburg on December 28, 1716.

One year after his marriage to Frances Grymes in the summer of 1737, the young Ludwell travelled from Williamsburg to London, England. Twenty-three years later, in 1761, the Orthodox priest in London, Fr Stephen Ivanovsky, wrote:

In 1738, during the incumbency of the late Hieromonk Bartholomew Cassano at this holy Church, an English gentleman named Ludwell, born in the American lands and living there in the province of Virginia, came to London seeking the True Faith, which he, with God’s help, has swiftly found in the Holy Graeco-Russian Church. And so on the 31st of December of the same year he was confirmed in the same with the holy Chrism.

In 1740 Ludwell returned to Virginia. From 1742 to 1749 he was a member of the Virginia House of Burgesses where he argued for higher taxes on the importation of African slaves and headed a committee to seek a cure for cancer. In 1752 he became a member of the Royal Governor’s Council and served in this capacity until his death in 1767. As a member of the Council he was instrumental in obtaining a commission for a young George Washington as a Colonel in the Virginia militia in 1755.

Meanwhile he continued to secretly practice his Orthodox faith, which at that time was treasonable. At some point in the 1750s he embarked upon an English translation of the “Orthodox Confession of the Catholic and Apostolic Eastern Church”, composed in 1640 by the Orthodox Bishop Metropolitan Peter Mogila of Kiev. Ludwell dedicated his translation to “the devout Christian reader,” and quoted the prophet Jeremiah:

Thus saith the Lord, Stand ye in the Ways, and see, and ask for the old Paths, where is the good Way, and walk therein, and ye shall find Rest for your Souls.

In 1760 he moved with his daughters to London where they were received into the Orthodox Church on Holy Wednesday, 1762. In the same year, with the blessing of the Holy Synod of the Orthodox Church of Russia, Ludwell’s translation of Mogila’s catechism was published in a cloth edition. The Russian Synod also authorized Fr Stephen Ivanovsky in London to give the Ludwell family the consecrated elements of bread and wine to take back to Virginia and to prepare for them appropriate forms of Orthodox prayer for use in their native land.

One extant copy of what may be this ordo has been found in bound, but handwritten, form. It includes translations of the three principal Orthodox liturgies, morning and evening prayers, the service of confession and other texts.

Philip Ludwell died in London on March 14, 1767 after a long illness. His funeral rites were served at the Orthodox Church there and he was buried at the Anglican church of St Mary Stratford Bow where there was a family vault. Over two hundred years later his life and inspiring story of faith is becoming known and reshaping our view of early America.