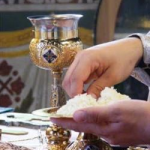 The Nativity Fast in the Orthodox Church begins on November 15th. From that time until December 17th (or some observe December 12th) we fast from meat, milk products, and eggs, though fish is allowed. After the 17th (or 12th) we fast also from fish. But fasting from food, according to the command of our Lord, must go hand in hand with spiritual fasting in order for it to be beneficial and have a deeper meaning. For this reason it must be coupled with prayer and almsgiving. Hence, with these fasting periods the Church calls us also to a deeper liturgical life and good works.

It is for this reason that during the forty day period prior to the celebration of the Nativity of our Lord it is a tradition for priests to celebrate daily the Divine Liturgy. The Forty Liturgies celebrated during this time are a great blessing not only for those who participate, but also for those commemorated among both the living and reposed. As St. Ignatius of Antioch writes: “Take heed, then, often to come together to give thanks to God, and show forth His praise. For when you assemble frequently in the same place, the powers of Satan are destroyed, and the destruction at which he aims is prevented by the unity of your faith” (Eph. 13).

The power of the Divine Liturgy isn’t magical, but it is a manifestation of love and unity in Christ. It teaches us to forgive, to have love for one another, and to be united in Christ as one body. In such an assembly, where the living and reposed are commemorated, great blessings follow for all.

The Divine Forty Day Liturgies of the Nativity season on behalf of the living and reposed are a manifestation of the love we should have for one another as members of the Church. Nothing makes more real and present the love of Christ for mankind, who took on flesh for the salvation of sinners, then the daily offering of the Divine Eucharist for the forgiveness of sins and life everlasting of the living and reposed.

As St. John of Kronstadt writes: “In the Divine Liturgy is celebrated the Mystery of Love…perfect love…. This love is found in the sacrifice of Christ.”

Elder Paisios advised regarding the need to pray for the departed: “Leave in your prayers room for the reposed. The dead can do nothing for themselves. The living can. Bring to the church prosphoro, and give the names of the reposed to be commemorated by the priest in the proskomede. Do also memorials and trisagia. But the trisagion without the Divine Liturgy is nothing. The greatest thing we can do for someone is Forty Liturgies. It would be good to tie it in together with almsgiving.”

St. Symeon ofThessaloniki writes of the commemoration of the reposed during the Divine Liturgy: “During the Liturgy their portion which is placed on the diskos invisibly partakes of God, they are cleansed through the Sacred Blood and commune,…and they are consoled…and they rejoice in Christ.”

St. John Chrysostom writes: “You should not have any doubt whatsoever that the dead will benefit spiritually. The priest does not plead in vain in the Holy Prothesis or at the Holy Table for the reposed in Christ, with faith in the God-man Lord.”

On the Benefits of Forty Liturgies For the Departed