[ditty_news_ticker id="27897"] The Fragile Promise of the Pan-Orthodox Council 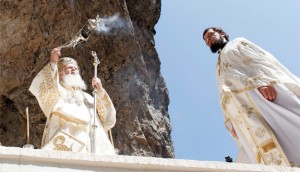 Ecumenical Patriarch Bartholomew of Constantinople celebrates an Orthodox liturgy for the feast of the Dormition of Mary at the Panagia Soumela Monastery near Trabzon, Turkey in August 2010. The Patriarch will preside over the Orthodox council to be held in Constantinople in 2016. (CNS photo/Umit Bektas, Reuters)

The announced 2016 council of Eastern Orthodox Churches is historical, but expectations should be modest

An Assembly (Synaxis) of the Primates of the local Orthodox Churches, meeting March 6-9, 2014 in Istanbul, has agreed to convene a Pan-Orthodox council. A “Communiqué of the Primates of the Orthodox Churches” released on March 9th stated that “the Holy and Great Synod of the Orthodox Church … will be convened and presided by the Ecumenical Patriarch in Constantinople in 2016.” This decision brings to the homestretch a long process of preparation that goes back as far as the 1920s, had an active phase in 1960s and 1970s, and then was rather quiet until very recently.

The last Pan-Orthodox council of this scale was convened in Constantinople well over a thousand years ago, in 879-880, when Photius was reinstalled to the Patriarchal throne. That council dealt mostly with the issues of inter-Church relations and had wide representation of the Eastern Christian Churches, with over 380 bishops in attendance. Some Orthodox believe that the IV Council of Constantinople (its other name) was the eighth and last ecumenical council.

After Byzantium lost most of its territories, the councils of the same scale became impossible. Nevertheless, the Eastern Church continued exercising its synodality. Many Eastern bishops and even Patriarchs were unable or did not want to stay with their flocks on the occupied territories. They either preferred,or had no choice but to spend most of their time in safe Constantinople. The old institution of endemousa synod—that is, a gathering of all bishops who, by chance, found themselves in the capital—became a major instrument of the Church’s synodality. Not only the hierarchs under the jurisdiction of Constantinople, but also bishops and even Primates of other Patriarchates, participated in such councils, which managed ecclesial matters related not only to the Church of Constantinople but to the entire Eastern Church.

Many Primates who participated in the Synaxis were also active participants in the previous preparatory meetings. They clearly want to accomplish this important work, which has been a major focus of their lives, as well as the lives of their teachers and predecessors. If the council does take place, it will summarize the history of the Orthodox Church of the last century and will be the most important event in modern Orthodox history.

That the Pan-Orthodox council has been scheduled for 2016 is of great significance. The question remains, however, as to how effective it will be in addressing the issues that really matter for the Orthodox Church. There also remains also a real possibility that the council can and will be postponed. A postponement would take place if the tensions between local Orthodox churches become more intense, or something transpires within inter-Orthodox relations making council impossible. Simply put, the inter-Orthodox peace is still very fragile.

The participants in the Synaxis were obviously aware of these risks. In order to minimise them, they adopted a roadmap towards the council. An inter-Orthodox preparatory committee will be set up, which will work from September of this year to Easter Sunday of 2015 (April 12th). This committee will work on the documents that will be considered at the council, and on the details of its procedures. It will also quickly intervene if difficult issues arise in inter-Orthodox relations during the period before the council.

The Synaxis in Istanbul much time discussing the format of participation of the local Churches in the council. The agreement is that each Church will send 24 bishops plus the Primate of the Church, a number doubled from 12 bishops, plus the Primate, which was agreed in the midway. Because some Orthodox Churches (for instance, Cyprus, Poland, Czech Lands and Slovakia) do not have so many bishops, those Churches can send as many bishops as they have. The initial idea to allow these Churches to “borrow” bishops from other Churches was abandoned. The number of the participating bishops does not necessarily matter, because each Church will have only one vote. Only the autocephalous Churches (whose head bishop does not report to any higher-ranking bishop) will have right to vote. The autonomous churches (whose highest-ranking bishops are approved by the patriarch of an autocephalous Church) will be able to participate in the council only through their “mother” Churches. Decisions will be taken only if there is a consensus among the voting Churches. Finally, all the sessions will be presided over by the Patriarch of Constantinople—a point listed first among the decisions of the Synaxis regarding the procedures of the council.

These decisions of the Synaxis are the result of compromises achieved through very tense negotiations. The main protagonists of the negotiations were the Patriarchs of Constantinople and Moscow. Other Primates contributed mostly by suggesting solutions that would satisfy the two sides.

The Patriarch of Moscow initially suggested that all Orthodox bishops should take part in the council. Other Churches did not accept this proposal since it gave the Russian Orthodox Church, with its over 320 bishops, a distinct advantage. Instead, a limited number of bishops from each Church was accepted, which gave the Church of Constantinople with its allies an advantage over the Russian Church. To balance this decision, the Russian Church insisted on the procedure of consensus in taking decisions by the council. (Consensus means a right to veto for each Church and effectively neutralises the numerical majority of the Churches.)

This means that the compromise about the procedures significantly reduces the possibility of the council accepting any decision regarding burning issues. Only the council could have an authority to take such a decision, and yet it has been a prioriparalysed in addressing the issues that divide the Orthodox Churches in our days. This is one of the weakest points of the upcoming council.

The most divisive issues on the Orthodox agenda relate to the relations between the local Churches. The models of these relations are constantly evolving, reflecting global political frameworks. Understandings of the fellowship of the Orthodox Churches changes constantly, and there is no agreement on it. Some Churches consider this fellowship in terms of an utilitarian cooperation of sovereign entities, which safeguard their territorial integrity and punish any intruder, including another local Church. This philosophy reflects the logic of international law and, particularly, the idea of sovereignty of the national states. Other Churches believe the pan-Orthodox fellowship should be regarded as a confederation (or even a federation) of local Churches, with an effective and not just ritualPrimus. The upcoming council could help in moving to an acceptance of a single philosophy of the Orthodox fellowship, although that is unlikely.

Two particular points of this philosophy were chosen decades ago for the agenda of the Pan-Orthodox council: the diptychs (the order) of the Churches, and the procedure of granting autocephaly (which means, literally, “self-headed”). Since it very unlikely the Churches could reach an agreement on both issues they were excluded from the agenda of the council. The issue of granting autocephaly has an immediate implication in Ukraine. The Synaxis dedicated a disappointingly laconic text to the situation in Ukraine:

We fervently pray for peaceful negotiation and prayerful reconciliation in the on-going crisis in Ukraine. We denounce the threats of violent occupation of sacred monasteries and churches, and pray for the return of our brothers presently outside of ecclesiastical communion into the Holy Church.

There is no mention of the bloodshed during the recent protests in Kiev and of the military aggression against Ukraine, where the majority of population is Orthodox. The laconism of the statement apparently reflects the deep tensions over Ukraine; the Primates of the Churches did not want to really touch on the Ukrainian issue, in order to save the council. Any meaningful discussion and message regarding the crisis in Ukraine would have probably destroyed the process of council’s preparation.

The position of the Orthodox Churches on the issue of primacy of the Bishop of Rome depends entirely on the consensus on primacy within the Orthodox Church. Yet there is no such a consensus on this issue; instead, there are two dominating interpretations. According to one of them, primus inter pares (“the first among equals”) is just an honorary title, a rudiment of the past, which does not imply any real authority of the first Church.Inter pares is accentuated in this interpretation, which was recently expressed in the document adopted by the Holy Synod of the Russian Orthodox Church, Position of the Moscow Patriarchate on the problem of primacy in the Universal Church.

The two interpretations of primacy seem to be irreconcilable. And it is very unlikely that the Pan-Orthodox council can accept a single Orthodox interpretation of Primacy. Without this, however, it will be difficult to proceed in the Orthodox-Catholic dialogue.

In conclusion, it seems that the current leaders of the Orthodox Churches are resolved to be etched in history as the fathers of a council, which in the Orthodox world will be regarded on the same scale with the ecumenical councils of the first millennium, (although, in the Orthodox tradition, only the following council can accept such a council as ecumenical). In contrast to the first ecumenical councils, however, this one will not touch on many of the dividing issues, which have been excluded from its agenda. This fact demonstrates the fragility of inter-Orthodox unity and cooperation. God performs miracles, however, and there is always a chance that the council will exceed its tentative agenda, and thus provide a more firm and viable framework of cooperation between the Churches.

Fr. Cyril Hovorun is a priest of the Russian Orthodox Church (Moscow Patriarchate), and currently a researcher at Yale University. From 2007 to 2009 he was Chairman of the Department of External Church Relations of the Ukrainian Orthodox Church and initiated the first attempts at dialogue with the non-recognized Orthodox Churches in Ukraine. He has participated in official Catholic-Orthodox dialogue, and is also a member of the St Irenaeus group, which constitutes an unofficial dialogue between the Orthodox and Catholic theologians. From 2009 to 2012, he was the first deputy chairman of the Educational Committee of the Russian Orthodox Church. He is the author of Will, Action, and Freedom: Christological Controversies in the Seventh Century(Brill, 2008).