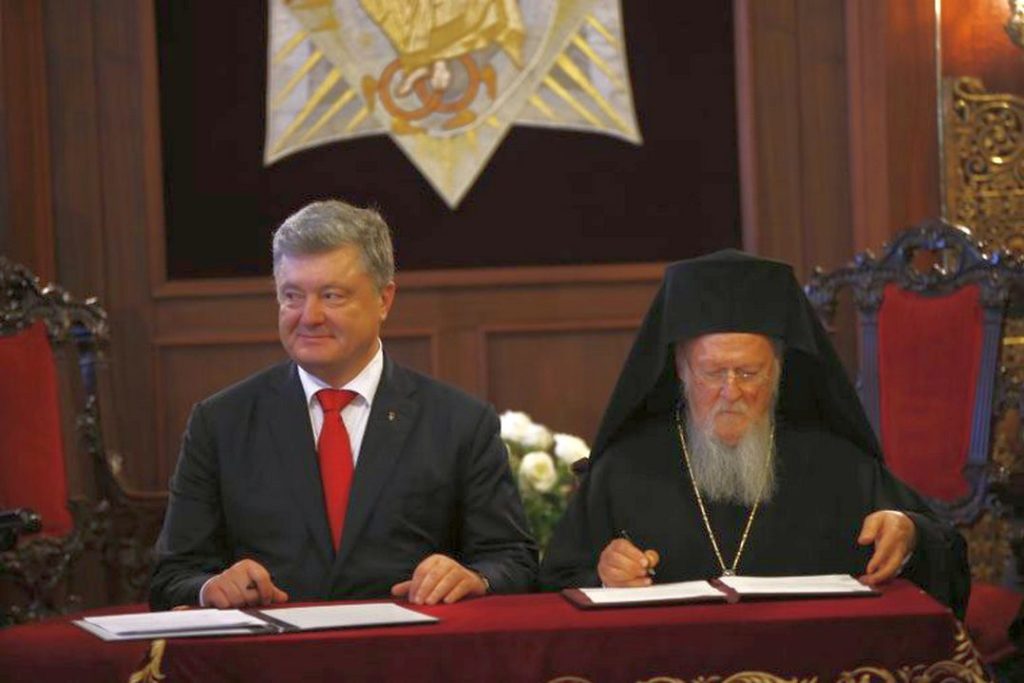 Moscow’s interest in Eastern Orthodoxy is an integral part of Russia’s geopolitical grand strategy with the Middle East and central to its ambitions. Moscow has supported the regime in Syria in order to maintain its naval facility, however, there are other considerations, especially religious matters. The naval base located in Tartus, a city in Northern Syria, is the only foreign Russian base. In 2017, Moscow signed a new lease with Bashir al-Assad that will permit Moscow to expand the base and service larger Russian warships.

The base enables the Russian navy to maintain a battle fleet in the Mediterranean and not depend on going through the Dardanelles Straits to and from the Black Sea to service their ships. It certainly explains why Mr. Putin has been so eager to support the Syrian dictator, but under the best of circumstances regardless of the number of warships the Russians will be able to maintain in the Mediterranean it will be considerably less effective than the overwhelming superiority of the American sixth fleet.

Yet, it seems vital for the Russians to project military power in the Middle East.

Historically, the region has been linked to Russian geopolitical ambitions. The Middle East is connected to the Near East and in turn to the Far East. Traditionally, Russian Tsars attempted to gain control of these regions and expand Russian interests in the vacuum of the decaying Ottoman Empire, to secure their lines of communication to the Far East and to dominate the Holy Land. In the past and present context, religion has been a major factor in Russia both as part of culture and as a means of control.

Russian expansion in the 19th century could only advance east and south. In the west Russia confronted entrenched French, German and British interests. After the Napoleonic Wars, the Western European great powers developed a fear of Russian ambitions and dreaded the prospect of massive Russian armies overrunning Europe.  Subsequently, the European powers made every effort to stymie Russian expansion.

In the early 19th century the Europeans tried to co-opt the Russian Empire in maintaining European security. The Russians played a critical role in defeating Napoleon and afterwards contributed to the reestablishment of a conservative order in Europe. When the Greek War of Independence broke out in 1821, the Russians remained committed to the Concert of Europe established by the Congress and Treaty of Vienna and did not intervene. The Russians only did so in 1827 at the Battle of Navarino as part of a coalition with Britain and France.

However, Tsar Nicholas I, unlike his predecessor, abandoned rapprochement with the Europeans and turned to the East and South – fundamentally expansion at the expense of the Ottoman Empire. In 1828-1829 the Russians went to war with the Ottomans because the Sultan had closed the Dardanelles Straits. The ottoman forces were defeated and in the Treaty of Adrianople (1829), Russia took control of the Eastern Shore of the Black Sea and the mouth of the Danube in the Balkans.

This was the beginning of a new wave of Russian expansion and by the end of the 19th century, the Russians conquered the Caucasus and continued their drive to the Far East which brought them into conflict with the British Empire in India. In 1830, both powers engaged in the so-called “Great Game” fought over control of the Northwest Frontier, which made Afghanistan into a battleground for the remainder of the 19th century.

British policy began to shift from fear of France to a strategy of containing Russia in Europe as well as in Asia. Imperative to Britain’s grand strategy was to bottleneck the Russian fleet in the Black Sea to keep it out of the Mediterranean. The Straits Convention of 1841 restored the ancient rights of the Ottomans, which meant that the Sultan could close the Straits to all warships except for Ottoman allies. It was the policy of the British to use the Ottoman Empire to check Russian ambitions in the Middle East and in Asia. To that end Britain had to prop up a corrupt Ottoman regime that otherwise would have fallen under the control of Moscow.

Russia by the middle of the 19th century became a very large empire encompassing extensive numbers of people with disparate cultures and religions, which Moscow attempted to homogenize into a nation. Towards this end, successive Russian governments co-opted the Moscow Patriarchate and its priests as the foot soldiers of the Russian empire. The Russian Church became a mechanism of control in Ukraine and the Baltic states as well as a proselytizing force in the conquered territories of the Caucasus and the East and North coasts of the Black Sea.

Russian expansion proceeded at the expense of the Ottoman Empire and in the middle of the 1840;s Moscow turned its attention to Jerusalem. The Latins (Catholics) and Greeks had been competing for control over the Church of the Holy Sepulchre and the other sacred sites in the Holy Land ever since the Ottoman conquest of the region in 1516. In 1851, the French managed to persuade the Ottomans that the “Latin right” to the holy places had been established. This was an affront to the Tsar and two years later the Crimean War broke out in 1853 with Russia fighting Britain, France, Italy, and the Ottoman Empire. The Tsar’s armies were defeated and the Russians faced a major setback for their ambitions in the Holy Land and access to the straits.

The Crimean War was the first religious conflict since the Reformation struggle in the 16th century. Therefore, in a way, for the Russians the conflict was over a combination of geopolitical interests and religion. By the middle of the 19th century, consequently, Eastern Orthodoxy was intertwined with Russian nationalism and formed the basis of the Tsarist state. Today it is an integral part of contemporary Russian identity.