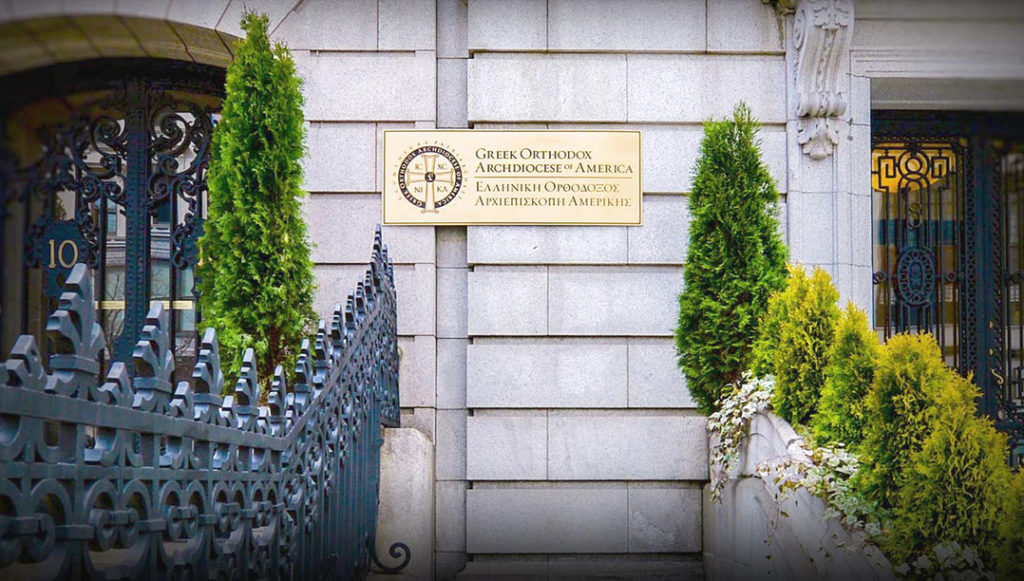 Entrance to the Headquarters of the Greek Orthodox Archdiocese of America. Source: ww.goarch.org.

The Wall Street Journal and the New York Times recently reported at length about the serious problems engulfing the Roman Catholic Church and the Southern Baptists. The Greek Orthodox Archdiocese faces challenges of a different but equally dangerous nature. For more than forty years, it has experienced a steady decline in membership, constant closing of more Church-sponsored Greek schools, and a chronic shortage of priests.

The peak in church membership came in the 1970s, mainly due to the impact of nearly two hundred thousand Greek immigrants (1960-1980). The newcomers were educated, mainly raised in urban environments, and had American relatives to aid their transition. They immediately became active in local parishes. Many thought the Church had become too Americanized. Disputes in Chicago around this issue were particularly bitter and took more than a decade to resolve. Elsewhere, their energy blended more smoothly with the established Greeks. In New York, the new immigrants were a major factor in transforming the multi-ethnic Astoria section in Queens into a Greek cultural center and the new immigrants often were crucial in establishing Modern Greek Studies programs in universities.

The Second Wave immigrants soon found themselves sharing more concerns and commonalities with established Greek-Americans than they had thought possible on their arrival. Like the established generation, second-wave parents saw that their children rarely married other Greeks or even others of the Orthodox faith.

Archbishop Iakovos (1959-1996) welcomed the new immigrants. His immediate programmatic response was to absorb as many secular Hellenic activities as possible to make the Church the centerpiece of Greek America. This ranged from creating gyms for young people and funding social clubs aimed at different age groups with varied interests to actively welcoming non-Greek spouses. In short, he strove to make Hellenism as synonymous as possible with Greek Orthodoxy rather than Classical Greece.

Iakovos also attempted to reach out to other Orthodox communities to establish regular contacts and joint ventures. He was rebuffed as even the smallest Orthodox ethnic groups feared their own prized culture would be overwhelmed by the Greeks. Most problematic was the Russian Orthodox Church which thought it, not the Greeks, should head Orthodoxy in America. The American Russians also backed Moscow’s ambition to replace the besieged patriarchate in Turkey with which the American Church is formally affiliated.

Archbishop Spyridon (1996-1999) pushed some of Iakovos’ initiatives to extremes. He worked to fashion a Church whose Greek dimensions would be intensified. He also insisted that all parishioners be held to stricter religious standards. The short-term results would be a smaller but more sharply defined Church. Spyridon thought once that model was in place, its coherency and vigor would be attractive to those who wanted to identify with a Church firmly rooted in the creed and rituals established in the earliest years of Christianity by Greek clergy in the Eastern Mediterranean. These clergy had determined which texts attributed to the apostles were valid. In short, they had shaped the New Testament.

Spyridon’s views and personality were not popular. He was soon replaced by Archbishop Demetrios (1999-2019). Although known for his spirituality, Demetrious had terrible managerial skills.  The existing problems accelerated, especially the growing lack of clergy which left even reasonably seized parishes without a residential priest. Tens of millions of dollars were spent on creating the Saint Nicholas Shrine as part of the World Trade Center restoration, but unpaid bills had stalled construction to zero by the time Demetrios was dismissed.

The first years of the reign of Archbishop Elpidophoros (2019- ) have mainly been consumed with restoring order and confidence in the Church. Elpidophoros has reined in Metropolitans who were operating regional fiefdoms, often ignoring the wishes of the Archdiocese and local parish councils. He organized experienced Greek-American businessmen to financially salvage St. Nicholas, which will have its ‘Thiranixia –  Grand Opening’ service in November.  These are remarkable accomplishments, but the basic problems germinating for decades have not yet been addressed.

Church membership is still declining and those born into Greek Orthodox households still have the highest abandonment rate of any Christian domination. The national Church is financially dependent on donations by a handful of the super-wealthy and parishes depend on their annual Greek Day food fests to stay in the black.

Regarding its long-term future, the Church needs to specifically plan methods to reach multi-ethnic Greeks, the lapsed faithful, and if desired, non-Greeks. Most critical is that the majority of Greek-Americans are now of mixed ethnic heritage which means they must choose to be Greek rather than inherit that identity. Reaching out to them and non-Greeks requires great communications skills, involving social media amid evolving cultural norms. There are no ready solutions, and trial and error will have its failures. What cannot be denied is without significant attempts to rebuild the parishes, lacking some unexpected event, the Church’s decline may soon reach the point of no return.