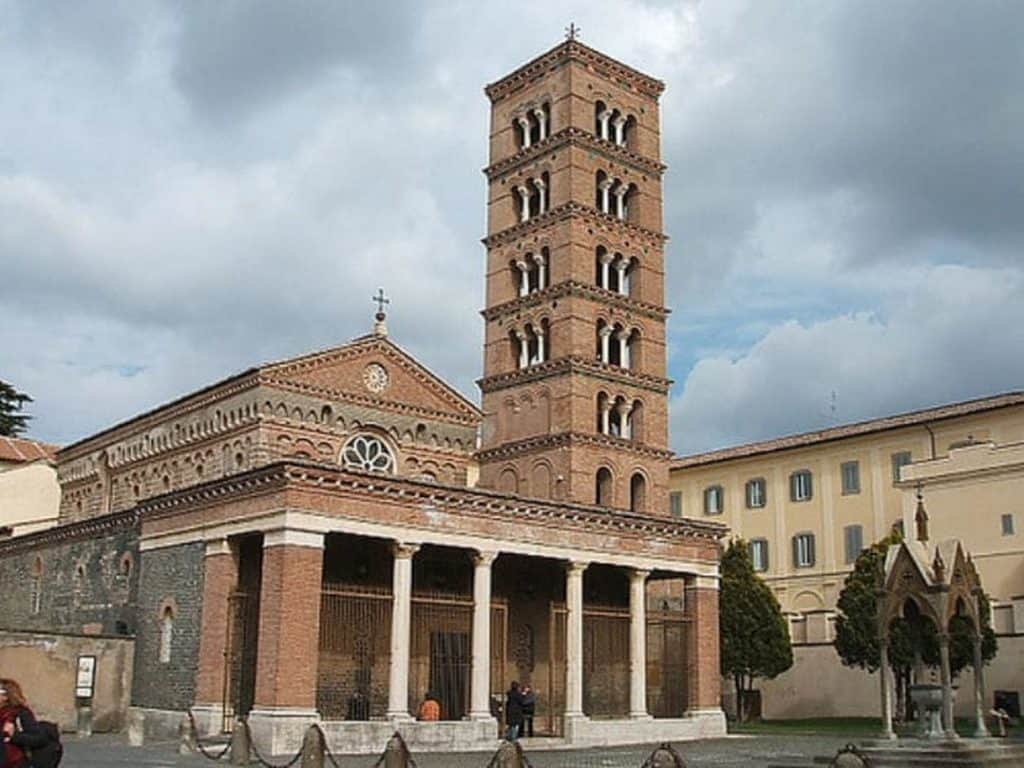 The monastery at Grottaferrata Abbazia. Credit:lepacifique’, CC BY 2.0/Wikipedia

A Greek Orthodox monastery, founded more than one thousand years ago is thriving just south of Rome, Italy in the epicenter of Catholicism.

The monastery is a remnant of ten monks belonging to the Byzantine rite Basilian order, loyal to the Pope but clinging to their traditional Greek liturgies. Against all odds keeping the faith alive and managing to thrive as book restorers in their monastery.

Part of a 1600-year old order established by St. Basil in the year 356, the men of the Grottaferrata Monastery still follow the ascetic pattern of prayer and work that the Byzantine saint drew up so many centuries ago.

The delicate Italianate architecture and surroundings of the monastery, including an elegant Campanile, or bell tower, belie the Greek roots of their faith. A monk called St. Nilus founded the abbey more than one thousand years ago, in 1004, decades before the fateful Great Schism between Eastern and Western Christianity in 1054.

St. Nilus, born in Rossano, in Calabria, came from a Greek family, according to the monastery’s historical records. At that time, Calabria was under Byzantine rule and was truly Greek in language, culture, and spiritual and liturgical tradition.

The saint had already founded several monasteries in Calabria and in Campania. Though a humble man, he was held in high esteem by princes, emperors and popes.

The monks in his order had been attracted by the wonderful ruins of a Roman villa, on the Tuscola hills, and by a low four-sided building dating back to the Republican era of Rome, which had been adapted as a Christian oratory since the 5th century.

St. Bartholomaeus with other monks worked for 20 years building the Church, utilizing the material which had been abandoned in the Roman villa: pillars and pieces of marble, sculptured eaves and peperino blocks. The church was completed in 1024, already beautifully decorated with marble, mosaics and paintings.

Pope John XIX consecrated the monastery on December 17th, 1024, dedicating it to the Mother of God, while the monks sang Greek hymns which Brother Bartholomaeus (later Saint Bartholomaeus) himself had composed for the occasion. The imposing medieval battlements around the hilltop town just south of the city of Rome harken back to the internecine warfare common between the great Italian cities in those times.

Reuters recently interviewed the brothers who remain at the monastery, who doggedly maintain their lifestyle which features constant prayer along with the work that feeds them and allows them to live communally.

Brother Claudio Corsaro, 27, abandoned a promising career as an opera singer to become a monk at Grottaferata. He sings now for the glory of God in the monastery’s chapel during services.

“I was only six years old when I felt the Lord for the first time but I fully realized my vocation many years later, when I had already started my singing career,” he told interviewers while strolling between olive trees on the monastery grounds.

Corsaro and his monastic brothers could easily be taken for Greek Orthodox monks, since they dress in the habit of Orthodox churchmen, including flowing black robes and the traditional flat-topped hat, or kalimavkion.

Living on the edge in the modern world

Devoted to a life of prayer and work, the ten monks, aged between 23 and 89, are among Italy’s last remaining Byzantine-rite Basilian religious. Employment in such endeavors as book restoration and olive growing helps them keep body and soul together — but they are living on the edge, having so few members to keep their way of life going into the future.

Back in 1054 when the Great Schism occurred, the Grottaferrata monks chose to remain faithful to the Pope in Rome rather than switch allegiance to the newly-established Orthodox patriarch in Constantinople, now Istanbul.

But they still continue to worship in the Eastern, Byzantine rite, including celebrating the Divine Liturgy in ancient Greek. Of course, most Catholics in the West say the Mass in their local languages, and occasionally in Latin.

Their daily regimen begins at 5:30 AM with individual prayer followed by communal worship. Then there is always either work in the vegetable garden and olive groves, painting icons, study, and chores.

A typical day for the monks, after early prayers, breakfast and work, is followed by a short rest followed by rest, the saying of vespers, more work, more prayer and then early to bed.

A special area of the monastery is devoted to the exquisite art of book restoration. Since 1931 the Badia Greca in Grottaferrata has been the home of the Laboratory for the Restoration of Ancient Books and Manuscripts, the first scientifically-based laboratory founded by the Italian Ministry of National Education.

Situated in a large room which was once an old monastic guest room, the laboratory plays a vital role, with its work based both on scientific research and its unique technical skills paired with refined craftsmanship.

One of its most noted accomplishments was the discovery of the 6th-7th century Homily of St. Ephrem of Syria, who died in 373 — found in a 17th-century volume from Italy’s Vallicelliana Library that the workshop was restoring.

Other accomplishments include the restoration of the 12th-century parchment manuscript of the Typikon from Càsole, which was in serious conditions following a fire; an Evangeliarium graecum from the Treasure of St. Mark from St. Mark Library in Venice, which had been badly damaged by mildew; and three 11th-12th century parchment scrolls of Exultet from the town of Troia in Puglia.

By far the most prestigious restoration work, however, is considered to be the over 1,000 papers from the Codex Atlanticus by Leonardo da Vinci, comprising his fanciful yet prescient drawings of machines, as well as his studies on geometry, calculations, and even his personal notes.

The priceless manuscript was in serious condition because after four centuries insects and moths had wrought great damage. Mold and oxidation had begun to grow on the surface of its pages.

The monastery’s expert restorers first unglue the papers, then undertook a major cleaning and restoration of the many wormholes in the parchment. The many tears and binding failures were also carefully mended.

Most of the monks who live at Grottaferrata have connections to tiny ethnic Greek or Albanian communities in southern Italy, which are amazingly still populated by descendants of early settlers from the East.

They are the very last monks of the Italo-Albanian tradition to follow the Rule of St. Basil.

Brother Filippo Pecoraro, 23, who was raised in an Italo-Albanian family in Sicily, is descended from the Arbereshe people, who fled the Ottoman invasions of the Balkans between the 14th and 18th centuries.

“I grew up in an environment very close to the Church and this life choice was inside me,” Pecoraro explained to interviewers.

However, the young age of some of the newer monks will not forestall the decline of the monastery unless it attracts more young men to its ranks, and soon. As lately as the 1950’s Grottaferrata was home to around 80 monks.

Nonetheless, Corsaro is steadfast in his belief that preserving the ancient tradition is his sacred calling, and he does not fear the future.

“I feel like someone the Lord has chosen among the few to continue this responsibility and I thank God for the grace he has given me to carry out this task,” he said.

During the millennium celebration of the Abbey, which took place from 2004-2005, an enormous exhibition showing the restoration work carried out by the monastery’s Ancient Book Laboratory, including their restored manuscripts, was opened to the public.

The monastery has a fascinating website, relating its history and describing its current work, and showing its beautiful mosaics of its church interiors, which can be explored by clicking here.