[ditty_news_ticker id="27897"] The Greek Orthodox Archdiocese: Its Past, Present, and Future - An Interview with Archimandrite Nathanael Symeonides 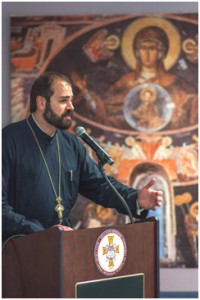 The Greek Orthodox Archdiocese: Its Past, Present, and Future – An Interview with Archimandrite Nathanael Symeonides

Religions for Peace USA regularly spotlights member communities to be featured in The Interfaith Observer. This month, Suzy Lamoreaux interviews Archimandrite Nathanael Symeonides of the Greek Orthodox Archdiocese, who represents the Archdiocese on RfPUSA’s Executive Council. The Archimandrite was appointed director of the Office of Inter-Orthodox, Ecumenical and Interfaith Relations in September 2013. Fr. Nathanael and his department work to spread interest in and knowledge of Church activities and teachings while “always respecting the sincerity of the religious convictions and spiritual sensitivities of others.”

The Archdiocese was in the news recently when Archbishop of America Demetrios walked alongside President Obama and thousands of others in Selma, Alabama to commemorate the 50th anniversary of the Selma-to-Montgomery march for civil rights. The church’s work on conflict resolution, humanitarian aid, and equality were the topics Fr. Nathanael was most eager to share with the interreligious community.

Suzy Lamoreaux: The Greek Orthodox Archdiocese has a history of condemning violence as a means of resolving conflict. How does the Archdiocese promote peaceful reconciliation between groups, especially between other religions as well as other Christian denominations?

Fr. Nathanael: In order to understand the Orthodox Christian view of war, one must understand the history of Church-State relations in the East. In the Eastern Roman Empire, that is, the Byzantine Empire, Church and State were always separate but equal entities. Therefore, the Church never declared war, promoted violence as a means of resolving conflict, or needed to develop a “just war theory.”

Simultaneously, however, the Church acknowledges that, due to the fallen nature of humanity, there are times when the State enters into violent conflict. What this leads to, therefore, is a Church that prays for and blesses soldiers who engage in conflict while never blessing the conflict itself. It is also important to note that even in those instances when violence is used as a means of defense, the Church always prescribes a period of repentance and spiritual healing for anyone who was forced to enact violence upon a fellow human being.

The Archdiocese promotes peaceful reconciliation between groups primarily through dialogue and collaborative efforts. On the one hand, we understand that any intrinsic problem must be surfaced through dialogue – in theological terms, confession. The exercise of recognizing those elements that keep us separated can indeed help lead us to reconciliation and forgiveness. On the other hand, engaging in collaborative projects not only helps us engage one another, but, during the reconciliation process, it can help us build stronger and broader communities. Both dialogue and praxis are equally important and must happen simultaneously.

Orthodox Christianity does not view itself as a Christian denomination, that is, Orthodoxy is not just one “version” or “brand” of Christianity. The Orthodox Church is a community of believers who gather together to form the Eucharistic community, which experiences and joins themselves to Christ in the same way as the early Apostles. While this Eucharistic community is always pointing to something beyond the world as its goal, it never rejects the world. Instead, it is called to pray for the salvation of the world. This, of course, includes all people, irrespective of their creed or lack thereof. Since conflict among people is often rooted in differences in identity, and since religious and faith convictions are a major part of identity, it is essential for people of faith and good will to identify those elements in their traditions that help forge positive relationships.”

Suzy: One means of resolving conflict is through humanitarianism. Given the Archdiocese’s large-scale influence, what is the organization currently doing to provide for those living in despair? Is there a particular area where the Church focuses more of its efforts?

Fr. Nathanael: The Orthodox Church initiates its humanitarian relief efforts through prayer to God, who is perceived as the greatest “philanthropist” and “humanitarian” for His limitless love for the world. As such, the Orthodox Church includes special petitions for those under persecution and distress in all of its services.

On a more practical level, the Archdiocese has on numerous occasions provided material and financial aid to countries and regions adversely affected by natural disasters, war, disease, and other sources of crisis. A few examples in recent history include the Archdiocesan relief efforts for the 2004 tsunami in Thailand and the current humanitarian crisis in Greece. Moreover, in collaboration with our associated agencies, the National Philoptochos Society and International Orthodox Christian Charities (IOCC), the Archdiocese supports on-the-ground efforts both nationally and internationally, including relief efforts in Syria, Jordan, and Palestine.

The Department of Inter-Orthodox, Ecumenical and Interfaith Relations has helped raise awareness around the Orthodox Church’s role in addressing such crises by hosting a colloquium on Orthodox Christianity and Humanitarianism. This initiative brought together scholars and practitioners – Orthodox and non-Orthodox alike – from around the world. The colloquium was held on the campus of Hellenic College and Holy Cross Greek Orthodox School of Theology, making it a teaching moment for future clergy, theologians, missionaries and relief workers. More information on that initiative can be found at: Humanitarianism.goarch.org.

Since all areas of humanitarian aid are crosscutting, it is difficult to pinpoint one specific area on which we focus our attention. However, it is common practice for us to build upon the initiatives of the Ecumenical Patriarchate, namely in the area of theprotection of the environment. Furthermore, in our work at the United Nations, we have taken a particular interest on the status of refugees and displaced persons, as well as on issues of poverty. As a person trained in bioethics and public health, I have a personal interest in issues of disease and health advocacy.

Suzy: Peace is achieved, in part, by acknowledging an individual’s humanity and by recognizing one other as equals. What does “equality” mean to the Greek Orthodox Church? How does the organization promote equality in its churches and in the international, interreligious community?

Fr. Nathanael: The Orthodox Church maintains a set of theological principles that influence its approach to equality. According to these tenets of faith, equality is primarily viewed under the prism of the “image of God,” according to which humanity is created. The Church believes that as images of God, each person must be treated with the same dignity and respect, irrespective of his or her age, gender, sex, race, creed or any other factor that distinguishes one from the other. As images of God, people are also endowed with the gift of free will, which means that each of us has the ability to express ourselves without fear of harm or reproach.

Historically speaking, the late Archbishop Iakovos was very involved in the civil rights movement of the 20th century. Fifty years ago, he marched with the Rev. Dr. Martin Luther King, Jr. in Selma and was one of the leading voices advocating for passage of the Voting Rights Act. More information about the Orthodox Church’s involvement in the Civil Rights Movement can be found at: CivilRights.goarch.org.

Today the Archdiocese promotes equality internationally through its efforts as a civil society organization at the United Nations. One example is our recent statement on the Protection of Women and Girls to the Commission on the Status of Women.”

Suzy: The Greek Orthodox Archdiocese of America has a rich and compelling history. What is in store for its future? Are there any programs or initiatives you are particularly excited about?

Fr. Nathanael: As a Non-Governmental Organization in General Consultative Status with the Economic and Social Council of the United Nations, the Archdiocese has been actively engaged in the intergovernmental negotiations for the Post-2015 Development Agenda. In particular, the Archdiocese advocates for a strong foundation in human rights mechanisms, the need for essential services to remain in the public sector, and the explicit naming of the Human Right to Water and Sanitation in the political declaration of the agenda. Unfortunately, we are sad to say that the human rights of all have been marginalized and water is presented as a mere commodity in the first draft of the Post-2015 Development Agenda. As negotiations on the document continue, we, in solidarity with our partners, will continue to advocate for the centrality of human rights, particularly water and sanitation.

Just as the Archdiocese has committed itself to the realization of the Millennium Development Goals, we intend to continue working for the realization of the Sustainable Development Goals. While we wait for the finalization of the Post-2015 Development Agenda, Transforming our World by 2030: A New Agenda for Global Action by heads of state this September, we seek new opportunities to participate in its implementation. One program we are excited to announce is a fellowship program that will help train and empower future advocates through our work at the United Nations during this critical time.”