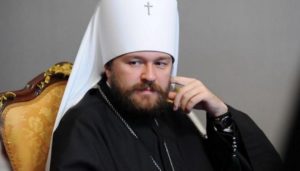 The three-way dispute between Ukrainians, Russians, and the Ecumenical Patriarchate over the possibility of Ukrainian ecclesiastical independence is shaping up to be the greatest challenge to Orthodox Christian unity of our generation. From a purely political perspective, Ukrainian autocephaly would represent an unmitigated disaster for the Russian Orthodox Church. Not only would it deprive the Russian Church of one third of its parishes and undermine its Russkiy Mir project, but it would dramatically belie the claim of the Moscow Patriarchate that it is the leader of the Orthodox Christian world.

In a desperate effort to thwart the independence movement, the Moscow Patriarchate and its surrogates are pushing a host of rhetorical and historical arguments but none is more belligerent or ridiculous than the accusation that the Ecumenical Patriarchate has succumbed to the “heresy of papism.” While this is not the first time that the charge of “papism” has been leveled in an inner-Orthodox dispute, the uncritical consumption of this charge reveals both a broad theological illiteracy and the potency of anti-Catholic rhetorical smears within inner-Orthodox polemic.

Even a cursory understanding of Orthodox Christian history or canon law reveals that there is nothing inherently heretical about the papacy. Many saints of the Byzantine era, including John Chrysostom and Theodore the Studite, recognized the administrative seniority of the bishop of Rome and appealed to the super-jurisdictional authority of the popes of their day. The fathers of the Fourth Ecumenical Council even affirmed the legendary connection between St. Peter and the papacy.

But more importantly, heresy is a specific and technical theological term that refers to a deliberate break from the Church’s dogmatic (i.e. creedal) belief in Christ and the Trinity. Disputes over practice or administrative organization might indicate a break from tradition or canonical order but they do not constitute heresy. St. Basil famously explained this distinction in a letter to Amphilokios in the fourth century.

Because the question of Ukrainian independence has nothing to do with the dogma of the Church, the category of heresy is not applicable.

Indeed, the Ukrainian “question” is a dispute about jurisdictional authority, the boundaries of independent churches, and who gets to decide when a local church is granted autocephalous status. As I’ve argued elsewhere, these kinds of disputes go back to the late-ancient world and largely mirror broader geopolitical transformations.

It is, of course, difficult to know if the perpetuators of this slander are theologically obtuse or willfully malicious. And while we have come to expect this kind of behavior in the dark corners of the Internet, it is unsettling to see it actively promoted by the Department of External Church Relations of the Moscow Patriarchate. But that is precisely what is happening. In an interview posted on the Moscow Patriarchate’s official website last week, Metropolitan Hilarion Alfeyev declared that Patriarch Bartholomew “is taking the decision unilaterally, which contradicts the multi-age tradition of the Church, which is nothing else but the heresy of papism.”

In all of this, perhaps, we should not lose sight of the difference between the millennium-long Orthodox critique of an expansion of papal supremacy that began in the Middle Ages and the rather recent appropriation of the phrase “heresy of papism” as an inner-Orthodox accusation, which is designed to delegitimate the authority of an Orthodox bishop.

The expression “heresy of papism” was first employed by the Old Calendarist schismatics in the middle of the twentieth century as part of a failed propaganda effort to justify their break from the canonical Church. For the Old Calendarists and their sympathizers, the “heresy of papism” was not a critique of specific papal teaching but, rather, a catch-all slander that encompassed everything that they perceived to be wrong with Western Christianity and modernity. Of course, the real target of the Old Calendarists was not the Roman Catholic Church or the bishop of Rome but Orthodox bishops—especially Ecumenical Patriarch Athenagoras—who they believed had capitulated to the ways of the “West.”

Perhaps it is telling that Metropolitan Hilarion has been reduced to employing the rhetorical tactics of a highly sectarian and schismatic community from the last century as he grasps for arguments to prevent something that appears unstoppable at this point. Let us pray that he and others in the Moscow Patriarchate know better than the Old Calendarists that exaggerated rhetorical slanders do nothing to legitimize a self-imposed schism.