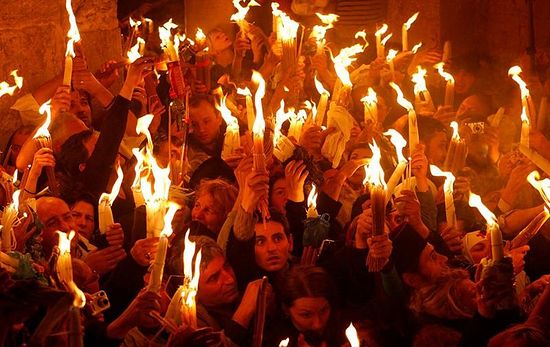 Jerusalem, April 19, 2014 – The Holy Fire has descended on Holy Saturday in the Church of the Lord’s Sepulcher in Jerusalem.

His Holiness Patriarch Theophilos III of Jerusalem has passed on the Holy flame to the tens of thousands of pilgrims gathered in the church. Among them were representatives of the St. Andrew the First-Called foundation, who will bring the Holy Fire from Jerusalem to Moscow by airplane, reports RIA Novosti.

The time it takes for the Holy Fire to descend from the moment the Patriarch enters the Holy Sepulcher can vary from year to year. In recent years, it has taken no more than a half hour. This year, the faithful had to wait no longer than ten minutes.

The Holy Fire descended, as in previous years, into the chapel located within the church of the Lord’s Sepulcher, over the bed of stone upon which the interred body of Christ lay on Holy Saturday. This is where for many centuries the Orthodox Patriarch has prayed on this day before Pascha for the descent of the Holy Fire.
In accordance with an ancient ceremony, the Patriarch’s clothing and the chapel itself is scrupulously checked, to ensure that there is so substance or item present that could artificially strike a flame.

For a number of years now, the St. Andrew the First-Called Foundation has been bringing the Holy Fire from Jerusalem to Moscow in a transportable lamp. The fire is then spread to cities all over Russia. This year there will be an especially festive celebration in the Crimea with the advent of the Holy Fire.