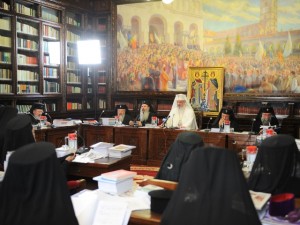 Holy Synod of Church of Romania in session

The working session of the Holy Synod of the Romanian Orthodox Church was held in the Synodal Hall of the Patriarchal Residence, under the chairmanship of His Beatitude Patriarch Daniel during the last week of October 2013.
We mention some of the decisions adopted:

PRESS OFFICE OF THE ROMANIAN PATRIARCHATE