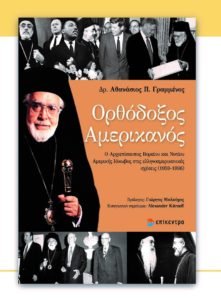 ATHENS – Hellenism outside the borders of Greece has shown remarkable interest in metropolitan issues and its contributions are indisputable. The late Archbishop Iakovos is an emblematic figure of the Diaspora, who left his mark on an entire era for the Greek community in America.

Dr. Athanasios Grammenos spoke with the National Herald about his new book, Orthodoxos Amerikanos (Orthodox American) about the late Archbishop Iakovos and the relations between Greece and the United States in the years 1959-1996. Grammenos began writing a book, he told TNH, about the politics and influences of the Greek-American community in the foreign policy of Greece, and stumbled upon the rich archive of the Archbishop of Northern and South America who for 40 years served the Orthodox Church on the American continent. So that was enough for him. Who else, moreover, spoke and corresponded with the Presidents?

As he researched, Grammenos discovered the man, the hierarch, the nationalist, and ended up writing a book about the personality that managed to show America’s Hellenism as one of the most important nationalities in the United States.

When asked what he learned about Iakovos, the hierarch and man, in examining his rich archives, Grammenos pointed out that “we first gained experience and knowledge of the context in which the Church operates and, by extension, the reflection of the Greek community of America. And in the scientific field we have verified Diaspora theories. That is, the communities still have the same interest in national issues, but at the same time express it in a slightly more inflexible way. That’s because they speak from America, a strong country, and they can support the most maximalist positions. So, I believe that this book also teaches us the sociology of the Greeks of America. As for Iakovos, he always carried Imbros in his heart. He was a man who was persecuted because he was a Greek.

“Iakovos and a whole generation experienced ethnic inequality. And, apart from his Orthodox philosophy, equality was also a personal experience so he believed he should do everything he could to improve human rights.”

That is why he responded to the Rev. Dr. Martin Luther King Jr.’s invitation to support the African-American fight for civil rights and walked alongside him in the march on Selma, ignoring the dangers of racist violence.

At the book presentation in Athens, a discussion took place with panelists Assistant Professor of Political Science Ekavi Athanassopoulou, Panayiotis Gennimatas- emeritus Vice-President of the European Investment Bank, Oxford University Professor Artemis Papatheodorou, and journalist Georgios Malouchos, who had done a series of interviews with the late Iakovos for radio Skai which were later published in a book.

Indeed, Mr. Malouchos, the only one of the panelists who had met and known the archbishop well, said that Iakovos believed very much in God, but he was a nationalist in vestments. He lived and breathed for Greece and the U.S. and was always struggling for good bilateral relations.

“And it was one of the greatest forms of contemporary Hellenism,” Malouchos said.

Iakovos worked on many initiatives to support Greece from the United States, especially after the Turkish invasion of Cyprus, and was one of the founders of the Greek-American lobby, contributing to maintaining good bilateral relations, even in times of crisis. The recognition of his contributions by the political world of America made him an interlocutor of U.S. Presidents, as well as of the Prime Ministers of Greece, who often asked for his advice.

The book examines the above issues critically, but is not a biography. It is more a thorough analysis of Archbishop Iakovos’ multidimensional political work on human rights, respect for the rule of law and relations between the Diaspora and the homeland in the light of the study of International Relations.

Athanasios Grammenos was born in Athens in 1980. He graduated from the Department of Political Science and History of the Panteion University, completed postgraduate studies in Diplomacy at the Reading University’s Graduate Institute of Political and International Studies and received his PhD from the Department of Balkan, Slavic and Eastern Studies at the University of Macedonia. He has been honored with the NATO scholarship by the Foreign Ministry. He is a partner of the Friedrich-Naumann-Stiftung fur die Freiheit Foundation with responsibility for the development and implementation of political education programs.