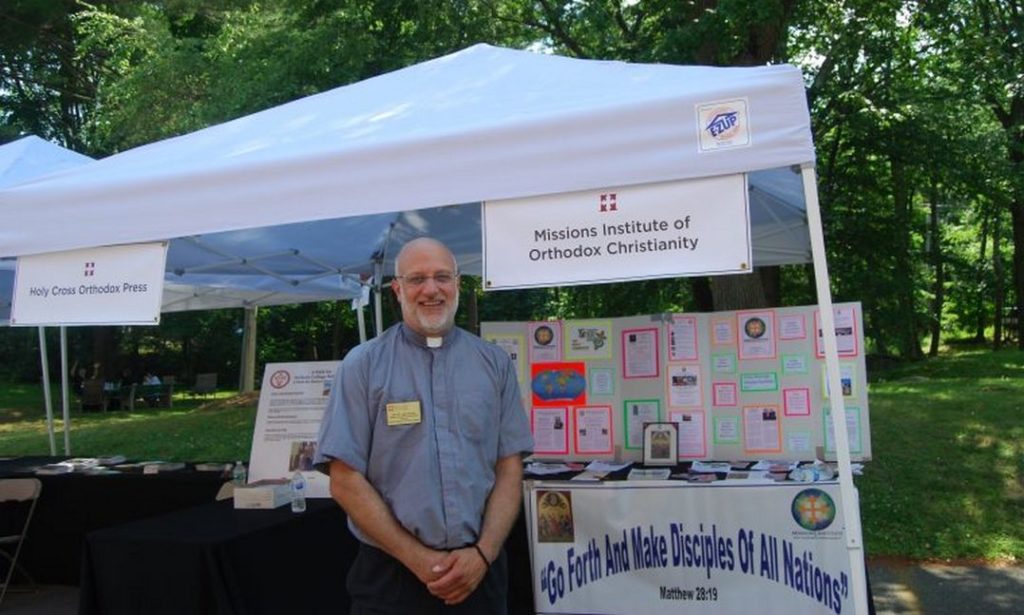 BOSTON – The Missions Institute of Orthodox Christianity has been established since 2010 at Hellenic College and Holy Cross Greek Orthodox School of Theology in Brookline, MA, directed by Fr. Luke Veronis, who also teaches classes on missions. He is also presiding priest at Sts. Constantine and Helen parish in Webster Massachusetts.

Fr. Luke has served as a missionary in Kenya, preaching the Gospel of Christ and baptizing hundreds into the Orthodox Church. He also served for twelve-and-one-half years with Archbishop Anastasios of Tirana and All Albania.

During the Clergy-Laity Congress of the Archdiocese in Boston last July Fr. Luke had a stand at the theological school informing the delegates about the Missions Institute and about the serious and sacred ministry of missions.

Fr. Luke’s father, Fr. Alexander Veronis, was a priest for many years at the Annunciation parish in Lancaster Pennsylvania and he contributed much to the missions ministry of the Church. Fr. Luke follows in his footsteps.

Speaking to The National Herald Fr. Luke said “we started the Missions Institute here at the School in 2010. It is an institution of the School that tries to help the students understand the role of missions, outreach, and evangelism of our Church.”

He said he was attracted to the missions ministry because, “I think it is a part of learning our faith, a part of the Gospel you have to go out and share and the good news with other people to reach out. Archbishop Anastasios of Albania, my father, other people involved in missions open my eyes to the importance of missions.”

Fr. Luke has done extensive missionary work locally and abroad. He said, “I spent one year with Archbishop Anastasios in Kenya and then ten-and-a-half years in Albania; he has been the Archbishop of Albania for 25 years. Archbishop Anastasios is a holy man who has shown how to live the life of Christ in Africa, in Kenya, in Albania, in the most difficult places of the World. He has offered a witness of love and light to the World.”

Fr. Luke, a professor of missions at the School of Theology, said that “I teach our students our faith, to reach out, to share the treasure of our faith with the world around us locally and globally…we have to reach the unchurched where they are, show them the love of God and invite them to come to the Church.”

Asked if we need an internal mission in the Church, he said “mission is reaching out locally, nationally and globally…it’s all the same, so it is not one or the other. We need reaching out to our own people as well as reaching out to all our coworkers who are not connected with any church and invite them to come in as well, to come and see.”

Fr. Luke A. Veronis and his wife Presbytera Faith have served Sts. Constantine and Helen Church since December 2004. They have witnessed a wonderful turnaround of the parish, which has grown from 90 families in 2005 to 180 families.

He is an adjunct Instructor at both Holy Cross and Hellenic College. He taught from 2005-2008 at St. Vladimir’s Orthodox Theological Seminary and has guest lectured at St. Herman’s Seminary in Kodiak, Alaska. He serves on the Board of Directors for the Orthodox Christian Mission Center (OCMC) in St. Augustine, FL, and the Overseas Ministries Study Center (OMSC) in New Haven, CT.

Fr. Luke has been involved in the Orthodox Church’s missionary movement since 1987. Since 2010 has taught a summer class titled “The Missiology of Archbishop Anastasios (Yannoulatos) of Albania,” where he takes 12 students each year from various Orthodox theological schools or seminaries to Albania for two weeks. He has led four short-term mission teams from Sts. Constantine and Helen Church to work with Project Mexico, building homes for the desperately poor in Tijuana, Mexico.

Fr. Luke and Presbytera Faith have been married since 1994, and have four children – Paul, Theodora, Panayiota and Nicholas.