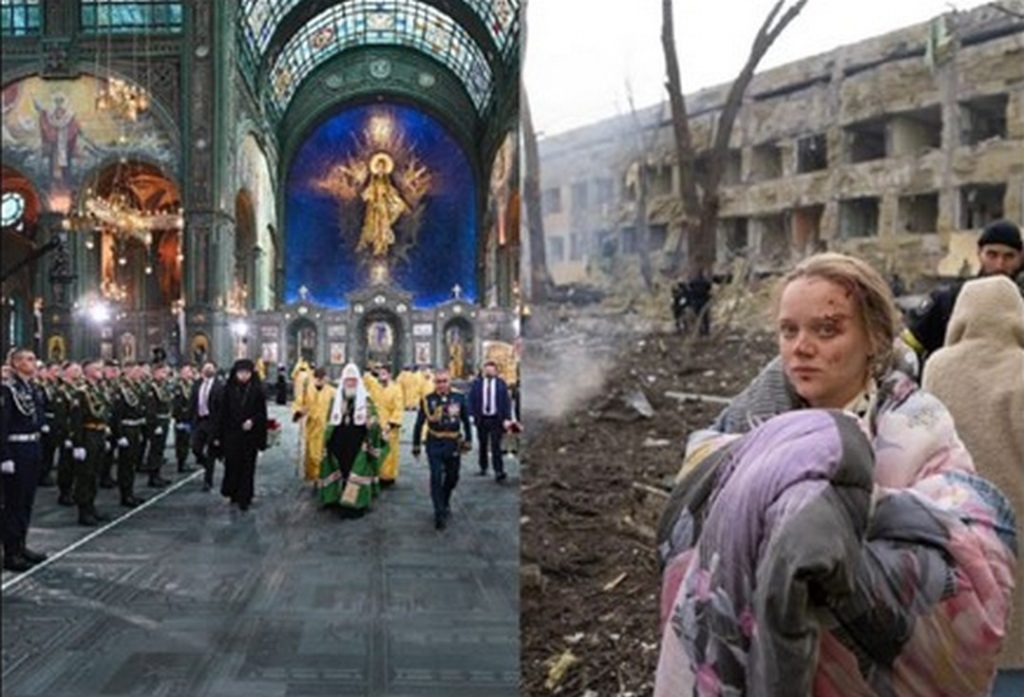 In Mariupol, Russian rockets destroy a maternity ward, wounding dozens. Meanwhile, in Moscow, Patriarch Kirill (Gundiaev) blesses the Russian troops. In the same town of Mariupol, Russian bombs kill hundreds of children and elderly in the Drama Theater. Putin’s Patriarch has the gall to describe the war as a “metaphysical struggle” against Western values. A Russian missile destroys a building in Odessa, burying a mother with her three-month-old infant alive. Obedient to his master in the Kremlin, Gundiaev justifies the war as an act of self-defense.

Many western observers are puzzled. Aren’t the troops blessed by the Russian Orthodox Church presently slaughtering fellow-Orthodox civilians in Ukraine? Aren’t the Russian missiles destroying the Orthodox churches and monasteries, along with the schools, hospitals, and train stations, of the fellow-Orthodox in Ukraine? If all of this is true, how can Patriarch Kirill be sending the Russian troops into battle with his blessing? Isn’t this war precisely “fratricidal,” as Metropolitan Onufriy (Ukrainian Orthodox Church – Moscow Patriarchate) called it, in a moment of recently found clarity? It did not previously dawn on Metropolitan Onufriy that Russia’s invasion of Eastern Ukraine in 2014 was also an act of fratricide. Meanwhile, several senior bishops within Onufriy’s jurisdiction continue to promote blind submission to Patriarch Kirill, who rationalizes and justifies the killing of the members of their flock in Ukraine—the bombings and the shelling, the slaughter of children and civilians, and the displacement of millions—as Russia’s act of self-preservation. Have Onufriy’s bishops lost their minds or consciences? Is this foolishness or treason? Whatever the answer, the outcome is the same: complicity in acts of violence on a scale unseen in Europe since WWII.

The Second World War was an act of madness and a miserable failure. Hitler’s maniac lust for power found an outlet in pernicious ideology. The ideology of the Nazi Party came to blind him to such an extent that no violence seemed unjustified in his project of colonizing Eastern Europe’s “bloodlands,” which included Poland and Ukraine. The ideology presented the Aryans as superior to other nations and denied the right of existence to some groups of people, such as the Jews. Hitler had his “minister of propaganda,” Goebbels. Putin has his obsequious ideologue, Gundiaev. Putin’s lust for power found a conduit in the ideology of the Russian World (Russkii Mir). When weaponized, this ideology teaches the superiority of Russians over other Slavs and denies to Ukrainians the right to exist as an independent nation. Russkii Mir is an aggressive form of Eurasianism, which in turn is a bastard child of the nineteenth-century Slavophile movement. The Slavophiles, of course, could not have imagined “nuclear Orthodoxy” in their worst nightmares. Still, the Romanticized Orthodoxy of the Slavophiles—with its patina of benign colonialism—has been turned into the bloody dystopia of the Russian World in Putin’s attempt at grasping after the phantom of the Russian Empire.

In the Soviet Union, May the 9th was turned into a national holiday known as “Victory Day,” celebrating the end of WWII. This year, Putin was hoping to celebrate a sham victory of the Russian Army in the conquest of Ukraine. He miscalculated. Miserably. Instead of an easy victory, what awaited him in Ukraine was fierce resistance and ultimately, defeat. Putin and his cronies have already lost morally. The world shudders at the Russian actions in Ukraine and sees them for what they are: a horrific act of military aggression and a human-made catastrophe of enormous proportions. Putin’s rhetoric suggests that in his head at least, he is playing out scenarios of WWIII of Russia against the West. Whether he tones down his rhetoric or not, his proposition is utterly bankrupt morally.

In addition to its moral downfall, Russia will continue to lose politically. Unlike the Cold War period, when the Soviet Union exerted considerable ideological influence on the socialist countries, at present the price of political cooperation with Russia, even for countries that historically would have been inclined to cooperate, will be too high.

The same applies to the cost of economic cooperation. Russian companies are already trying to avoid sanctions. When things get more desperate, sanctions avoidance will become its own branch of the Russian economy. While smaller companies might be able to broker shady deals with non-western partners, for larger companies any maneuvers violating international laws will become cost-prohibitive. Russia is already losing this war economically and will continue to do so, when the full extent of sanctions kicks in. Long-term, the Russian economy will stagnate, a population that has now tasted a lifestyle more comfortable than the dreariness of the Soviet time will be impoverished, and Russia will be significantly weaker. Before sanctions, Russia’s economy was smaller than that of Italy. If Russian gas and oil exports are reduced, the country’s economy will continue to shrink. It is this gradual shrinkage, this economic pain, not moral or political transformation, that will be the main factor in Russia’s change of course. It is simply naïve—as some western pundits and academics do—to expect the population, which expressed its overwhelming support for the annexation of Crimea and the majority of which continues to support the present-day war, to change its political course overnight. To be sure, the conditions for a different political reality will need to be created. However, the main factor will remain economic, as it was also during the collapse of the Soviet Union.

The longer the Russian economy is left to stagnate, the weaker it becomes, and the easier it will be for the West to eventually negotiate (read: “force”) Russia’s de-militarization, which will have to include nuclear weapons. Similar to Germany after WWII, the international community cannot afford to live with a threat of a nuclear Russia. Only having addressed Russia’s nuclear capabilities can the West allow Russia to begin its process of economic recovery. Before any of this becomes possible, both Putin and Kirill will need to be removed from power. In Kirill’s case, this removal should be undertaken by an international body of Orthodox Christians representing the family of the Orthodox Churches. The leaders of the Orthodox Church need to assure their faithful and the rest of the world that the ideology of the Russian World and the views of its main spokesman, Kirill Gundiaev, are incompatible with the Orthodox faith. There have been several primates in the history of the Orthodox Church who were either anathematized or removed from their offices or sent into exile. Whether Patriarch Kirill is not only a war criminal but also a heretic should be left for the canon lawyers to decide. One thing is clear: if Putin lives long enough to be summoned to Nuremberg-2, he needs to be accompanied to this trial by his “minister of propaganda,” Gundiaev. Russia’s moral, political, economic, and spiritual defeat in this war will be complete only when both heads of the double-headed eagle are locked up in prison for the remainder of their days.

That Russia will be defeated is inevitable. The only question is how much suffering will the Ukrainian people be put through before this day arrives?