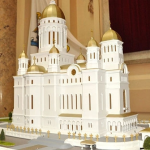 The National Cathedral of Redemption

As municipal leaders in Romania are up for election on June 10th they are receiving help from an unexpected place. In the run-up to the poll preaching not only the word of God but also the one of local politicians has become a custom in several churches in Romania. Romanian media recently revealed that in some churches in Bucharest and other cities around the country, churchgoers found campaign leaflets next to candles and incense envelopes.

Clerics are not making a secret of their political activities. During a recent official visit to Iasi, the biggest city in the north-east part of the country, Victor Ponta, the prime minister, was told by a senior official cleric based there that “they are working so that the mayor could get re-elected with a majority of votes”.

The Orthodox Church, the biggest religious institution in Romania, is getting public funding even though Romania doesn’t have an official state religion. “The National Cathedral of Redemption”, a gigantic luxurious church, is currently being built in Bucharest at a cost initially evaluated by the Church itself at €400m ($503m). Besides that, the government has donated 11 hectares of land for the project worth around €200m.

Construction started in 2010 and sparked controversy in impoverished Romania, a country where thousands of people took to the streets at the beginning of the year to protest against the government’s austerity measures, lack of jobs and poor living standards. It is also the country where last year half of the hospitals were closed or merged leaving thousands of people, especially from the countryside, without a hospital nearby.

The cathedral, built right next to Nicolae Ceausescu’s Palace of the People, will be 125 metres high and could become the tallest Orthodox church in the world. With space for up to 5,000 people at a time, it is meant to symbolise Romania’s spiritual unity and national dignity.

Faced with public pressure, the heads of the Church denied the initial cost estimate and said the construction would amount to just €100m. They said the money would be raised from donations but the actual fund-raising process remains a mystery.

So far, the government and some of the city halls in Bucharest have donated more than €10m to the project from the public purse but the Church keeps asking for more money every once in a while, local officials said.

Some politicians are very eager to help. The National Agency Against Corruption revealed a phone conversation between Patriarch Daniel, the head of the Romanian Orthodox Church, and Viorel Hrebenciuc, a well-known Social Democrat MP. According to the transcript, the politician told the Church leader that he can help him get a loan for the construction of the cathedral from Banco Espirito Santo, the “Holy Spirit” Bank, in Portugal. The case is under investigation.

So why are some politicians supporting the Church? The Orthodox Church is the most trusted institution in Romania, according to official polls. The Church claims to have around 18m followers in Romania, which ccounts for over 80% of the total population.

The Orthodox Church has refused to offer The Economist’s correspondent in Bucharest an explanation. Clerics avoid talking about the Church’s sources of finance and about its fortune. Yet judging by the luxurious cars the Church leaders were seen in at some public events, one might conclude that their finances are not too bad at all.

In Christian belief, at the end of all time Judgment Day will hold each person accountable for the way they behaved during their life. The local election day on Sunday will not mark the end of the world, but it could be a great time for voters to judge local politicians.