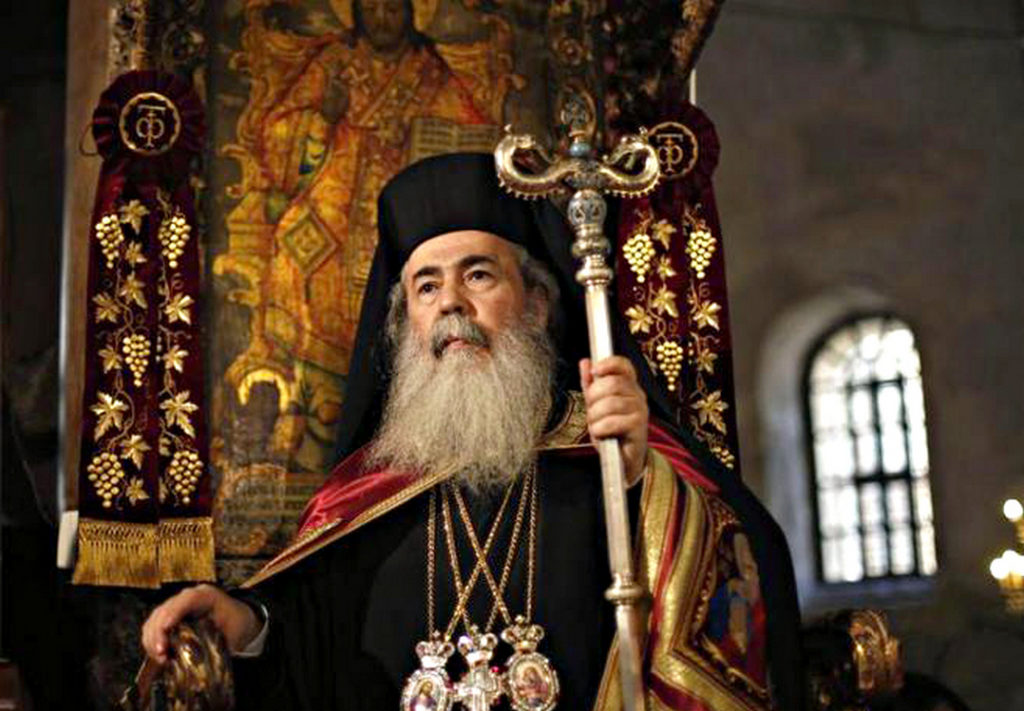 The publication Orthodoxos Typos1 confirmed the fact stated in our headline: There are also primates of Local Churches who will not follow the example of the Archbishop of Athens Ieronymos. One of them has already made this information public, and they became known, despite the fact that our newspaper did not disclose names; we wanted the initiative of the Patriarch of Jerusalem Theophilos, (who convened the Primates of all the Local Churches to a meeting in Amman, Jordan to discuss the urgent issue of the unity of the Church), to be kept secret, as to not to lose the element of surprise.

Some were frightened by the mere thought that the Phanar’s ideas could be shaken, and they embarked on various intrigues in order to prevent any possibility for convening a council or inviting the primates of the Local Churches to it. But such a position essentially implies that all other primates, besides the Ecumenical Patriarch, are forbidden to even simply express their opinion!

The first who decided to get ahead of everyone and prevent a constructive solution to the Ukrainian question was the Archbishop of Athens Ieronymos, who on November 22, 2019, made a statement for the orthodoxia.info portal:

The true reason for the refusal, of course, was a different story: Shortly before that, the Archbishop of Athens communicated (first by telephone, and then at another personal meeting) with the U.S. Ambassador Geoffrey Pyatt, who after the visit, did not hide the fact that they had jointly discussed the Ukrainian issue. It is in this context, that one should look for the causes of certain actions of the Primate of the Church of Greece.

As for the ecclesiological side of the issue, according to the statements of the Archbishop of Athens, there are “two categories” of Primates of Churches: The Patriarch of Constantinople, towering above everyone else, and the other Primates, who are responsible for only one Local Church and no more! Is it really so?

One Archbishop of Athens completely disagrees with another!

The author of many works, a Professor of Theology, and later, the Archbishop of Athens, Chrysostomos (Papadopoulos), in his work “The Church of Jerusalem” writes:

Whenever the Church felt the need to confront heretics, the Patriarchs of Jerusalem—either chairing the Holy Synod or personally—convened Church Councils. When in the seventeenth century, the whole East and West were confused by the teachings of the Patriarch of Constantinople Cyril Lucaris, four Patriarchs of Jerusalem: Theophanes, Paisios, Nectarios, and Dositheus, took an active part in the urgent convocation of a Council, which then defended the Holy Orthodox Church…

Consequently, the current actions of the Jerusalem Patriarch Theophilus, mandated by a sense of responsibility for the Church, from the canonical point of view, corresponds to our historical heritage.

The Council, which was held in Iași in 1642 under the chairmanship of the Patriarch of Jerusalem Theophanes, having proved the fallacy of the Confession of Faith of Patriarch Cyril Lukaris, condemned and anathematized this document, but at the same time acquitted Patriarch Cyrill2…

However, the controversy surrounding the name of Cyril Lukaris did not end there, and only 30 years later, the great Patriarch Dositheus convened the Council in Jerusalem in 1672.

The Patriarch of Jerusalem convened a Pan-Orthodox Council in 1672

The urgent issue that is today occupying the public debate, is whether the Primate of the Church of Jerusalem has the right to convene [a council of]the Primates of all the other Local Churches. As history tells us, the Patriarch of Jerusalem can call not only the Primates of the Churches, but also a Pan-Orthodox Council, with a large number of participants, to discuss the most important topics and issues of the Faith (just like any other Primate, and without him, any Bishop):

It so happened that at that time, in the whole Orthodox Church, only Dositheus, the Patriarch of Jerusalem, a great father of our Church, clearly understood the significance of those questions concerning which the Orthodox Church had to give an official answer…In connection, Dositheus decided to convene in March of 1672, the Council in Jerusalem. Markos Renierēs notes that this Council was ‘a most magnificent sight, because many clergy (71 participants), among whom were Patriarchs, Bishops, and other representatives of the clergy of the Eastern Church, arrived in Jerusalem—in the place sanctified by the Crucifixion of our Lord Jesus Christ.’ The Council was chaired by the Patriarch of this Holy City—the outstanding father of the Church—Dositheus…

Despite all the difficulties of that time, everyone who could, came to the Council, and the number of participants reached around 70 people. Against this background is juxtaposed the complete failure of the “Council of Zizioulas”3, which took place in Kolymvari, Crete, where, despite modern means of transportation and convenience provided along the way, only twice as many bishops would gather.

For Greece and for Orthodoxy!

The initiative of the Patriarch of Jerusalem is crucial for the entire Church as a whole, and Greece in particular. Similar in strength only to one who is unwaveringly devoted to the Orthodox faith, if the Patriarch of Jerusalem firmly and spotlessly takes this mission upon himself, realizing the great danger in which Orthodoxy is now—the danger of a frozen schism for many years—then it will be he who will go down in history, and not the Phanar’s false autocephaly, which, as Patriarch Bartholomew unsuccessfully joked, was received for a “bribe of sweets”…

France, through its representative Olivier Noandel, supported the Council of the Eastern Church in every possible way and helped Greece erect a final bastion to defend its Faith…

According to the sources of the Latins, Pat. Dositheus not only had the opportunity to expose the Protestant errors but also on behalf of the entire Orthodox Church, to present the doctrine of the Orthodox faith… Thus, it is difficult to overestimate the great significance of that Council; and its Oros became one of the doctrinal documents of the Orthodox Church, which became famous under the name, the Confession of Dositheus.

The Patriarch of Jerusalem is also Ecumenical!

The spiritual power of the “Mother of Churches” and its struggle for the True Faith essentially made the Patriarchs of Jerusalem “Ecumenical”, since it is not the title that gives its owner certain qualities, but the actions of the latter which have great meaning.

One is [worthy of the title]“Ecumenical”, when he acts in accordance with the teachings and life of the Fathers and Ecumenical Teachers of the Church, and stand with them in the same row, shoulder to shoulder:

Thus, the Church of Jerusalem, in the person of its patriarchs, has always defended Orthodoxy, and the great Jerusalem Patriarchs were champions of the common interests of the entire Orthodox Church… No matter where the ever-memorable Jerusalem Patriarchs went, they were never satisfied with only caring for their own Church, but they took care of all Churches. Therefore, the Patriarchs were not only in Constantinople, and Moldova and Wallachia, and in all our other countries, but also in Iberia,4 and in Russia, where they also came many times as representatives.

Is Kiev in the jurisdiction of the Patriarch of Jerusalem?

The Phanar claims that Kiev is subordinate to them, referring only to one single document. However, history proves the opposite:

On the path, while in Kiev, the Patriarch of Jerusalem [helped St. Peter Mogila—Trans.]found a large theological school there, conducted restorations, and ordained5 the Metropolitan of Kiev, St. Peter Mogila6 and other bishops in Little Russia, thereby defending Orthodoxy; and he performed many other acts in support of the Orthodox faith.

The Phanar is indebted to the Jerusalem Patriarch

The Patriarch of Jerusalem even provided protection to the Patriarch of Constantinople—this confirms and demonstrates exactly which Church is the “Mother of Churches”:

The Center of all Orthodoxy

Undoubtedly, the concept of a “Center” [of the entire Church]does not exist [in Orthodoxy]. And in any case, the right to be the “Center” does not belong to someone who touts his pseudo-privileges, as the “Eastern Pope” does now, but this instead belongs to the one who truly stands guard for Orthodoxy:

“In this way, the special battle for Orthodoxy has not yet been completed, but it continues and should be waged in the future with even greater courage, with the involvement of new and stronger forces from the Brotherhood of the Holy Sepulcher, as a result of which the Church of Jerusalem can again become the outstanding and glorious center of all Orthodoxy, as it has been over the past four centuries, despite the completely unfavorable, difficult conditions of its historical existence.”

The Immediate Convocation of the Pan-Orthodox Council

Since the Ukrainian problem arose, many voices independently from each other, and yet with once voice, proposed convening a Pan-Orthodox Council to resolve it. But since the Patriarch of Constantinople wanted to take revenge on Russia who did not take part in the “Council of Zizioulas” on Crete, he vetoed and rejected Pan-Orthodox discussion.

He does not agree with this proposal today, because he believes that the whole Church belongs to him alone. Recall that a couple of years ago, speaking in the Phanar at a meeting on the eve of the ecclesiastical new year, he said that even Qatar is within the canonical jurisdiction of the Patriarchate of Constantinople!

The Patriarch of Constantinople should not show ingratitude, but should indeed acknowledge everything that was done by the Patriarch of Jerusalem, and seek his consent; otherwise, the situation will continue to develop into something more and more harmful and destructive for the Phanar.

It is also the only opportunity for an assembly of the entire Church to take place—the only chance to find a way out of this situation. If the Patriarch of Jerusalem once before convened a Pan-Orthodox Council on a dogmatic issue, then it’s all the more possible today, when the issue is related to jurisdiction, and no one has the right to prevent its resolution under the pretext of non-existent privileges. It is not appropriate for men of the Church to hide behind any excuses; they must either resign because they are not fulfilling their sacred duty to God, or openly admit that to them, only the instructions and “commandments” which come from the USA have authority.

Panayiotis Katramados
Russian translation by the brothers of the Kellia of St. Modestos, Mt. Athos
Translation from the Russian by Matfey Shaheen

2 Patriarch Cyril declared at the Council that he was not the author of this treatise, published in 1629 in Latin in Geneva—Trans.

3 Metropolitan John Zizioulas is a very influential hierarch of the Patriarchate of Constantinople, who was involved in the planning of the Council of Crete.

6 St. Peter Mohyla (Mogila/Movila) was ordained as Metropolitan of Kiev and Galicia in Lviv, on Saint Thomas Week, then April 28, 1633, by the Bishop of Lviv Ieremia (Tyssarovsky), acting as Exarch of the Ecumenical Throne. From that moment onward, the Holy Hierarch Peter held the throne of Kiev, Galicia, and All Rus’. The Patriarch of Jerusalem gave him his blessing and support on many of his endeavors which he undertook to defend Orthodoxy, such as the printing of St. Peter’s famous “Orthodox Confession”. St. Peter also established the world’s first Orthodox seminary in the form of the Kiev Mohyla Academy—Trans.