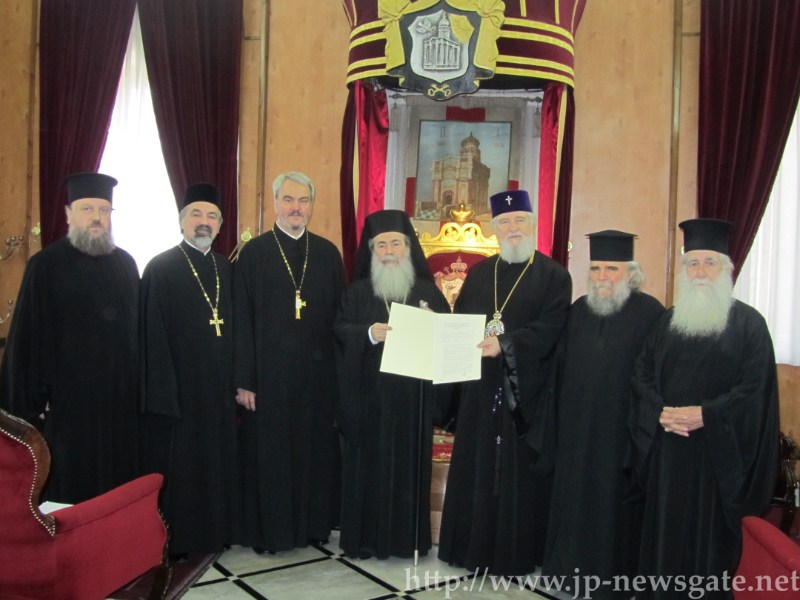 His Beatitude and the Metropolitan of Targoviste holding the signed agreement

The aforementioned agreement was prepared during the year 2013 over meetings between delegations of the two Patriarchates in Jerusalem, upon the peacemaking mediation of the Ecumenical Patriarchate.

For the completion of the said agreement, His Beatitude Theophilos, Patriarch of Jerusalem, received from Romania the Most Reverend Niphon, Metropolitan of Targoviste and Patriarchal Exarch; the Reverend f. Ionitsa Viorel, Professor and Protopresbyter; the Reverend f. Michael Titsa and the new Representative of the Patriarchate of Romania to Jerusalem, Archimandrite Timotheos. With them they brought the said agreement, signed by His Beatitude Daniel, Patriarch of Romania, on Sunday, 29th of January/2nd of February 2014.

The main points of this agreement (see link: http://www.jp-newsgate.net/en/2013/02/21/2339 ) have now been sealed by means of the understanding between the Heads of the two Churches that “the Church and its guesthouse in Jericho shall operate not as a Monastic Fraternity or any other form of Monastic Community, but as a ‘House of Pilgrims’”.

Upon signing the agreement, due gifts were exchanged between the Leaders of the two Churches.

Immediately afterwards, His Beatitude Theophilos received the Letters of Commendation of His Beatitude Daniel, Patriarch of Romania, for the appointment in Jerusalem of the Representative of the Patriarchate of Romania, Archimandrite Timotheos.