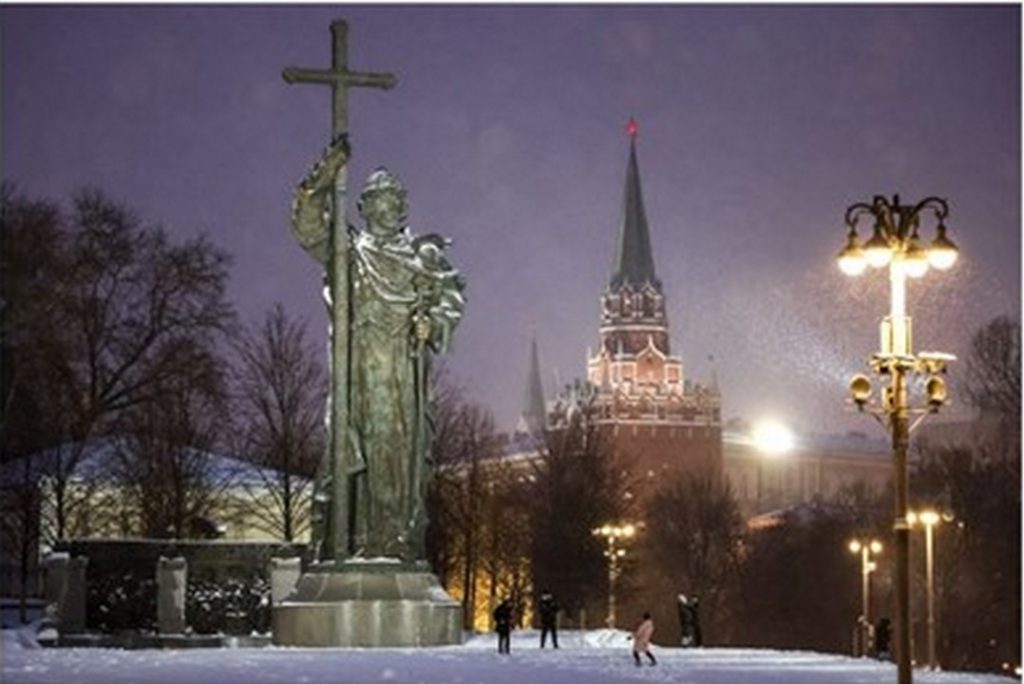 A monument to Prince Vladimir the Great at Borovitskaya Square in Moscow, Jan. 5
PHOTO: ZUMA PRESS

While Vladimir Putin is determined to reconstitute the old Soviet Union as a sphere of unchallenged Russian influence, Russian imperialism has a history that long antedates Mr. Putin. Czarist Russia was an expansive imperial power, extending its hegemony over the Eurasian landmass to the Pacific Ocean. Lenin, Stalin and their epigones, despite their ideological rejection of czarism, acted as de facto Great Russian imperialists in assembling the Soviet Union and maintaining it by brute force. In lamenting the demise of that prison house of nations as the greatest geopolitical disaster of the 20th century, Mr. Putin was in part mourning the failure of the imperial project begun by Peter the Great. Yet Russian imperialism has even deeper cultural roots that influence Mr. Putin’s assault on Ukrainian sovereignty today.

The crucial moment in the lengthy process of the Christianization of the eastern Slavic peoples was the Baptism of Rus’ in 988. Then, the baptized Kyivan Prince Vladimir returned to his capital after a military victory in Crimea and urged his people to follow his example by being baptized en masse in the Dnieper River. They did, and others in the region followed. More than a millennium later, the meaning of the Baptism of Rus’ for Christianity in that part of the world remains sharply contested—and relevant to contemporary geopolitics.

The Russian Orthodox Church’s insistence on being the sole heir of the Baptism of Rus’ is an integral part of the longstanding Russian claim, now deployed by Mr. Putin, that Ukraine is not a real nation with its own culture and history. At best, Ukraine is a “little brother” to the Russian hegemon. Yet the various Ukrainian Orthodox Churches and the Ukrainian Greek Catholic Church have claims to the heritage of 988 at least as strong as the Russians’. The Baptism of Rus’, after all, took place in Kyiv and its environs when Moscow was a thick forest inhabited by wolves and bears.

While the ethnographic, cultural and ecclesiastical history that unfolded between 988 and today is complex, one modern incident illustrates the nexus of Russian imperialism, Soviet power, the Russian Church’s proprietary claim to the Baptism of Rus’ and Mr. Putin’s Ukraine policy.

During Hitler’s onslaught on the Soviet Union, Stalin cynically decided that Russian Orthodoxy, whose clergy he had killed in the tens of thousands, could be a useful tool in the “Great Patriotic War” against his erstwhile German allies. Stalin restored the Orthodox patriarchate of Moscow, and the Russian church gave legitimacy to the Soviet regime by blessing sacrifices of life, liberty and treasure on behalf of the Motherland. The imperial instinct remained, however, as did the state-controlled Russian church’s determination to own and control the heritage of 988.

Thus in 1946, Russian Orthodoxy’s leadership, working with the Soviet secret police, the NKVD, engineered a contrived Sobor, or church council, to liquidate the Ukrainian Greek Catholic Church, which had become a safe-deposit box of Ukrainian cultural identity and national aspiration.

The previous year, the Ukrainian church’s leadership had been arrested. Those who weren’t murdered were condemned to Gulag camps. The coerced “council,” virtually at gunpoint, acquiesced to an ecclesiastical variation on classic imperialism, as the Russian Orthodox Church absorbed the Ukrainian Greek Catholic Church, which ceased to exist legally. That dissidents among the Ukrainian clergy and faithful, without parish churches or other institutions, maintained the world’s largest underground religious community for the next 45 years was little less than miraculous. Today, the Ukrainian Greek Catholic Church is playing a significant role in building a religiously tolerant, democratic Ukraine.

It might have been hoped that a post-Soviet Russian Orthodox Church would similarly disentangle itself from state power and help rebuild a civil society morally shattered by communism, but Patriarch Kirill of Moscow has done the opposite. The patriarch, whose early career path suggests collaboration with the KGB, has linked the Moscow patriarchate ever more closely to the Kremlin. This includes endorsing Mr. Putin’s absurd claims to be a defender of Christian civilization and underwriting the Putin policy of rebuilding Russian hegemony in the former Soviet space, now styled the Russkiy mir (“Russian world”).

If, as Patriarch Kirill and other Russian churchmen insist, Russian Orthodoxy holds a monopoly on the heritage of the Baptism of Rus’, then Ukraine is and must be part of the Russkiy mir. So there will be no pushback on Russian aggression in Ukraine from Patriarch Kirill who, at Mr. Putin’s 2012 inauguration, declared God to be the divine source of the president’s power and described Russian Orthodoxy as both guarantor and pastor of Mr. Putin’s personal autocracy.

For a Christian communion with the rich spiritual and theological resources of Russian Orthodoxy to legitimize tyranny and aggression is tragic. That, sadly, is the logic of the distorted history of the baptism of the eastern Slavs perpetrated by too many Russian Orthodox leaders.