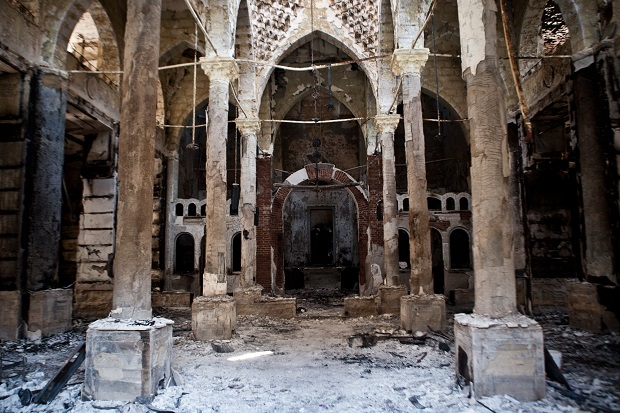 The last month and a half has seen perhaps the worst anti-Christian violence in Egypt in seven centuries, with dozens of churches torched. Yet the western media has mainly focussed on army assaults on the Muslim Brotherhood, and no major political figure has said anything about the sectarian attacks.

Last week at the National Liberal Club there was a discussion asking why the American and British press have ignored or under-reported this persecution, and (in some people’s minds) given a distorted narrative of what is happening.

Among the four speakers was the frighteningly impressive Betsy Hiel of the Pittsburgh Tribune-Review, who has spent years in Egypt and covered Iraq and Afghanistan. There were lots of stories of Muslims protecting Christian neighbours, but there were also incidents with frightening echoes; Hiel described a man riding on his bike past a burned down church and laughing, which brought to my mind the scene in Schindler’s List when local Poles make throat-slitting gestures to Jews en route to Auschwitz.

Some of this has been reported, but the focus has been on the violence committed against the Brotherhood. Judging by the accounts given by one of the other speakers, Nina Shea of the Center for Religious Freedom, the American press is even more blind, and their government not much better; when Mubarak was overthrown one US agency assessed the Muslim Brotherhood as being ‘essentially secular’.

The night ended with historian Tom Holland declaring sadly that we are now seeing the extinction of Christianity and other minority faiths in the Middle East. As he pointed out, it’s the culmination of the long process that began in the Balkans in the late 19th century, reached its horrific European climax in 1939-1945, and continued with the Greeks of Alexandria, the Mizrahi Jews and most recently the Chaldo-Assyrian Christians of Iraq. The Copts may have the numbers to hold on, Holland said, and the Jews of Israel, but can anyone else?

Without a state (and army) of their own, minorities are merely leaseholders. The question is whether we can do anything to prevent extinction, and whether British foreign policy can be directed towards helping Christian interests rather than, as currently seems to be the case, the Saudis.

The saddest audience question was from a young man who I’m guessing was Egyptian-British. He asked: ‘Where was world Christianity when this happened?’

Bishop Angaelos, leader of the UK Copts, also expressed disappointment at the response from other religious leaders, saying that if Christians burned down 10 synagogues or mosques, let alone 50, they’d be going over to show their sympathy and shame.

The most outspoken British religious leader has been Rabbi Jonathan Sacks, and the debate brought to mind something Rabbi Sacks recently said about Middle Eastern Christians, comparing their fate with those of the Jews in Europe, and quoting Martin Luther King: ‘In the End, we will remember not the words of our enemies, but the silence of our friends.’