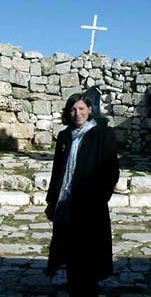 I stared out my kitchen window one more time and simply saw too many lights across the mountainside. They belong to the new illegal Israeli settlement that has been going up during the past few years regardless of the results of any negotiations between Israelis and Palestinians. I was reminded of the film I saw the other night. The Stones Cry Out: The Story of the Palestinian Christians was screened at Notre Dame of Jerusalem Center to a full house packed with an audience of locals and internationals as well as the film’s director, Yasmine Perni. The documentary brings into sharp focus this deeply moving human tragedy and renders the truth accessible to the outside world.

I was profoundly touched by those who were interviewed and who shared their experiences of the 1948 catastrophe, including Archbishop Elias Chacour, who reflected on the complete destruction of his village; the late Gabi Baramki, president of Birzeit University; Hannan Ashrawi; civil society activist Ghassan Andoni, and Rev. Mitri Raheb, currently celebrating his silver anniversary of ordination, 25 years of ministry and service.

One of the most magnificent scenes of the film shows the celebration of the miracle of the Holy Fire in Jerusalem. This symbol of hope reminds every Christian that eternal life is the ultimate goal. It serves also to remind and encourage every Palestinian that hope is still alive, hope for new life with justice and freedom and an end to oppression.

Rev. Naim Ateek introduced the film, in both Arabic and English, highlighting its importance in promoting the birthplace of the Church in Jerusalem and in affirming Palestinian Christians as part of “a beautiful mosaic in our country.”

Some people in the audience wondered why Palestinian Christians in Gaza, numbering less than 3,000 faithful, were not featured. Yasmine admitted that she had hoped to cover this community, but it was simply not possible given the recent wars on Gaza and the stressful interviews that she had already conducted. Also not mentioned in the film were the efforts of Kairos Palestine, a group of Palestinian Christians who authored the document “A Moment of Truth,” and my adopted village of Taybeh, a small Christian village nestled in the rolling hills near Ramallah.

For more information about The Stones Cry Out or to order the film on DVD, visit http://www.thestonescryoutmovie.com.