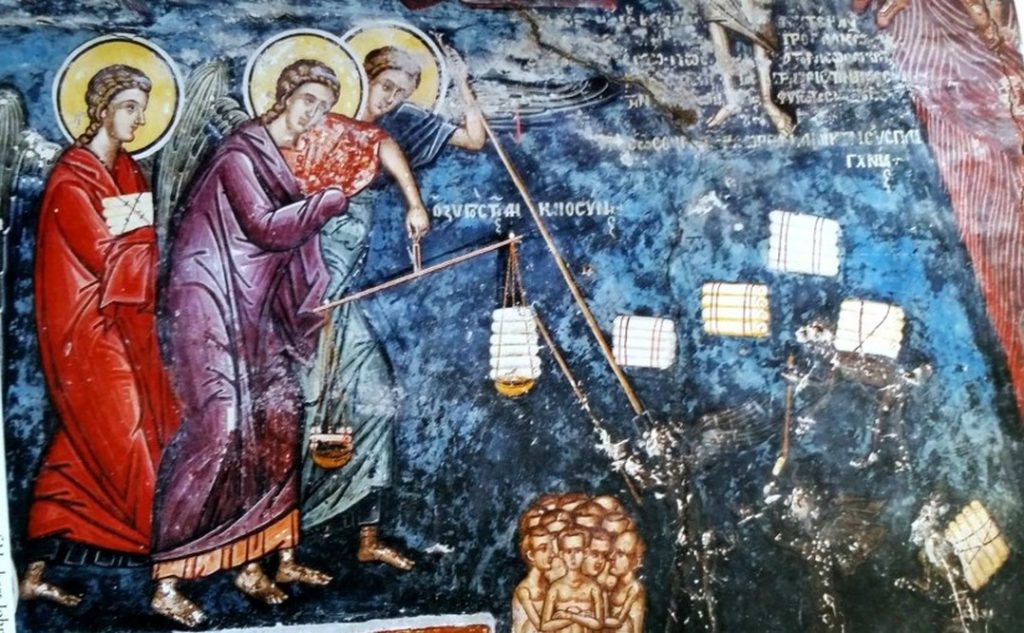 One of the most perplexing aspects of pastoral ministry, as experienced in my personal encounters with my parishioners, surfacing often during confessions or spiritual counselling, has to do with the subject of exorcism, evil eye, and recently, toll booths in afterlife, toll-gates which our departed brethren are compelled to go through as they sojourn to Heaven or to eternal damnation. I have come to the realization that these questions arise as a result of pathological symptoms of fear, propelled by an innate chronic dread of a vengeful God, determined to punish the transgressor of His law and reward the follower of His commandments. The questions are formulated in a spirit that ranges from serious concern to holy terror about the possibility of the soul failing to pass through these check-points at the risk of underperforming and retained or transferred to other toll-houses for further clarifications, clearing or demotion, subjected to stricter examinations based upon a more thorough investigation. I confess that I had not given serious thought to these toll-gates to Heaven, having consigned them to the realm of spiritual folklore, together with the entertaining instances of being the pathetic subjects of evil tongues (kakoglossia, glossofagia), falling under the spell of the evil eye (vaskania), or plainly, falling under the spell of magic incantations, contemplated by malicious persons threatening the intended victims’ mental integrity and material well-being, aimed at destroying their family, business, flattening the foundations or the roof of their house, causing the disintegration of their vehicle, prompting the extermination of their loved ones.

I began to be seriously concerned about the harmful effects of the theology of the toll-gates after reading the review of Fr. Andrew Louth in Sobornost of the enormous book The Departure of the Soul According to the Teaching of the Orthodox Church, which presents the tollbooths theology in a traditional light as one of the doctrinal foundations of Orthodoxy. This claim to doctrinal legitimacy is supported in the book by a host of distinguished luminaries in the field of Orthodox spirituality, even though most of the evidence presented is based on spurious sources, despite the lack of substantiation of these claims by the theology of the Fathers of the Church, or any mention of them in the funeral rites, in the hymns composed by St John of Damascus, or in the memorial services (mnemosyna) of the Church.

Louth states that the belief in tollbooths “is a piece of popular Byzantine folklore, owing more to Mediterranean paganism than to authentically Orthodox beliefs”, based on the presumption that we have full knowledge about all the details of life after death.

The only explanation I could find to justify the appearance of the toll-house phenomenon was detected in the Egyptian Book of the Dead, to which we also owe the origins of the evil eye, in the vignettes depicting the eye of Horus, a powerful symbol warding off evil and bestowing protection, worn as an amulet, or painted of old on the ships’ bows sailing in the Mediterranean, keeping at bay malevolent spirits. According to this funeral book the spirit of the deceased had to go through a series of gates and other obstacles, guarded by supernatural creatures with ghastly names, (He who lives on snakes, He who dances in blood), human figures with animal heads, equipped with harrowing swords. The deceased were required to give an account of their deeds, while their heart was weighed in a balance against a feather, and if the scales balanced, and the answers were satisfactory, they were released to the afterlife; if not, they were devoured by slaying divinities on behalf of Osiris, the god of the dead. It is indicative of the debt owed to this Egyptian Book of the Dead regarding the development of the belief in tollbooths the fact that the only detailed description of these horrors is ascribed to Saint Makarios of Egypt, who must have been familiar with the post-mortem beliefs of the Egyptians.

Putting aside questions as to how these pagan notions of vindictive retribution and lex talionis type of morality based on retaliation found their way into the Christian belief in the grace of our Lord Jesus Christ, in the love of God the Father, and in the communion of the Holy Spirit, we are left wondering about the mindset that channels these horrendous ideas of salvation in the Orthodox framework of redemption, which can only be understood through Christ’s loving sacrifice on the Cross. Who, in his or her quest for salvation, can find consolation in this spirituality of terror that instills fear and trembling on the poor soul preparing to depart from this world? What sort of pastoral guidance does a so-called charismatic class of spiritual fathers and mothers provide by resorting to this menace that can only produce a deranged, theophobic, sadistic spirituality? How many tollbooths and gates of terror the thief on the Cross had to pass through before gaining admittance to Paradise? As long as Orthodoxy succumbs to the terrorism exerted by this kind of  pastoral ‘spirituality’, there is no hope in recovering the authentic spirit of our tradition, nurtured by the judgment of God, which is His love and mercy to all repentant sinners, irrespective of tollbooths and other instruments of transcendental ordeal favoured by some spiritual guides adept at preserving their reign of terror.