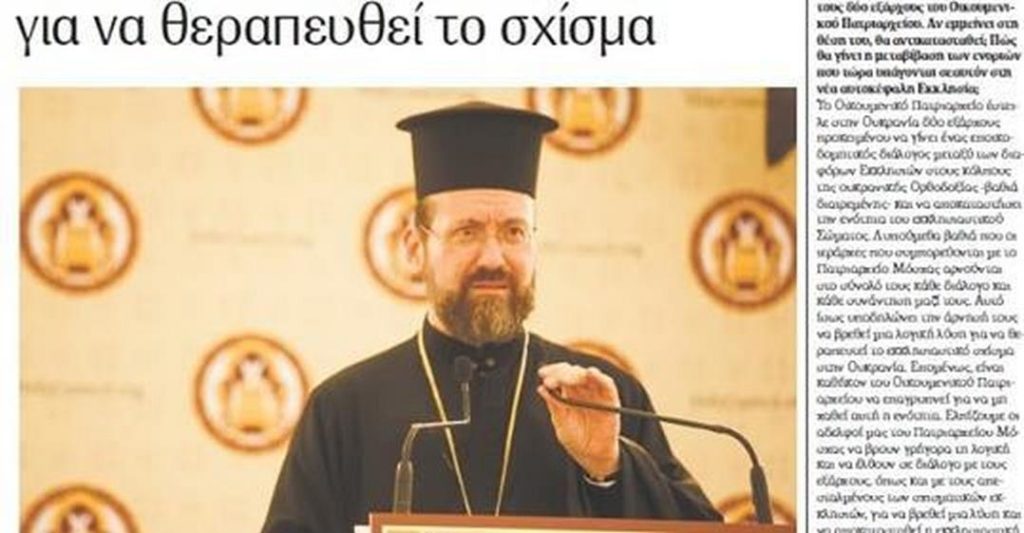 The Permanent Representative of the Ecumenical Patriarchate to the WCC, Archbishop Job of Telmessos, gave the following interview to Marina Ziosiou of the Greek newspaper “Ethnos of Sunday” about the ecclesiastical issue of autocephaly of Ukraine:

The hierarch points out that the Patriarchate of Moscow rejects any dialogue and states that it is strange that Orthodox Ukrainians do not want to be under the jurisdiction of Kiev. Archbishop Job of Telmessos, Permanent Representative of the Ecumenical Patriarchate to the World Council of Churches gives his own point of view on the issue of autocephaly in Ukraine. “Who threatens the Ecumenical Patriarchate with bloodshed, rebellion and civil war does not serve the good of the Church and her unity, but encourages division and schism,” says the hierarch of Ukrainian origin, while saying that the granting of autocephaly by the Mother Church is proposed not as a “weapon” to declare the war or to divide Orthodoxy, but as a “medicine” to cure a schism that lasts for thirty years.

The Orthodox faithful are deeply troubled by the conflict between the Phanar and Moscow and are wondering how a dispute over the functioning of a local church can lead to a rupture and a split within the Orthodox Church?
The Ecumenical Patriarchate proposes autocephaly in Ukraine not as a “weapon” to declare war or divide Orthodoxy, but as “medicine” to cure a schism that has lasted for thirty years. After the independence of Ukraine in 1991, all the bishops of the Orthodox Church in Ukraine, under the jurisdiction of the Moscow Patriarchate, had already asked the Patriarch of Moscow for autocephaly in 1991 and 1992 to prevent the proliferation schisms. Unfortunately, the Moscow Patriarchate did not want to grant it, and this only aggravated the situation. During these thirty years, the Moscow Patriarchate believes that in order to achieve the unity of the Church, schismatic communities must return to its jurisdiction. This policy of return is similar to the ancient policy of the Church of Rome which gave birth to Uniatism. Today, the reality is that there are millions of Orthodox Christians in Ukraine who do not want to be under the jurisdiction of Moscow for understandable reasons. Therefore, the unity of Orthodoxy must be saved by applying the canonical economy and through the grace of God.

From what is known so far, it seems practically difficult to normalise and set up an Autocephalous Church in Ukraine. There are Russian-speaking Orthodox populations in Ukraine who may not wish to belong to the new local Church. What will happen in this case?
Autocephaly transcends ethnophylism and regionalism by ensuring the unity of the Church within the local Church as well as between the local Churches. It does not preclude serving the pastoral needs of Russian-speaking, Romanian-speaking, Greek-speaking, English-speaking or any other believers living in Ukraine, and allows for the communion with Constantinople, Moscow and all other local Orthodox Churches.
We must not forget that the Orthodox Church is one, because it is the Body of Christ. Therefore, it is not possible to divide the body of Christ. The Church belongs to Christ and not to Constantinople, Moscow, Kiev or anyone else. For me, it is a little strange that an Orthodox living in Ukraine does not want to be under the jurisdiction of Kiev but under the jurisdiction of Moscow…

The Metropolitan of Kiev Onuphriy refused to meet the two exarchs of the Ecumenical Patriarchate and seems to be solidary with the Moscow Patriarchate. If he sticks to that, will his position be replaced? How will the parishes that are now under his jurisdiction be transferred to the new Autocephalous Church?
The Ecumenical Patriarchate sent to Ukraine two exarchs to conduct a constructive dialogue between the different ecclesial entities within the deeply divided Ukrainian Orthodoxy in order to restore the unity of the ecclesial body. We deeply regret that the hierarchs of the Moscow Patriarchate totally reject any dialogue and any meeting with them. This may indicate their refusal to find a reasonable solution to the ecclesial schism in Ukraine. Undoubtedly, behind these actions are political ambitions dictated not in Kiev but in the Kremlin, when there is a danger not only of increasing the schism in Ukraine, but also of contributing to the fragmentation of Orthodoxy. It is therefore the duty of the Ecumenical Patriarchate to look after so as not to lose this unity. We hope that our brothers from the Moscow Patriarchate will quickly return to reason and enter into dialogue with them, as well as with the representatives of the schismatic Churches, in order to find a solution and restore the ecclesial canonicity in Ukraine.

Many argue that the new order of things that will follow will probably be accompanied by immediate reactions combined with the war in the eastern provinces of Ukraine. Can the Ecumenical Patriarchate ensure that everything goes well and peacefully?
It is unacceptable to keep millions of Orthodox Christians in schism for more than a generation. Anyone who threatens the Ecumenical Patriarchate with bloodshed, rebellion and civil war does not serve the good and the unity of the Church, but encourages division and schism.

The schism between the Eastern and Western Churches occurred mainly for dogmatic reasons. The Moscow Patriarchate refers to it strongly regarding the Ukrainian question. What does it mean and is it justified?
You are right to point out that the main reason for the division between East and West was purely dogmatic. Because of the addition of the Filioque to the symbol of faith, the Greeks accused the Latins of having introduced an innovation into the faith. This is not the case of Ukraine. People can understand that the ecclesial schism in Ukraine is not due to a theological problem, but a canonical problem. It is not fair to accuse anyone of heretics and to make threats that the granting of autocephaly would create a schism even greater than that of 1054.