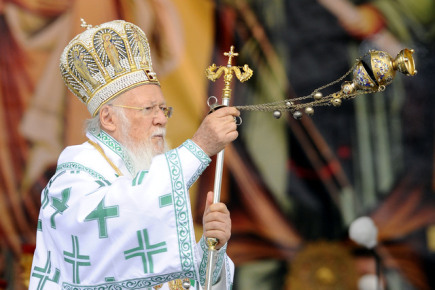 Mikulcice – About 2000 people attended the liturgy the Orthodox Church Constantinople patriarch Bartholomew celebrated in Mikulcice, a place linked to the medieval Christian missionaries SS Cyril and Methodius, in spite of the rainy weather today.

The organisers expected up to 10,000 visitors to come but a number of them were evidently discouraged by the adverse weather.

The liturgy, in which a dozen of Orthodox Church dignitaries took part, was held to mark the 1150th anniversary of the arrival of SS Cyril and Methodius in Great Moravia from Thessaloniki, then the Byzantine Empire.

Pilgrimages to Mikulcice take place annually in honour of the two saint brothers who created a special script for Slavs and translated basic Christian texts into the Slavic language.

“We are grateful for this legacy,” Simeon, Orthodox archbishop of Olomouc-Brno, Moravia, said in his sermon today.

Czech prevailed among the pilgrims attending the mass, but other languages could also be heard, including Russian.

Visitors from Russia have brought in an icon they consider miraculous and that was installed in front of the liturgic space during the ceremony.

In the 1.5 million Czech Republic, about 30,000 people claim their adherence to the Orthodox Church.

Bartholomew has been Archbishop of Constantinople and ecumenical patriarch since late 1991. In a Turkish daily he admitted the possibility of the Orthodox Church reuniting with the Catholics after a schism of 1054.

The main celebrations marking SS Cyril and Methodius´ arrival are annually held in Velehrad, elsewhere in south Moravia, on the arrival date anniversary on July 5, which is a national holiday.