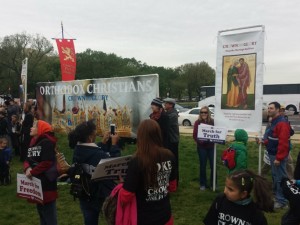 Several thousand people including religious leaders marched in Washington against same-sex marriage as the US Supreme Court prepares to hear arguments on the deeply divisive issue in the coming days.

Crowds rallied from the US Capitol to the Supreme Court yesterday, carrying placards reading, “A Child Needs a Father and a Mother” and “March for Truth.”

The gathering comes with the top court Tuesday set to consider whether same-sex couples have a constitutional right to wed in the US, with a final decision expected in June.

Currently, individual states are responsible for determining marriage laws, with 37 out of 50 US states and the capital Washington legalizing gay unions. 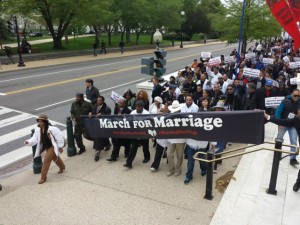 “We will not be silenced… We are not alone,” Archbishop Joseph Kurtz, president of the US Conference of Catholic Bishops, told the crowd to cheers.

Several members of the Protestant and Orthodox church were also present at the rally, along with a strong turnout from the Hispanic community.

Some had travelled from out of town to show support for the anti-gay marriage cause.

Citing the Bible, Hiram Garcia, 49, from Philadelphia, told AFP that legalising gay marriages would create “a Godless society, where people are far from God.”

Caroll Skinner, 64, agreed, and said she came to the rally to make a statement.

“Their relationships are unions, not marriages,” said Skinner.

“Marriage begins with God, not with the state,” he said.

Some experts say it seems inevitable that the nation’s top court will recognize gay marriage.