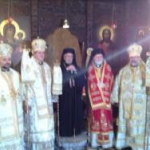 Video of the consecration service is now available online from Noursat.

On Sunday, December 11, 2011, three new auxiliary bishops were consecrated for the Self-Ruled Antiochian Orthodox Christian Archdiocese of North America at the Church of the Dormition of the Theotokos in the Patriarchal Monastery of Our Lady of Balamand, Balamand, Lebanon. Their Graces, JOHN, ANTHONY and NICHOLAS were consecrated as bishops of Worcester, Toledo, and Brooklyn and will serve as auxiliaries to His Eminence, Metropolitan PHILIP.

His Beatitude, IGNATIUS IV, Patriarch of the Great City of God, Antioch, and all the East, presided at the liturgy and was assisted by 12 bishops including several Metropolitans from Lebanon and Syria. His Grace, Bishop JOSEPH represented His Eminence, Metropolitan PHILIP at the consecrations and was accompanied by more than 60 clergy and laity from throughout the Archdiocese including many archdiocesan board members. The group was organized and led by the Vice-Chairman of the Archdiocesan Board of Trustees, Mr. Fawaz El-Khoury with assistance from Archpriest Thomas Zain. Orthros began at 8:30 and the divine liturgy followed. The monastery church was packed to capacity and the entire service was broadcast live by Noursat Television in Lebanon and throughout the world. Just before the little entrance the three candidates were led before the Patriarch to give their confession of faith, affirming and promising to uphold the teachings of the Holy Orthodox faith and pledging obedience to the Patriarch of Antioch, the Holy Synod and the Metropolitan of the Archdiocese of North America.

Following the chanting of the Phimi, the three candidates were presented by their sponsors for consecration to the holy and sacred episcopacy. Bishops led the three candidates around the altar as the clergy chanted the troparia and the Patriarch invoked the Holy Spirit to descend upon them as the other bishops held the open Gospel book above their heads. After the prayers were complete, the new bishops rose and were vested to the shouting and chanting of AXIOS! MUSTAHIK! WORTHY! many times as they doned their new episcopal vestments. They then took their places around the holy table next to their brother bishops as the liturgy continued. Prior to Holy Communion, while the numerous clergy were communing, the Patriarch addressed the new bishops and, one by one, each responded with dignity and graceful words. They were then presented with their mitres (crowns) and pastoral staffs. At the same time, the Patriarch also made a surprise announcement elevating Bishop JOSEPH to the rank of Archbishop in honor of his many years of service as a bishop both in the archdiocese and in the patriarchate. May God grant him many years!

At the conclusion of the divine liturgy, the three candidates had a chance to receive the good wishes of the hundreds of people present and then the entire group, along with invited guests, enjoyed a wonderful meal and celebration at a local restaurant.

On Saturday evening, then Archimandrite Anthony was received in his ancesteral home of Qalhat. The entire villlage awaited his arrival and rang the church bell as the village priest welcomed the three bishops-elect and the group, and we then processed to the village church for prayers of thanksgiving and a small reception prior to proceeding to the Balamand for great vespers. Likewise, on Sunday afternoon, following the banquet, the entire group went to Douma, the ancesteral home of Bishop JOHN, and was treated to a similar experience.

On Sunday evening, the group attended a wonderful concert at St. George Cathedral in Beirut. The concert is part of a Christmas concert series in many different Christian Churches in Beirut. We were fortunate as the timing for St. George Orthodox Cathedral coincided with our visit. We were treated to a wonderful concert of byzantine music by the Orthodox choir (both the adult and children’s choir) of the Archdiocese of Beirut under the direction of Father Romanos Joubran.

In addition to all the offical activities, the group has had the chance to visit many sacred and other historical sights around Lebanon. We are grateful to Mr. Fawaz El-Khoury for all his hard work in planning this sacred pilgrimage to witness this holy event.