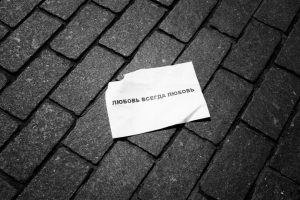 The Russian government’s shutdown of the country’s top LGBT website, BlueSystem, is just the latest entry in its gruesome record with respect to LGBT rights. While the time for passive concern by all parties has long past, it is a matter of utter amazement that American Orthodox Christians—even the most conservative—are not more vocally horrified about events in Russia.

The complicity of the Russian Orthodox Church and Patriarch Kyrill of Moscow in Russia’s systematic persecution of its LGBT citizens speaks to a deep crisis in Orthodoxy’s encounter with the modern world. This crisis threatens to align the Church with some of the most odious actors around the globe and to undo so much of what has made Orthodox theology and culture unique through the centuries.

It is time for American Orthodox Christians to object.

As with many things, history and human shortcomings are the culprit in this situation. From the High Middle Ages, the history of Orthodoxy has largely been one of siege. Western Crusaders sacked Constantinople in 1204. This seemed like the worst of calamities until two and a half centuries later, when the city fell to the Ottoman Turks. The fall of Constantinople plunged what remained of the Byzantine Empire, and consequently huge tracts of the Orthodox world, under Turkish rule. This 400-year period of occupation was only temporarily interrupted by Western Christian empires vying with the Ottomans.

When in the 19th century, Serbian and Greek nationalist movements began to throw off the Turkish yoke, independence was often accompanied by interference from the modern Western powers, such as Great Britain, France and the United States. Throughout this entire time, Russia was actually the exception for the most part. At least until 1917, when “The Third Rome” became the capital of atheistic communism.

Throughout the same period, poverty, oppression and occupation drove millions of immigrants from traditionally Orthodox lands to the far corners of the globe: Canada, South Africa, Australia and the United States. Thus Orthodoxy emerged in the United States as an immigrant church, the church of Southern and Eastern European immigrants, as well as Arabs—all of whom occupied the lower rungs of America’s all-important racial pecking order. Consequently, respectability and assimilation quickly became important goals of these communities.

This longing for assimilation, if not always respectability, has arrived over the last three decades in a rather unexpected form. For the first time, Orthodox Christianity in America has seen conversions not propelled by marriage. The source of these conversions has largely been disaffected mainline Protestants and Roman Catholics fearful that their own traditions have become too progressive.

Of course, these are the most innocuous of American converts. American Orthodoxy has also managed to become the go-to religion of the alt-right, courtesy of being sufficiently medieval without being Roman Catholic.

The combination of these historical realities has created an environment in which—even though there exists a progressive plurality among self-identified American Orthodox Christians—public statements that could be perceived as critical of the Orthodox Church and its social teachings are rare. Those cradle-Orthodox from immigrant backgrounds (who make up the majority of progressive Orthodox Christians) have inherited their parents and grandparents desire for belonging in America and know the stories of those grandparents’ experiences on America’s margins. For far too many, public critiques of Orthodox leadership or traditionally Orthodox nations seems a kind of treason to the upward mobility their ancestors fought so hard to achieve.

As for that wave of new American converts, it is arguably unclear how much objection to the actions of the Moscow Patriarchate there really is. From conservative former-mainline Protestants trapped in a zero-sum game Culture War mentality to truly reprehensible fascists, the culture of conversion with American Orthodoxy does not lend itself to this kind of dissent.

That is not to say there isn’t much to which one could object. Russia has become a byword for the oppression of sexual and gender minorities. Poll after poll and study after study indicate that nowhere outside the Middle East and Africa is more homophobic than Russia. This homophobia manifests itself in everything from oppressive “propaganda” laws to unconscionable acts of mob violence. In short, the plight of LGBT people in Russia today is a human rights crisis, a crisis that has been fostered, protected and encouraged by the Moscow Patriarchate and the Russian Orthodox Church at large.

And just as we (admittedly unfairly) demand that progressive and moderate American Muslims challenge the most radical members of their tradition no matter where they exist in the world, so too must American Orthodox Christians hold to account those who wield Orthodoxy as a weapon.

In the case of Russia’s treatment of its LGBT citizens, this does not even involve engaging the Church’s teachings and history regarding homosexuality, same-sex relationships or marriage. It involves defending the Church’s ancient teachings regarding human dignity, compassion and agape. It demands declaring in no uncertain terms that “violent Orthodox mobs” (as those who attack LGBT activists in Russia are routinely described) are irreconcilable to the heart of Orthodoxy. It requires an unconditional affirmation that anyone who would join a violent mob, for any reason, has estranged himself from the Bride of Christ.

The voices of Orthodox Christians must join the chorus of condemnation against Russia’s human rights record. This opposition must come, because it is necessary if the most beautiful parts of Orthodoxy are to be preserved in Russia, in America, and throughout the world. But most importantly, this opposition must come because it is perhaps the most important opposition that can emerge against the horrific crimes that are being committed in Russia.

For nearly a millennium now, the Orthodox world has been dominated by a sense of attack—from the East and the West, in its traditional lands and in its diaspora. This constant sense of siege has made it far too easy for the Russian government and the Russian Church to dismiss any criticism of its treatment of LGBT people as yet another attack on Orthodoxy. When faithful Orthodox Christians become the critics, this line of evasion disappears. For this reason, if no other, public and frequent admonitions of the Russian government’s treatment of sexual and gender minorities, and the Moscow Patriarchate’s support of it, have become the duty of American Orthodox Christians. Silence is no longer an option.