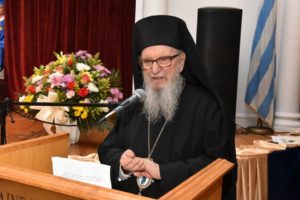 The National Herald’s Publisher-Editor, Antonis H. Diamataris, writes in Kathimerini, the leading newspaper of Greece, about the crisis at the Archdiocese of America. Mr. Diamataris makes the point for a new leadership at our church.

Here is the article:

In the history-filled chambers of the Holy Synod of the Phanar, in mid morning, last week, the Ecumenical Patriarch Bartholomew I asked Archbishop Demetrios of America to submit his resignation. Iakovos, a generation ago, had obeyed. Demetrios refused. “I still have a lot of work to do”, he responded.

It was an astonishingly rebellious act.

Bartholomew I had entrusted him, despite the strong objection of some of his closest friends and allies, to lead the must – keep Eparchy of the United States of America with its vibrant Greek – American community and Church, almost 20 years ago .

Never before in the long and proud history of our community in America had we fallen to such a low point. So what kind of work does the Archbishop has in mind to do in order to justify his staying at his position even a day longer?

The answer will be become clear once we put things into perspective:

Having gone through the tumultuous years of Spyridon – 1996 to 1999 – that split the community apart, the arrival of Demetrios of Vresthenis at age 74, reunited the community and created a new sense of hope and trust that were sorely missing.

No fair minded person can, nor should, deny that.

Had he left at the 5 year mark, as is said that he had agreed to do from the beginning, he would have been regarded as one of the finest Archbishops of America.

However, having accomplished that, it became self-evident that he was neither an adept administrator nor a statesman.

What followed was a long period of stagnation which inevitably led to the erosion of support among the faithful, the unraveling of the organizational structure of the church, the closing of numerous Greek schools and the further marginalization of the Theological School and Hellenic College in Boston to such an extent that they run the risk of not even opening in September.

It thus became painfully apparent that Demetrios had to go. The Church needed to move on. There was no time left to waste.

But Demetrios would not budge. He was seemingly above the Church and the community. Or the patriarchate.

The terrorist attacks of 9/11 destroyed, along with everything else surrounding the majestic twin Towers of the World Trade Center, the humble but historic church of St. Nicholas. A church build in 1916 by the Greek seamen who would frequent the church following their arrival at the Port of New York after long and sometimes dangerous voyages.

After protracted negotiations with the Port Authority of New York and New Jersey, our Archdiocese finally secured a location upon which to build the new St. Nicholas church.

Given its unique location the whole word would see it as a testimonial to the financial might of the community and the spiritual and political reach of the patriarchate.
And Demetrios, though he played practically no role in the fundraising, was hell bent to officiate at the Thyranixia.

The Archdioceses secured the services of Spanish architect Santiago Calatrava and started off with a budget of $20 Million. It soon skyrocketed to $ 80 million!.

When Εθνικός Κήρυξ – National Herald- broke the news in September 2017 that the Archdiocese was bankrupt, Demetrios’ reaction was to shoot the messenger. Meanwhile, in the midst of all this mayhem, a small group of dedicated professionals devised a plan to extinguish the gaping hole in the budget. It should be noted that the budget had ballooned to $30 million, double of what it was when Demetrios was enthroned.

What was the fallout of the unconstrained spending expenditures?

Approximately 30 people working for the Archdioceses were fired. The out of control expenses put on credit cards, limo rides and first class travel were eliminated. Communities were given a discount if they would prepay their monthly dues.

Although the picture significantly improved, we were soon reporting that money was used from one entity to pay obligations incurred by another entity.

Money from the building fund for St. Nicholas church, for instance, was used to pay Archdiocese’s debts. A whopping $15 million was missing. They said it was “unaccounted” for. The money, as far as is known, is still nowhere to be accounted for.

The work at the church building site has stopped, construction companies are suing the Archdioceses for money owed, and all fundraising activity has ceased because people refuse to blindly contribute their hard earned money until a comprehensive and accurate report is given illustrating clearly where the millions of money given, went.

Trust, that invisible but absolutely imperative ingredient that unites a community with its institutions and leaders has evaporated. So the Archbishop is desperately trying to borrow $10 million from a Greek American owned bank to stay afloat.

In doing so, he runs the risk of losing two magnificent buildings in Manhattan that he will, in all likelihood, use as collateral for the loan. And yet he has not assumed responsibility. Nor he has asked for forgiveness.

In the interim, the community is held hostage. The 33rd President of the United States of America, Harry S. Truman, popularized the saying “the buck stops here”, meaning that responsibility for something cannot and should not be passed along to someone else.

Archbishop Demetrios would do well to keep President Truman’s favorite expression, which Truman had emblazoned on a sign and atop the Resolute desk for much of his presidency, in mind.

In the meantime, the more this impasse is prolonged, the more credence is lent to the increasingly prevailing perception that the patriarchate is unable to impose its will. If this is so, then it’s failing to carry out the task that it has been historically charged with; the spiritual leadership over the Greek diaspora.