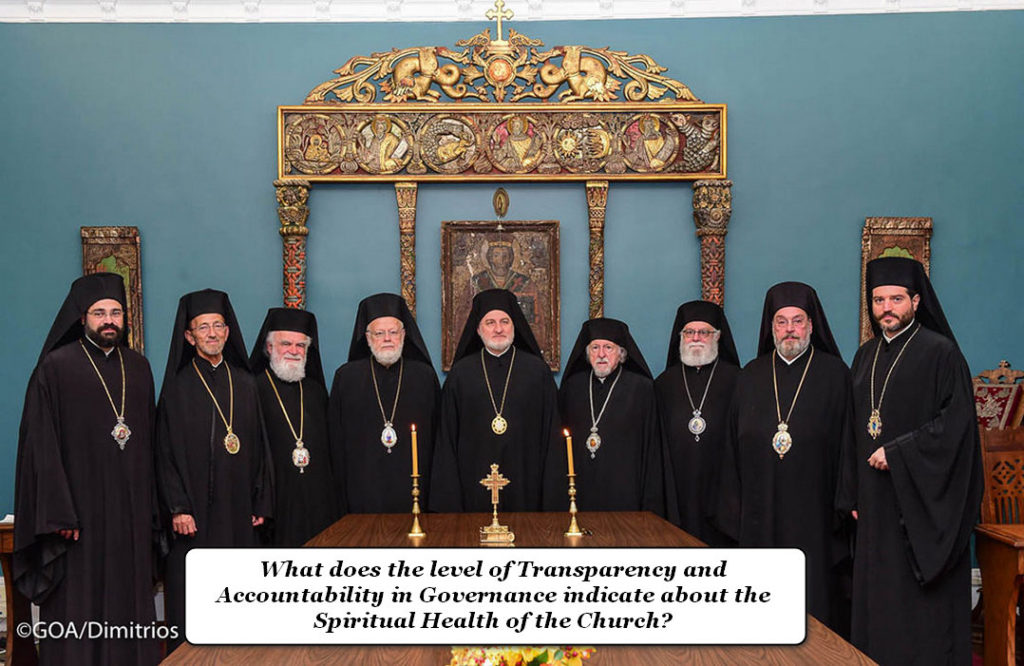 The Holy Eparchial Synod of the Greek Orthodox Archdiocese of America

The Orthodox Christian Laity (OCL) has been advocating for accountability and transparency in Church governance for more than three decades.  The success of OCL’s advocacy can be measured by the increasing use of those terms by Church leaders.

While the use of those terms is now common, the practice remains elusive. An example of the lack of transparency and accountability in church governance is the embarrassing story of the Greek Orthodox Archdiocese of America (GOA) and its tiny parish of St. Nicholas in Manhattan, whose building was destroyed by the Islamist terrorist attack on September 11, 2001.

What can the faithful of the GOA gather about St. Nicholas from news accounts, mostly in the secular press?

This is not what transparency and accountability look like.

For starters transparency requires answers to the following questions:

The Executive Committee has “in the interim, between meetings of the Archdiocesan Council, all of its authority”, [including its]“ investment powers with respect to the day to day management of the operating funds of the Archdiocese.” [Art. 5 Section 4 B. 1. Regulations]

“The Executive Committee shall: Prepare the proposed budget with the Archbishop, the Finance Committee and the appropriate heads of the departments of the Archdiocese for presentation to the Archdiocesan Council, for recommendation to the Congress.” [Art. 5, Section 4. B. 5. Regulations]

“Members of the Executive Committee shall be Directors of the Corporate entity of the Archdiocese as may be required by applicable law.” [Art. 5 Section 5. C.  Regulations]

Accountability means that every member of the Archdiocesan Council, and especially the members of the Executive and Finance Committees of the Archdiocesan Council during the almost twenty-year period from September 11, 2001, until now should account for their actions or lack of actions relating to the handling of the St. Nicholas matter.  At a minimum, those who served on the Council who claim to have no knowledge should apologize for their dereliction of duty in failing to ask questions and demand answers.  Those who served on the Executive and Finance Committees have a higher duty to account for their involvement.  Once again, those who claim ignorance of what happened must apologize for their failure to ask questions and demand answers.  Finally, all members of the Archdiocese who oversaw the project, approved change orders or were otherwise involved in overseeing this project must give a full accounting of their actions, and where appropriate must be disciplined, including removal from their positions.

Only by being truly transparent and accountable will trust be restored to the Archdiocese.