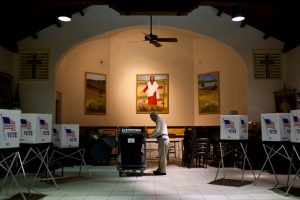 A precinct clerk preparing Good Shepherd Lutheran Church in Tampa, Fla., for use as a polling site for the Republican presidential primary in 2012. Credit Todd Heisler/The New York Times

According to Genesis 1, in four days, God made the heavens, the earth and all the vegetation upon it. But four days after Anthony Scaramucci’s filthy tirade went public, Team Trump’s evangelical all-stars — pastors and prominent laity who hustle noisily around the Oval Office trying to find an amen corner — still had not figured out what to say.

Fortunately, the White House relieved them of that onerous task by firing Mr. Scaramucci — not, please note, on the president’s initiative, but rather at the request of John Kelly, the new chief of staff. Meanwhile, the Christian Broadcasting Network ran a puff piece proclaiming that a “spiritual awakening is underway at the White House,” thanks to a Bible study with what “has been called the most evangelical cabinet in history.” That ought to still any skepticism emerging among the true believers for a while.

Is there anything Donald Trump can do to alienate evangelicals and other conservative Christians who support him? By now, it’s hard to think of what that might be. These are people who would never let men with the morals and the mouths of Mr. Trump and Mr. Scaramucci date their own daughters. And yet, Team Trump has no more slavishly loyal constituency.

This is not only wrong, but tragically so. The most pressing problem Christianity faces is not in politics. It’s in parishes. It’s with the pastors. Most of all, it’s among an increasingly faithless people.

The truth is, Christianity is declining in the United States. As a theologically conservative believer, I take no pleasure in saying that. In fact, the waning of Christianity will be not only a catastrophe for the church but also a calamity for civil society in ways secular Americans do not appreciate.

But preparing for this post-Christian future requires a brutally honest assessment of both the modern church and the contemporary world. This is painful, but denial will only make the inevitable reckoning worse.

First, Americans are falling away from the church in unprecedented numbers. According to a 2014 Pew study, more than one in three millennials refuse to identify with a religious tradition — a far higher number than among older Americans. Most of these young adults are likely to stay away from church as they age.

This generational shift is a watershed. Last year, the sociologists David Voas and Mark Chaves concluded that the United States is no longer a counterexample to the West’s secularization. America is on the same path of religious decline pioneered by Europe and Canada.

Second, the faith American Christians profess is, from a moral and theological perspective, shockingly thin. Christian Smith, a sociologist at Notre Dame, has been leading a long-term study of the religious and spiritual lives of millennials. Mr. Smith finds that what he terms “Moralistic Therapeutic Deism” has displaced authentic Christianity as the true religion of American Christians.

Moralistic Therapeutic Deism is a pseudoreligion that jettisons the doctrines of historical biblical Christianity and replaces them with feel-good, vaguely spiritual nostrums. In M.T.D., the highest goal of the religious life is being happy and feeling good about oneself. It’s the perfect religion for a self-centered, consumerist culture. But it is not Christianity.

“America has lived a long time off its thin Christian veneer,” Mr. Smith told me. “That is all finally being stripped away by the combination of mass consumer capitalism and liberal individualism.”

Since the 1980s, conservative Christians unwittingly participated in our own marginalization by placing too much hope in Republican politics. There’s nothing wrong in principle for Christians to bring our faith to the public square (if you disagree, take it up with the abolitionists and the civil rights movement). But the standard “religious right” model, based on the idea that the American people are a morally sound majority led by decadent liberal elites, was inaccurate.

Conservative Christians helped elect Republican politicians, but that did not stop the slide toward secularism. True, the church gained some access to power, but it failed to effectively counter popular culture’s catechetical force.

Too many of us are doubling down on the failed strategies that not only have failed to convert Americans but have also done little to halt the assimilation of Christians to secular norms and beliefs. Mr. Trump is not a solution to this cultural crisis, but rather a symptom of it.

These are not normal times. Pope Benedict XVI himself once said that the spiritual crisis the West faces is worse than anything since the fifth-century fall of the Roman Empire. This is why St. Benedict of Nursia is so relevant to Christians today.

The monk founded the Benedictine religious order amid the chaos and decadence of imperial Rome. He was merely searching for a way to serve God faithfully in community during a prolonged civilizational collapse. After his death in 547, hundreds, and then thousands, of monasteries arose in Western Europe, all following his “Rule of St. Benedict.” They helped preserve the faith through the Dark Ages and laid the groundwork for the rebirth of civilization out of barbarism.

Lay Christians in the 21st century are certainly not called to be cloistered monks. But Christians are going to have to step back to some meaningful degree from the world for the sake of building up orthodox belief, learning the practices of discipleship and strengthening our communities. The everyday practices and disciplines of Benedictine spirituality can be adapted to ordinary Christian life in the world.

And if we don’t? Father Cassian Folsom, the retired prior of the monastery in St. Benedict’s hometown, told me that Christian families and churches that don’t do some form of the Benedict Option are not going to make it through the trials to come with their faith intact.

There’s little reason to be optimistic, but every reason to be hopeful. Christian hope does not expect worldly success but believes that even suffering and defeat can work mysteriously for the greater glory of God. St. Benedict did not set out to save Western civilization. He only wanted to serve God in a time of unprecedented trouble, and lead others to do the same.

Today, we in the West owe an incalculable debt to the saint and his early medieval followers, whose visionary, disciplined faith bore spectacular fruit long after their deaths. This experience shows Christians that we have to think not in election cycles but in centuries.

In 1981, the philosopher Alasdair MacIntyre, observing the continuing cultural fragmentation of the West, said that we await “a new — and doubtless very different — St. Benedict.” If we Christians don’t quit looking for a political white knight to save us and open our eyes to the stark reality of Christianity’s exile status in our American Babylon, we will not see this new St. Benedict when he comes.

What would he say to the church, standing bedraggled on the beach of a culture-war Dunkirk? We have been routed, and are surrounded on all sides by a powerful enemy who holds the high ground and the initiative. If we are going to live to fight another day, we have to get on those little arks, sail toward safer harbor, then regroup, replenish and rebuild.

In the early Middle Ages, the churches and the monasteries were those tiny arks carrying the faith and the faithful across a dark and stormy sea. They can be once again. And must.