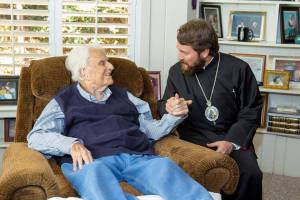 By: ON RELIGION By Terry Mattingly

When two global religious leaders embrace one another, someone is sure to turn the encounter into a photo opportunity.

The photo-op on Nov. 7 was symbolic and, for many, historic. The elder statesman was the Rev. Billy Graham, and rather than an evangelical superstar, the man who met with him at his North Carolina mountain home was Russian Orthodox Metropolitan Hilarion Alfeyev. This visit was linked to a Hilarion address to a Charlotte gathering of Protestant and Orthodox leaders, organized by the Billy Graham Evangelistic Association.

After generations of work with organizations such as the Episcopal Church and the World Council of Churches, the archbishop said many Orthodox leaders now realize that – on issues of sex, marriage, family life and moral theology – some of their ecumenical partners will be found in evangelical pulpits and pews.

“In today’s pluralistic world, the processes of liberalization have swept over some Christian communities. Many churches have diverted from biblical teaching … even if this attitude is not endorsed by the majority of these communities’ members,” said Hilarion, who is the Moscow Patriarchate’s chief ecumenical officer.

The most pressing current issue is the blessing of same-sex unions, which clashes with centuries of Christian tradition on marriage. The Orthodox cannot compromise on this point of doctrine, he stressed.

“The church has always been called to proclaim the truth of Christ and condemn sin, even in defiance of the demands of the society and ‘the powers that be.’ … How little does this resemble the discourse of today’s liberal Christians who seek to adapt the church to the standards of this world, to make it tolerant, not towards people, not towards sinners, but towards sin.”

Ironically, Hilarion’s visit to the United States took place during a semi-public debate about this very issue, on a youth-ministry website operated by the Orthodox Church in America (OCA), which has Russian roots. At the center of the storm was an essay entitled “Never Changing Gospel; Ever Changing Culture” by Father Robert Arida. He serves as pastor of the Holy Trinity Orthodox Cathedral in Boston, which has been praised on the Facebook page of the “Pro-Gay Orthodox Christians” network.

“While the past cannot be ignored, it also cannot be the only point of reference for the Orthodox Christian,” wrote Arida. If church leaders do not acknowledge “that the Holy Spirit continues to work here, now and in the future, the past will easily be transformed into an oppressive tyrant.”

It’s especially important, he stressed, for Orthodox leaders not to be swayed by the views of converts to Orthodoxy, particularly evangelical Protestants.

“If the church is to engage culture, if it is to contribute to the culture and if it is to synthesize what is good, true and beautiful coming from the culture to further the Gospel, then it will have to expose and ultimately expel the ‘new and alien spirits’ that have weakened its authentic voice,” argued Arida. “Among these spirits are Biblical fundamentalism and the inability to critique and build upon the writings and vision” of the theologians and “fathers” of early Christianity.

After fierce online debate and “consultation” with fellow OCA bishops, Metropolitan Tikhon Mollard publicly confirmed that he requested the Arida essay be taken down, along with the online comments appended to it by numerous priests and laypeople.

During his North Carolina address, Hilarion stressed that there must be more to ecumenism between evangelicals and the Orthodox than one or two issues, mentioning global threats to social justice and religious freedom — especially among the persecuted churches in the Middle East. He also pleaded for unity in defense of the “right of a child to be born, to defend the right of the aged to die a natural death rather than from a lethal injection administered by a doctor, to defend the right of doctors to refuse to administer abortion or euthanasia for moral considerations.”

The goal, he said, is for churches to welcome the lost, while refusing to compromise on doctrines defended through the ages – including sexual ethics.

“We do not at all insist that the church should refuse to help sinners,” he said. “Christians are obliged to pray for all sinners and to wish them salvation. … But the church cannot bless a vice. She cannot reform the norm of faith as sealed in the holy Gospel and the letters of the apostles.”

• Terry Mattingly is the director of the Washington Journalism Center at the Council for Christian Colleges and Universities and leads the GetReligion.org project to study religion and the news.