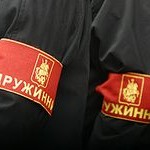 Moscow, October 18, Interfax – The majority of Russians questioned in an opinion poll expressed support for a proposal to organize Orthodox Christian militias for the declared purpose of protecting holy sites.

The idea was backed by 66% of respondents in a survey carried out by the All-Russia Center for Public Opinion Studies (VCIOM) last month.

The initiative to form militias for patrolling city streets, put forward in August by the leader of the Holy Russia organization, had the widest support among respondents who support the ruling Yedinaya Rossia (United Russia) party – 71%, – among those are older than 45 (70%), those who are poorly educated (73%), those living in cities with populations of more than a million and those not using the Internet (72%), VCIOM experts told Interfax.

The proposal was rejected by 23%. The groups with the strongest opposition to it were supporters of parties that are not represented in parliament – 33%, – people aged between 25 and 34 (28%), well-educated respondents (28%), and active Internet users (28%).

Holy Russia leader Ivan Otrakovsky, the author of the proposal, told the Interfax-Religion in August that Orthodox militias would patrol streets in the city and region of Moscow jointly with police to prevent Christian holy sites being vandalized.

The initiative was a response to February’s scandalous performance by feminist punk group Pussy Riot in Moscow’s Cathedral of Christ the Savior, a song that attacked Vladimir Putin, who was then running for president, and that earned two-year prison terms for two members of the band and a suspended two-year term for another.