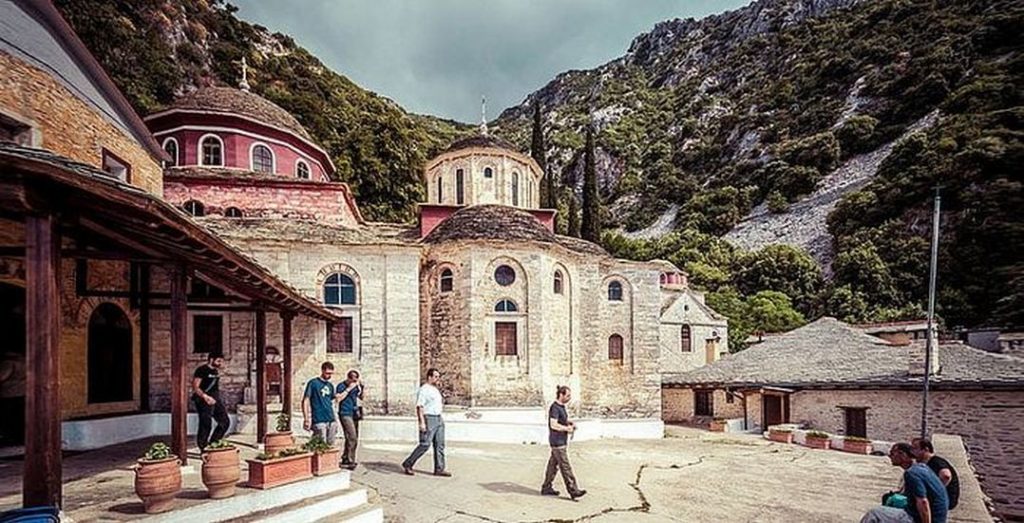 Mt. Athos — Patriarch Bartholomew of Constantinople will travel to Mt. Athos tomorrow and stay until Tuesday the 22nd, visiting a number of monasteries and sketes.

Yesterday, just two days before the Patriarch is to arrive, U.S. Consul General in Thessaloniki Gregory Pfleger also arrived on the Holy Mountain, according to Romfea, which reports that his plans are to visit Karyes, the administrative center of Mt. Athos, where he will meet with members of the Holy Epistasia, which is the chief executive monastic body.

It is also reported that he will spend the night in two different monasteries.

Pleger is a career member of the Foreign Service and has also served in Kiev.

It is no secret that U.S. government officials are pressuring and agitating for the recognition of the schismatic “Orthodox Church of Ukraine” (OCU) created by Constantinople last year. Earlier in the year, the members of the Holy Epistasia, with whom Pfleger will meet, refused to have a commemorative photo taken with an OCU hierarch who was visiting Mt. Athos. The Sacred Community of Mt. Athos, consisting of one representative from each of the 20 ruling monasteries, has never officially recognized the OCU, instead leaving it up to each abbot how to relate to them.

There is concern both on and off the mountain about what will happen when Pat. Bartholomew visits, as the majority of the monasteries fiercely reject his anti-canonical actions in Ukraine.

In September, Pfleger also met with Metropolitan Ioannis of Langadas who has made headlines several times by serving with hierarchs of OCU. He served with “Metropolitan” Epiphany Dumenko in July, which led Dumenko at that time to declare that the Greek Church had de-facto recognized the OCU.

However, the Langadas Metropolis issued a statement denying this claim, stating that Met. Ioannis had served in his “academic capacity” as a professor of theology at a Ukrainian university—a claim that makes no canonical sense. And this scandal did not prevent Met. Ioannis from serving with the schismatics again in August, with a number of other hierarchs from the Greek Church.

Pfleger reportedly discussed “topical issues” concerning “Orthodox teaching” among other things, as well as “an update on the history and work” of the Church of Greece with Met. Ioannis, though it is unclear why a Consul General needs to spend his time discussing Orthodox dogma.

Moreover, as the Union of Orthodox Journalists reports, Pfleger and Acting Assistant Secretary for European and Eurasian Affairs Philip Reeker also met with other hierarchs, and Reeker met with Archbishop Ieronymos just a few days before the Greek Bishops’ Council formally recognized Constantinople’s right to grant autocephaly to unordained schismatics.

As was discussed in a previous article, U.S. government officials have met with Pat. Bartholomew and high-ranking members of the Patriarchate of Constantinople and the Greek Church and on Mt. Athos at quite opportune times, including the nefarious Ambassador Geoffrey Pyatt, who, like Pfleger, also worked in Ukraine, where he launched the disastrous Maidan, and now works to undermine Church unity in Greece.

Of course, Secretary of State Mike Pompeo was also recently in Greece, where he signed a new defense pact, allowing the U.S. to expand militarily in Greece. A few days after his visit, the Greek Church suddenly announced that it would hold an extraordinary session of the Bishops’ Council to address the Ukrainian issue, at which the bishops recognized Pat. Bartholomew’s right to grant autocephaly in Ukraine.