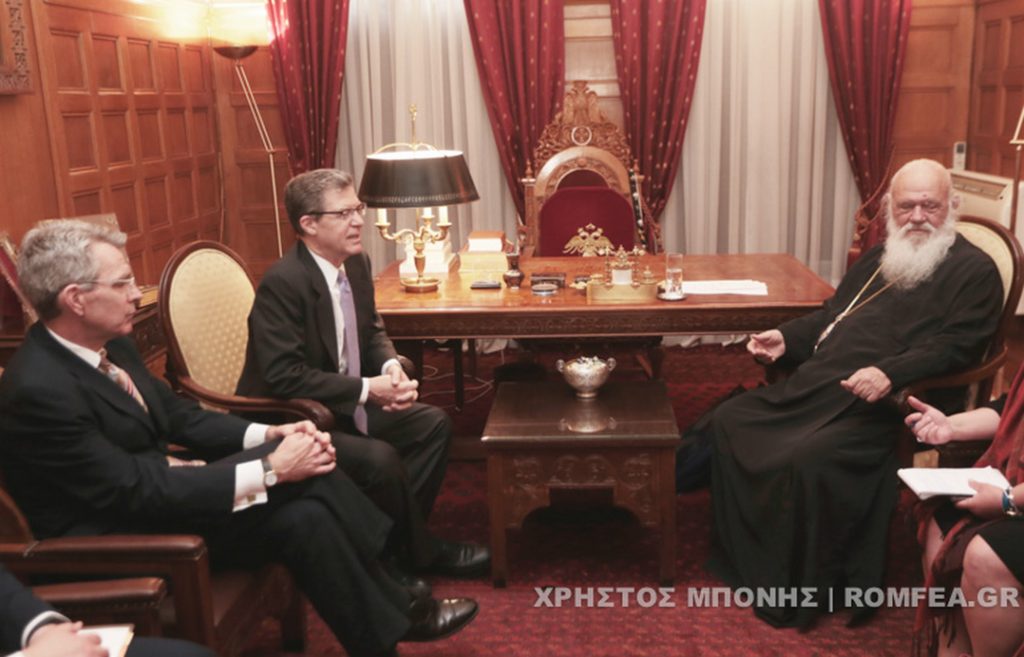 The U.S. uses crude “bulldozer diplomacy” to convince Orthodox hierarchs to transgress their conscience and throw their weight behind the Patriarchate of Constantinople and its anti-canonical actions in Ukraine, says His Grace Bishop Irinej of Bačka of the Serbian Orthodox Church.

This is obvious, he said in a recent interview with the Serbian outlet Pechat, given that many hierarchs have suddenly changed their opinion only after meeting with U.S. diplomats. The devil is ever-vigilant, His Grace said, working on Orthodox hierarchs to accept violations of the Orthodox faith and canons.

Just a week after His Grace’s interview, U.S. Secretary of State Mike Pompeo openly admitted that the U.S. pressures Orthodox Churches to recognize the Ukrainian schismatics.

Asked about the schisms in the Church today, Bp. Irinej said:

Circumstances are such that there is not much use in “diplomatic language” and euphemisms. It is better, of course, and more elegant to use as subtle expressions as possible, but in the face of bulldozer diplomacy, that has lost its meaning.

The following example shows how this looks in practice. The Chairman of the Synod of one of the leading Orthodox Churches, as well as the majority in its episcopate, clergy, monastics and people, did not show any enthusiasm for the decisions of the Mother Church, the Patriarchate of Constantinople, regarding the Church crisis in Ukraine, for the decisions already made and implemented that allegedly overcome the crisis and restore unity of Orthodoxy in that country. (As is well known, its hasty decisions and non-canonical measures not only did not overcome the schism in Ukraine, but further deepened it, causing a schism among certain Orthodox Churches, as well as within some of them.)

But the devil does not slumber, and after about a year of silence from the eminent Archbishop and the hierarchy of his Local Church, Mr. Brownback, the U.S. ambassador who monitors the state of religious freedom not only on the territory of his country but also on all other meridians, comes on the scene. After some seven or eight visits to the Archbishop and conversations with him, probably on theological topics, especially on issues in the field of canon law, we have a Copernican turn in the attitude of the Archbishop and the Synod around him. The result? A lightning-fast formal recognition of the schismatic structure in Ukraine as the real Church, despite the fact that many eminent canonists and theologians of the Church in questions perceive things quite differently.

Although he does not name it, it is obvious that Bp. Irinej is speaking of the Church of Greece under Archbishop Ieronymos of Athens.

And the same is happening in other Churches, he notes:

Similar scenes took place during meetings of American officials with the leaders and high representatives of some other Orthodox Churches. The mentioned officials, after all, openly and publicly, in the name of their truly great and powerful state, interfere in the internal religious and ecclesiastical problems of certain Orthodox Churches, although such activity is not in accordance with the spirit and letter of the democratic constitution of their own country.

With these words, I do not want to insinuate anything, nor to draw unfounded conclusions, nor to provide indulgence to those responsible representatives of the Church who, in my opinion, do not see all the dangers and temptations on the issue of the unity of the Church. I just transmit what I read, watch and listen to. I want to serve the truth as much as I can, without anger and bias.

In the same interview, Bp. Irinej also said more about how Constantinople deepened and spread the Ukrainian Church schism to the whole Church.