His baptizing of a gay couple’s children is only the most recent case in point. 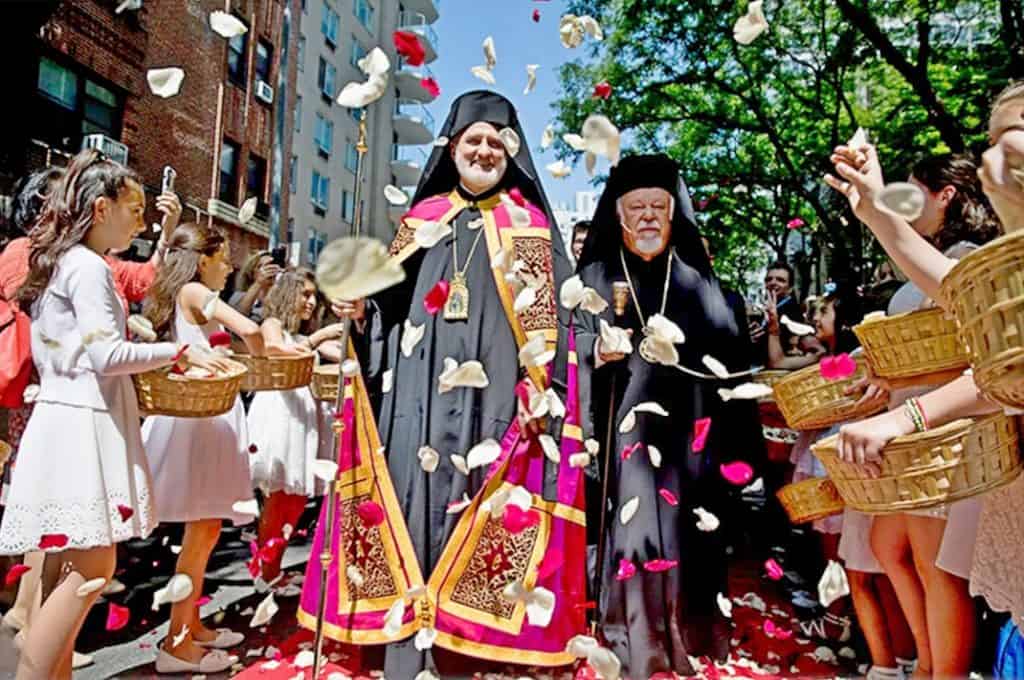 (RNS) — A couple of weeks ago, Elpidophoros, the Greek Orthodox archbishop of America, showed up in a seaside resort near Athens and baptized the son and daughter of a prominent gay couple, actor Evangelo Bousis and fashion designer Peter Dundas. The baptism, which was followed by a meal and “wild party,” was widely publicized.

And it created a bit of a furor in the Church of Greece.

As Orthodox protocol requires, Elpidophoros had informed the local metropolitan bishop that he would be performing a baptism in his diocese — but not that it would be on behalf of a gay couple. At least that’s what the metropolitan, Antonios of Glyfada, claimed after news of the event occasioned an “uproar” over what was thought to be “the first openly gay baptism” in Greece.

Antonios laid out his grievance in a formal letter of complaint to the Greek synod, whereupon the synod voted unanimously to send its own letter of protest to Elpidophoros and to forward that letter to the Ecumenical Patriarchate of Constantinople (Istanbul), which oversees the American archdiocese.

This elicited a full-throated defense of Elpidophoros in the form of a Religion News Service op-ed from the Rev. John Chryssavgis, a deacon in the American church and theological adviser to Ecumenical Patriarch Bartholomew, whose works he has edited and biography he has written. You don’t have to be an expert in Byzantine politics to reckon the op-ed as a riposte from Constantinople.

Asking rhetorically whether notification is expected when parents are single, atheist, civilly married or unmarried, Chryssavgis declared, “There should be no controversy over a baptism, to which all children are entitled.” He did not hesitate to call out by name Greek bishops who criticized the baptism and suggested it was time for “a frank discussion about sex and gender in the church.”

As for Elpidophoros himself, while he has thus far kept mum on the issue, this is not the first time since taking the reins of the American archdiocese three years ago that he has fluttered conservative Orthodox dovecotes.

Tapped as the Orthodox leader to give the opening prayer at the annual anti-abortion March for Life last January, he began with an obligatory “We affirm the gift and sanctity of life — all life, born and unborn.” But then he went on to say, “At the same time, we also affirm our respect for the autonomy of women,” noting how the Virgin Mary “freely chose” to bring Jesus into the world.

“We march not for coercion,” he said. “We march with compassion. With empathy. With love. And with our arms extended to embrace all.” This acknowledgment that there was another side to the abortion question did not sit well with a segment of the Orthodox Twitterverse or with the presiding hierarchs of four other American Orthodox churches (Antiochian, Bulgarian, Romanian and Serbian), who proceeded to issue a rejoinder.

“The Orthodox Church is, and always has been, unabashedly pro-life, regarding abortion as the killing of another human being,” they asserted. “In recent weeks, this position has been called into question, and, consequently, we, Orthodox Presiding Hierarchs representing several canonical jurisdictions in the United States of America, are compelled to proclaim the only true and correct teaching of the Church on this matter.”

On another front, two years earlier, Elpidophoros took the position that a non-Orthodox person who marries an Orthodox person in a Greek Orthodox church may receive Communion. Conservative hackles were raised by this apparent violation of Orthodox canons.

To understand where Elpidophoros is coming from, take a look at the lecture on Orthodox-Catholic relations he gave at Fordham University in September 2020. There he called for overcoming the “oxymoron” of letting the Eucharist (“the sacrament of unity par excellence“) come between the kind of interfaith couple that Greek Orthodoxy allows to be married in church.

Do we do it by practicing oikonomia, pastoral compassion, and accepting a measure allowing the non-Orthodox Christian spouse to receive Holy Communion? Today, in this unique context of Orthodoxy in the diaspora, we are able to examine the issue of Communion, that is contingent on the fact that we allow ecumenical couples to marry.

The principle of oikonomia, advanced by the fourth-century Cappadocian fathers, is all about recognizing that strict adherence to religious rules and regulations should at times yield to the realities of a fallen world. In Orthodoxy it is perhaps most evident in a willingness to allow the divorced to marry in church a second and even a third time — though with a liturgy less celebratory than what is laid on for first marriages.

To be sure, there has always been resistance to oikonomia within Orthodoxy. (In America these days that resistance is often coming from evangelical converts to a tradition they wish to make front and center in the culture wars.)

Pope Francis may be said to have embraced the principle when he permitted the bishops of his church to allow divorced and remarried Catholics to receive Communion. It’s pretty clear that Elpidophoros, a Constantinopolitan by birth, is cut from the same pastoral cloth.