While the Orthodox Church of Ukraine’s letter is addressed to the Ecumenical Patriarch, the letter speaks to concerns for the entire global Orthodox Christian community. 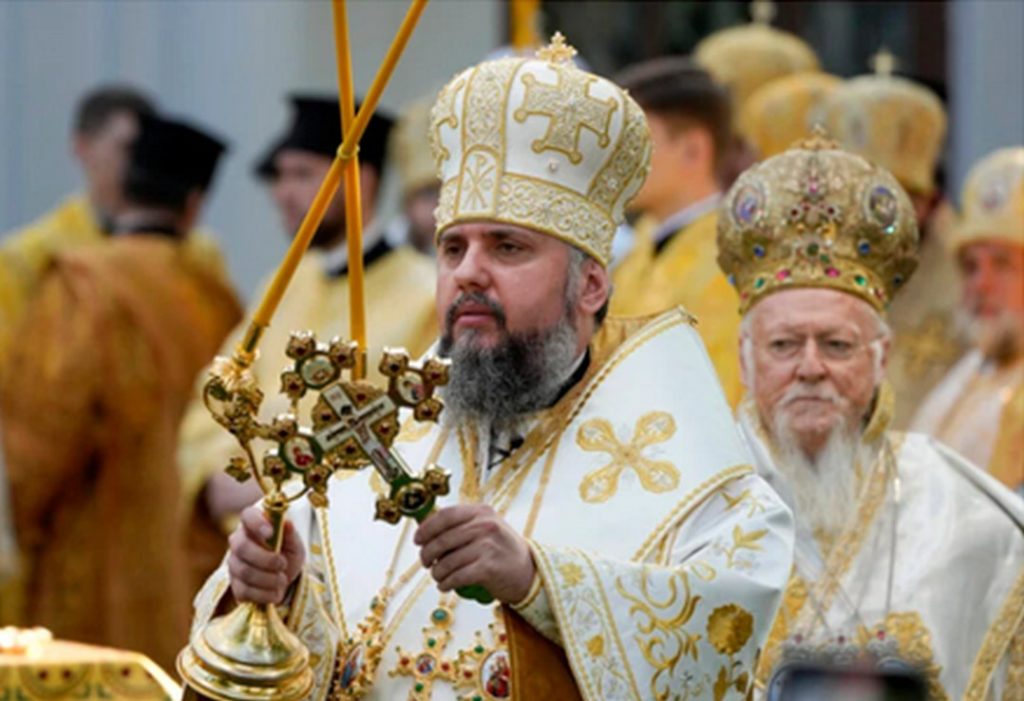 (RNS) — Metropolitan Epiphanius, the head of the independent Orthodox Church of Ukraine, has issued a letter to Ecumenical Patriarch Bartholomew, “first among equals” of Orthodox Christian leaders, asking Bartholomew to call Patriarch Kirill, leader of the Russian Orthodox Church, a teacher of heresy for his theological backing of the Ukraine war and deprive Kirill of his right to lead the Russian church.

The letter was approved at a meeting of the synod of the Orthodox Church of Ukraine Wednesday (July 27) on the eve of the feast day of the Baptism of the Kyivan Rus. The feast day, which commemorates the baptism of medieval Kyiv, has also been designated as Ukrainian Statehood Day by the Ukrainian government.

“Each murdered child, each raped woman, each destroyed residential building and temple is not only a war crime, but also an act of renouncing Christ,” the letter reads. “The moral responsibility for the committed crimes rests not only on the direct perpetrators, but also on their ideological inspirers — Moscow Patriarch Kirill and like-minded hierarchs who for decades propagated the ethno-phyletic and racist doctrine of the “Russian World” and are now blessing the attack on Ukraine.”

The “Russian World” teaching imagines a transnational Russian civilization with a political center in Moscow, spiritual center in Kyiv, common language and religion (Russian and Russian Orthodoxy) and traditionalist social values in opposition to the “globalized” and “liberalized” West.

Since then, Moscow has encroached on territory historically overseen by the Greek Orthodox Patriarch of Alexandria, Theodore II, by setting up a parallel network of churches on the African continent, which is under the authority of the Greek church. Moscow’s first African churches appeared after Theodore joined with Bartholomew to recognize the independent Orthodox Church of Ukraine.

According to the July 27 letter, Kirill aims to “radically increase the presence of the Russian Orthodox Church outside of Russia … and in this way impose hegemony and the dictates of the Moscow Patriarch on the Orthodox world.”

The letter cited the Declaration on the Russian World Teaching, published in March, which calls out the “Russian World” teaching as heretical and further “rejects all forms of government that deify the state (theocracy) and absorb the Church, depriving the Church of its freedom to stand prophetically against all injustice.”

The declaration, which remains unaffiliated with any official Orthodox church institution, has since been signed by nearly 1,500 Orthodox theologians across the globe (including many clergy).

Wednesday’s letter also made reference to an Open Address to the Heads of the Orthodox Churches, made by members of the Ukrainian Orthodox Church, which, unlike the Orthodox Church of Ukraine, maintained ties to the Moscow patriarchate. This statement similarly condemns Kirill’s support of the “Russian World” teaching and questions his right to occupy the position of Patriarch.

The Ukrainian Orthodox Church, which long predates the Orthodox Church of Ukraine, still refuses to recognize the independent church, though an unofficial meeting between clergy of the two groups, facilitated by the Ukrainian government, took place earlier this month.

“Russia is a country that for centuries linked its identity with Orthodoxy” the letter also says, but has since “been insidiously replaced by a civil religion that is apparently based on Orthodox tradition, but alien to the spirit of the Gospel and content of the Orthodox faith of the Holy Fathers.”