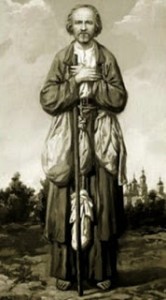 On Sunday, 7 December 2014, His Beatitude Metropolitan Onufry of Kiev and All Ukraine glorified Bartholomew Bondarenko, a Staretz and Fool-for-Christ’s Sake of the Cherkassy Eparchy of the UOC-MP. His was chosen to be numbered among the saints by the Holy Synod of the Ukrainian Orthodox Church on 16 September 2014, due to his popular veneration.

Saint Bartholomew was born in 1870 near the Holy Monastery of the Holy Trinity in Chyhyryn. As a youth he spent his life in prayer and in the contemplation of God’s perfection and the imperfection of humanity. People were drawn to the fact that the words and prayers of Bartholomew were acceptable to God, and there were many cases of healings through his prayers, and he led many to live according to God’s will.
Bartholomew revered Abbess Rafaela (Tertatska) and the sisters of the Holy Monastery of the Holy Trinity, but when the Bolsheviks seized power, the sisters were forced to leave the Monastery. Half an hour before he even forewarned Abbess Rafaela of her impending martyrdom if she didn’t escape, but she refused to leave her Monastery. Saint Rafaela was brutally taken from her Monastery in 1927 by the “servants of Satan” and horribly beaten and then buried alive. 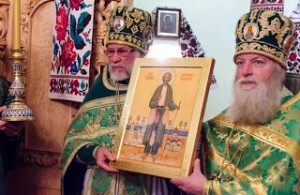 In subsequent years Bartholomew was pursued by the Soviet regime, and he was repeatedly sent to a psychiatric hospital, but the grace of the Lord took care of the Elder. Bartholomew reposed peacefully in the Lord on 17 October 1931, and the place of his burial has attracted believers from all the regions of Ukraine.

He joins the choir of the Saints of Cherkassy which includes the 103 Holy New Hieromartyrs of Cherkassy, Orthodox priests, who were shot by the Bolsheviks and put into a mass grave.
Saint Bartholomew will be annually commemorated on October 17th and February 20th.
[subscribe2]
Share. Twitter Facebook Pinterest LinkedIn Tumblr Email
Previous ArticleCommunique of the Metropolitanate of Australia and New Zealand Regarding the Desecration of Graves in Sydney
Next Article Why Was Jesus Born In Bethlehem?