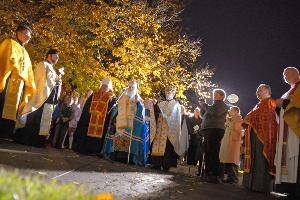 VIOREL FLORESCU/STAFF PHOTOGRAPHER
Patriarch Filaret of the Ukrainian Orthodox Church and Ukrainians from Clifton and Passaic gathering at the Ukrainian Cathedral to mark the Holodomor.

When the hunger began, Peter Velechko ate grain meant for horses. When the horses died, he ate horse meat. When the meat was gone, he clawed the farmers’ fields with his hands and ate the seeds. When the seeds were gone, he found the holes of field mice and ate their stores of grain.

When the hunger lifted in 1933, Velechko looked like a skeleton. But he was alive.

“Everything we ate was illegal. If they found us, they would have shot us,” Velechko said. “But nobody in my family died.”

Velechko was one of a handful of people with memories of that awful time who gathered Saturday night to commemorate the 80th anniversary of the Holodomor at the Ukrainian Orthodox Holy Ascension Cathedral in Clifton. The ceremony was led by Patriarch Filaret, worldwide leader of the Ukrainian Orthodox Church.

Nearly 4 million people died of starvation during the Holodomor, according to new research by the Harvard Ukrainian Research Institute.

“These people were deliberately starved,” said Olena Lenczuk, a member of the church who helped organize the event. “We want the world to remember the fact that the Soviets took the bread away.”

For decades, the Holodomor has been a matter of international dispute, as the Soviet Union maintained that the process of forcing peasants to live and work on collectivized farms accidentally resulted in a famine that killed millions of people across the Soviet Union, not just in Ukraine.

This remains the official position of the Russian government. In August 2012, the Voice of Russia, the government’s official media company, published a story admitting the starvation was “a terrible tragedy” but accusing those who label it an intentional genocide as advancing “Russophobic historical myths.”

But scholars say there is little doubt that Soviet dictator Josef Stalin was responsible for it.

After the collapse of the Soviet Union, documents were discovered proving that Stalin knew about the famine and ordered government officials to steal food from Ukraine’s peasants, said Gennadi Poberezny, chief cartographer with the Harvard Ukrainian Research Institute’s Holodomor Atlas Project. It was an orchestrated attempt to starve Ukraine into accepting farm collectivization and Communist rule, said Poberezny, who is using newly available data to map the scale of the mass starvation.

“There used to be lots of disagreement among scholars, but in recent years we’ve uncovered archival documents proving Stalin ordered it,” said Douglas Irvin-Erickson, a researcher with the Center for the Study of Genocide, Conflict Resolution and Human Rights at Rutgers University, Newark. “There’s no question. Stalin knew.”

During Saturday night’s ceremony, Patriarch Filaret walked across the asphalt driveway of the Orthodox church swinging a metal thurible that emitted incense smoke and jangled with the sounds of small bells. He turned to face a stone memorial to the Holodomor, built in front of the church. Between the patriarch and the stone sat a round loaf of knotted bread, in memory of the hunger.

After a prayer, the patriarch led the crowd of about 400 people in a series of mournful hymns. As they sang a refrain of repeated “hallelujahs,” church member Mikola Stafak pulled hard on the clapper of a large bell.

People jumped. The soothing sound of a crowd singing in harmony was drowned out by the bell’s harsh clang.

“People dug up corpses and ate them. When they ran out of energy to dig, there was cannibalism,” said Victor Rud, an attorney in Ridgewood whose father survived the Holodomor. “The suffering was horrible.”

The 80th anniversary comes at a difficult time for relations between Ukraine and Russia.

At the end of November, the Ukrainian parliament is scheduled to vote on whether to join the European Union. At an international gathering in Yalta in September, Sergei Glazyev, an aide to Russian President Vladimir Putin, threatened to impose steep tariffs on any goods imported from Ukraine into Russia if Ukraine joins the rest of Europe. Instead, Russian leaders want Ukraine to join the proposed Eurasian Union, a Russia-led economic association of former Soviet states.

“This year’s Holomodor ceremonies have a direct bearing on the European Union decision,” said Harvard’s Poberezny. “It has direct impact in Ukrainian politics now.”

At the Clifton ceremony, survivors of the Holodomor were focused less on such geopolitical issues, and more on making sure their near-death experience is not forgotten.

“I want the whole world to know what the Communists did,” Velechko said. “We cannot let it happen again.”