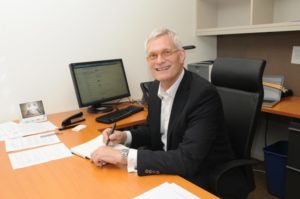 The issue of leadership is one of the most discussed issues of our time because, as it is often said, there is a void of great leaders in today’s tumultuous world.

The elements, of course, concerning a leader are first, that position does not make the leader, and second, that the leader becomes a leader when he is fortunate enough in his time to have to face a crisis.

Then, his key leadership qualities are distinguished: the integrity of his character, a mindset to go against the grain of popular opinion, “if you can keep your head when all about you are losing theirs and blaming it on you” (from Rudyard Kipling’s If), and to tell the truth, even if it is necessary to pay a price, small or large.

Our Archdiocese has been shaking from its foundations since September, when this newspaper revealed the profound economic crisis it faces. An unprecedented crisis. One that has deeply undermined the relationship of our people’s trust in the leadership of our Church. A crisis that has exposed us to the general American society and to all Hellenism, and especially to the Greeks of Greece.

And how did the leadership of our community and Church respond to the crisis?

With a vast, unacceptable silence.

Of course, this page has demanded Archbishop Demetrios’ resignation as of October, as the first and necessary step in the face of the crisis.

And the honor of the people was saved by – who else? The Stavros Niarchos Foundation co-President Andreas Dracopoulos, who in our interview with him in mid-April, in response to the question of how he regards the developments with the Archdiocese,  said: “we are shocked, but at the same time, unfortunately, it does not surprise us… Persons in leadership positions need to reboot, to remind themselves why they are there in the first place, and should have the common sense and decency to go home when they have to go. Enough!” He added that we should all work together as a community to support our religion, our customs and traditions, and lastly, but equally important, our Greek language. Without the Greek language, our Greekness will also be lost.

And now Mark Arey, who served the Archdiocese as a priest after embracing our Orthodox faith, posted the following on Facebook : “The archbishop is no longer part of the solution to the matter. His continued presence at the helm of the Church in America is part of the problem. I do not intend to be unkind toward His Eminence nor ungrateful for the many opportunities of service that he gave to me. What I am trying to be here is honest, to speak the truth with love.” And he demanded the archbishop’s resignation.

Being publicly unpleasant, telling the truth, as do this newspaper, and Messrs.  Dracopoulos and Arey, is not an easy task. There is always a price, even if it is the right decision or even if one criticizes the most unsuccessful leader. He has some friends and fans, too. Always, or almost always, however, there is one, or some, in a crisis who listen to the voices of responsibility and conscience, rather than the temporary expediency.

And they are the ones that help society take another step forward.

BOSTON – Mark Arey, Executive Director of the Hellenic Initiative Organization, posted an article on Facebook urging His Eminence Archbishop Demetrios of America to resign, noting that “his continuing presence at the helm of the Church of America is part of the problem.”

Arey was a close collaborator of Archbishop Demetrios. He was a priest for 34 years of the Greek-Orthodox Archdiocese of America. He served for seven years in different positions at the Archdiocese including as Director of the Department of Interchristian and Interorthodox Relations. He also served as spokesman for St. Nicholas church at Ground Zero and he had many times appeared in the American Press including The New York Times.

A few years ago, Arey departed from the Archdiocese and left the priesthood. He was converted to Orthodoxy. He was an excellent student at Holy Cross Theological School and he is fluent in Greek.

In his article on Facebook, he wrote among other things that: “I do not intend to be unkind toward His Eminence nor ungrateful for the many opportunities of service that he gave to me. What I am trying to be here is honest, to speak the truth with love.” He also stated that: “For those of you who take offense, I ask your forgiveness beforehand.”

The National Herald communicated with Mark Arey and verified the authenticity of his post on Facebook. He expressed the wish if it will be published, to be published in its entirety.

The entire article of Mark Arey is the following:

I have thought a lot about posting these thoughts, and I certainly do not wish to scandalize anybody, but with the growing crisis in the GOA and the abysmal publicity about the Saint Nicholas National Shrine, I felt that I should. For those of you who take offense, I ask your forgiveness beforehand.

The last seven years of my life as a clergyman (2007 – 2014) were spent in service at the Archdiocese and to the Archbishop. The Archbishop is a good man who is truly impressive in his academic abilities. Nevertheless, with all of the managerial and financial problems swirling around the Archdiocese, and the fact that HIs Eminence is now over ninety years old, I feel it is unjust for the faithful of the Archdiocese to expect him to continue to serve. Indeed, it is as unreasonable as it is unjust. He clearly does not have — and should not be expected to have — the expertise, energy, and facility to restore the Archdiocese to its former stability.

There will be blame enough to spread around for the current sorry conditions, but what we should be seeking are solutions! His Eminence is no longer part of the solution; his continuing presence at the helm of the Church of America is part of the problem. I do not intend to be unkind toward His Eminence nor ungrateful for the many opportunities of service that he gave to me. What I am trying to be here is honest, to speak the truth with love.

It is time for a new captain to take the helm and help restore the Archdiocese to a position of trust and responsibility. The nineteen years of the Archiepiscopacy of His Eminence Demetrios deserve a better end than the continual unravelling of Archdiocesan affairs. The Saint Nicholas National Shrine is singularly the most important project in the history of the Archdiocese. After years of fighting to maintain our legal right and moral responsibility to rebuild, Archbishop Demetrios has led the project to exhaustion and an embarrassing mismanagement that in the corporate world, would demand the immediate resignation of the CEO. But we are not a corporation; we are the Body of Christ. And the member who has been our leader these last nineteen years is deserving of a dignified retirement and rest.

I understand that it is hard to give up a glorious position. But I was there at the last address to the clergy by the ever-memorable Archbishop Iakovos at the 1996 CLC. His voice quaked with emotion and my eyes filled with tears as he said, “I lost none of you…”. Archbishop Demetrios may have only served half as long as Archbishop Iakovos, but he deserves just as as much. Let us pray that he makes the right decision sooner rather than later, and submits a grateful resignation to His All-Holiness and the Holy and Sacred Synod of the Ecumenical Patriarchate. Then the Church can move on, and his legacy of nineteen years of service will not be lost and can abide with dignity and grace.”