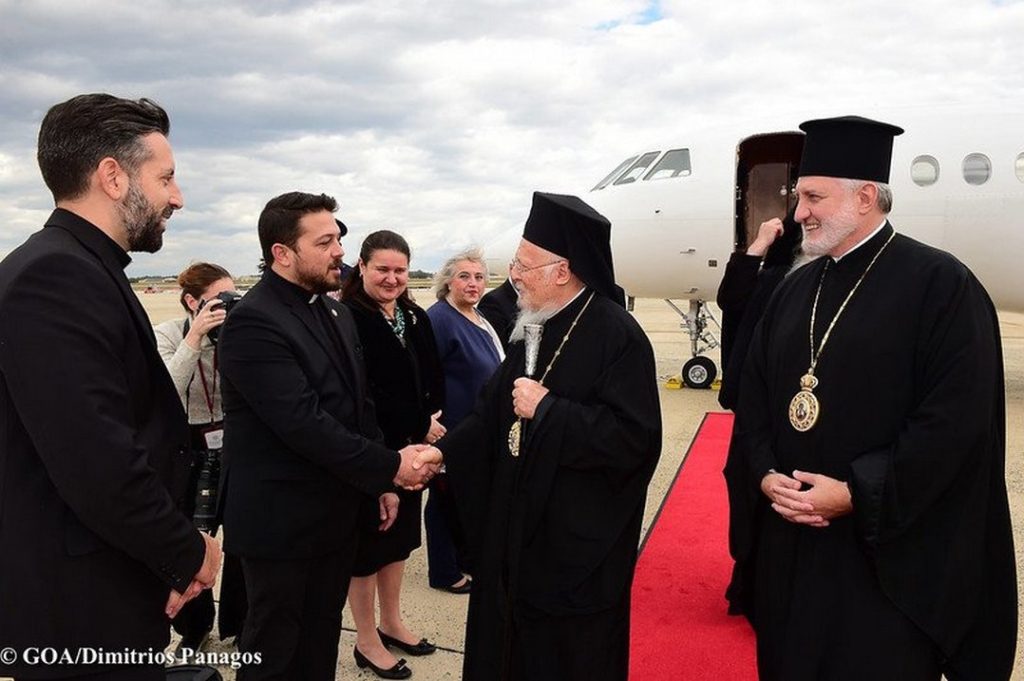 WASHINGTON, DC — His All-Holiness Ecumenical Patriarch Bartholomew was joyously welcomed today by His Eminence Archbishop Elpidophoros of America at Joint Base Andrews in Maryland.  The Ecumenical Patriarch, spiritual leader of Orthodox Christians worldwide, will begin his 12-day official visit in Washington, DC.

At an official ceremony at the St. Regis Hotel His All-Holiness offered greetings stating, “With a heart filled with gratitude and great enthusiasm, we speak words of blessing and benediction for all of you, and for the great American Nation. It has been twelve years since we last visited the Holy Archdiocese of America, her devout clergy and the many friends in government that have become close to us during our Thirty-Year Patriarchal tenure.

“We begin again, as we did in 1997, and we come with the same message we imparted on that day, October Nineteenth: “We come to you in love, beholding you as the newly planted branch of the ancient vine of Christ’s first called disciple Saint Andrew. You, our most beloved daughters and sons, have transplanted the faith of the Apostles upon this blessed continent. America recognizes your deep commitment to living that faith fully, for she has enshrined in her Constitution the fundamental principles upon which the lasting qualities of the Church are founded.”  (Full text www.goarch.org/-/2021-10-23-greeting-hah-arrival-usa)

In his welcome to His All-Holiness Archbishop Elpidophoros stated, “We, the devout children of the Mother Church of Constantinople, welcome You with open hearts into our midst for the seventh time in Your historic and renowned Patriarchal ministry…We are overcome with deep emotion and much joy, because we behold in Your venerable person the embodiment of the Holy Great Church of Christ, which You have now led for thirty years — the longest Patriarchal tenure in history. Indeed, we await with great eagerness Your sage guidance, paternal wisdom and wise Patriarchal counsel, as we strive to live the life of our Orthodox Christian faith in the very heart of America.  The coming days will certainly hold many experiences that we will all cherish, and which will inform our vision of the life of Christ in this land. 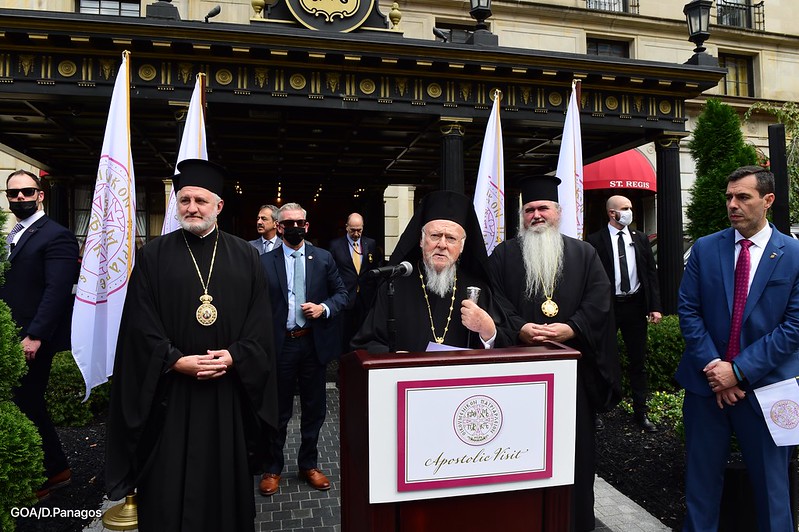 “We look to You, then, Your All-Holiness, to show us the way, and to give to us a renewed and inspired vision for the faith of the saints and the Apostles that You know so well.” (Full Text www.goarch.org/-/2021-10-23-welcome-archbishop-elpidophoros-to-ecumenical-patriarch-bartholomew-to-usa)

After the official welcome, His All-Holiness, the Archbishop and members of the Official Delegation departed for the residence of Her Excellency Alexandra Papadopoulou, Ambassador of the Hellenic Republic to the United States, who will host a dinner in honor of the Ecumenical Patriarch this evening.  Tomorrow, Sunday, October 24, 2021, His All-Holiness will preside at the Pan-Orthodox Chorostasia at Saint Sophia Cathedral in Washington, DC and induct the newly appointed Senators for Orthodoxy and Hellenism. Following will be the Pan-Orthodox Luncheon with the Saint Sophia Community. In the evening, His-All Holiness will be honored at the AHEPA Grand Banquet at the Mayflower Hotel. 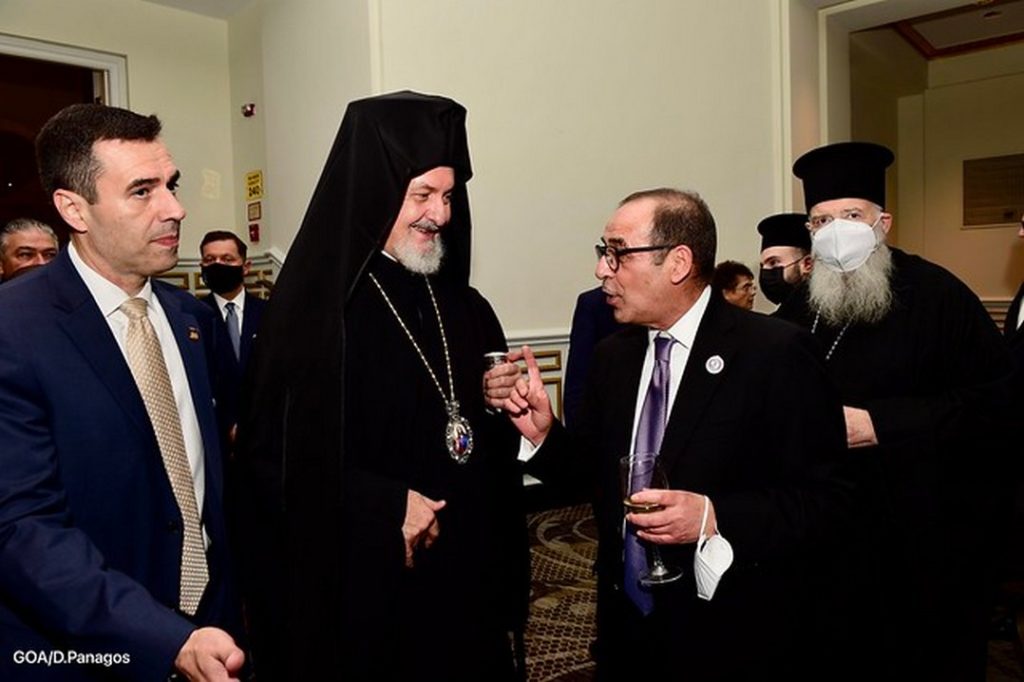 WASHINGTON, DC – His Eminence Elder Metropolitan Emmanuel of Chalcedon presided over the Pan-Orthodox Liturgy at Saint Sophia Cathedral in Washington, DC today, October 24, 2021, inducting the Inaugural class of Senators for Orthodoxy and Hellenism. His All-Holiness Ecumenical Patriarch Bartholomew, who was scheduled to preside over the service, felt unwell in the morning and his doctor recommended that he rest and be taken to hospital for observation.

During the service, His Eminence Archbishop Elpidophoros, who instituted the Senators in 2020, stated: “Your Eminence, these devout men and women before You today are stewards of varying ministries within the Church. But all have produced ‘a hundredfold’ through their harvests of leadership. They bow their heads to receive Your blessing for them to continue their service to this Eparchy and to the Great Church of Christ. As they serve in a capacity as ex-officio members of the Archdiocesan Council, their counsel and guidance are invaluable. We humbly ask that You bestow upon them your archpaternal benediction, so that in good health and spiritual prosperity, they may continue to minister to the Body of Christ.”

WASHINGTON, DC – His All-Holiness Ecumenical Patriarch Bartholomew was released this morning from George Washington University Hospital where he spent a night on medical advice.  He will resume the schedule of his Apostolic Visit.

Events and meetings scheduled for today include a meeting with President Joseph Biden at the White House; a meeting with Secretary of State Antony Blinken at the State Department; and a visit to the Turkish Embassy at the invitation of Turkish Ambassador to the US, Hasan Murat Mercan. His All-Holiness will deliver a speech for the Museum of the Bible via videoconference. In the evening, the Ecumenical Patriarch will attend a dinner at Georgetown University hosted by its President, John J. DeGioia, and Wilton Cardinal Gregory of Washington, DC. 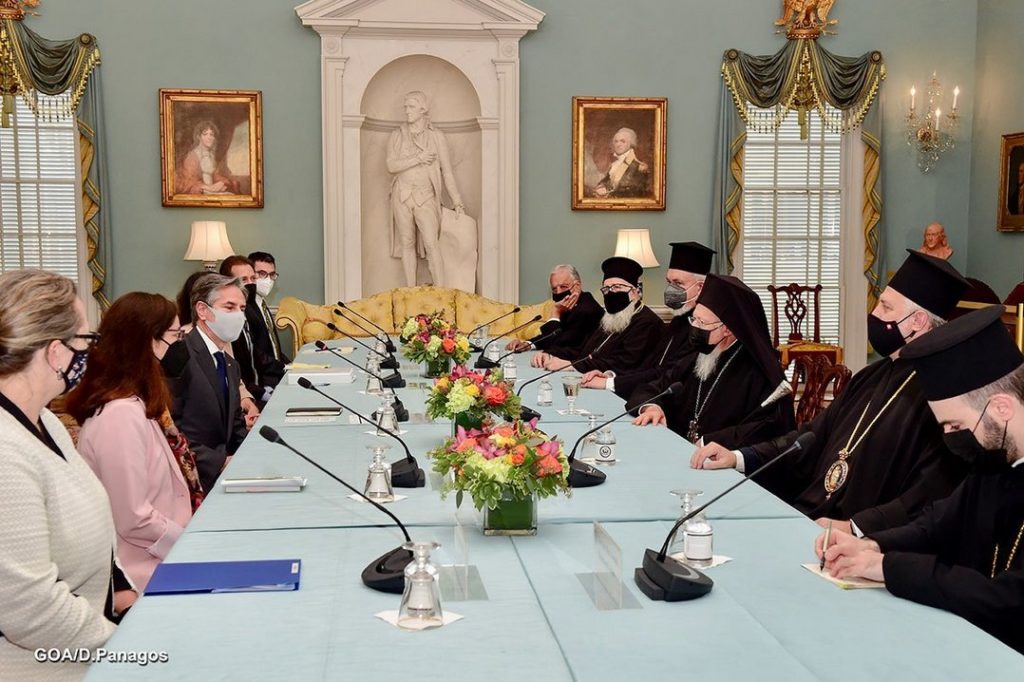 Patriarch Bartholomew meets with US Secretary of State Blinken

His All-Holiness informed Secretary Blinken about various issues of concern to Orthodox Christians in the United States and throughout the world as well as about the vision and ministry of the Ecumenical Patriarchate to promote inter-religious dialogue and environmental awareness. In particular, the Ecumenical Patriarch raised concerns about the plight of Christians in the Middle East and Northern Africa, expressing his hope for stability and religious freedom in the region. He also addressed the urgent need for immediate political action in response to the climate crisis, underlining the responsibility of all leaders to fulfil their promises to address climate change. Finally, he emphasized the vital importance of inter-religious cooperation among all faith leaders for the sake of mutual tolerance and peaceful coexistence around the globe.

In a statement, media spokesman Rev. Dr. John Chryssavgis noted: “The Ecumenical Patriarch and the Secretary of State held an extended and productive discussion on a number of issues.  His All-Holiness raised concerns about the plight of Christians in the Middle East and Northern Africa, addressed the urgent need for appropriate political action in response to the climate crisis, and emphasized the role of inter-religious dialogue for mutual tolerance and peaceful coexistence.” 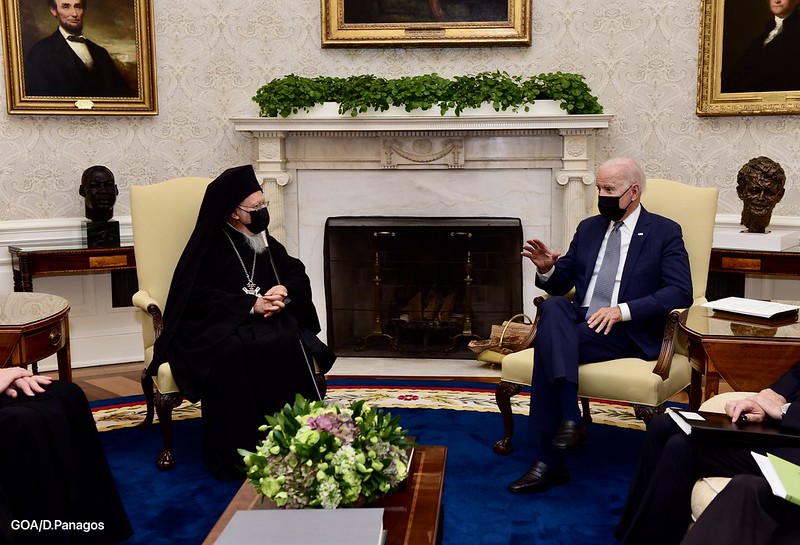 President of the United States Joe Biden welcomed His All-Holiness to the White House for a meeting on October 25, 2021. (GOA/D. Panagos)