Archimandrite Vaseilios, former Abbot of the Iveron Monastery of Mouth Athos, was the keynote speaker at the annual celebration of Greek letters.

NEW YORK – Archimandrite Vasileios, former Abbot of the Iveron Monastery of Mouth Athos, was the keynote speaker at the annual celebration of Greek letters on the occasion of the Feast Day of the Three Hierarchs presented by the Archdiocese of America.

Guests were welcomed to the nave of Holy Trinity by the Dean of the Cathedral, Fr. John Vlahos after a performance of the Archdiocesan Byzantine Choir. Archbishop Demetrios offered closing remarks.

The feast day of the three fathers of the Orthodox Church, St. Basil the Great, St. Gregory the Theologian and St. John Chrysostom, has traditionally been associated with Greek Paidea – especially the Greek language, because their appreciation for classical Greek learning was instrumental in its preservation after the triumph of Christianity in the Roman Empire. 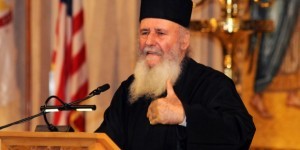 Fr. Vasileios’ speech, titled “The Divine Liturgy as a Theophany of the Holy Trinity” was a moving presentation on the spiritual and humanizing power of the liturgy, but references to the beauty of the liturgical drama that envelops and inspires participants as it unfolds in the Greek language also reminds of the observation of philosopher Christos Yannaras, who called Orthodoxy the last remaining vessel of universal Hellenism.

Ioannis Efthymiopoulos, the Archdiocese’s National Director of the Department of Religious Education, who introduced Fr. Vasileios, also spoke briefly about what paidea meant to the Three Hierarchs, and of the continuing importance of their teachings, especially their messages of universal equality and of the philanthropic obligations of the well-off.

Fr. Vasileios preceded his prepared presentation with a homily on the relationship between Hellenism and Christianity that was translated into English by TNH columnist Christopher Tripoulas.

He began by noting that the Greeks have always been a small nation with great intellectual and spiritual demands. They sought the One, and absolute Beauty and Justice. Fr. Vasileios emphasized that the Greeks were not converted into Christians, rather, they found in the New Testament the answers to all the great questions posed by the philosophers.

He added that throughout history the Greeks sought freedom from death, and said that Byzantine iconography, which survived the death the Byzantine Empire, is Orthodox Church’s “gift of eternity” to humanity in the form of the icons of the Crucifixion and Resurrection of Christ.

He completed his transition to his lecture by noting “The Three Hierarchs, however, transcend letters words and philosophy by entering into the silence of eternity του μελοωτους αιωνος. In the words of St. John Chrysostom, while we can seek nature’s truth with human tools like language and logic, “but what is above nature, we can only honor through silence.”

Nevertheless, Fr. Vasileios said in his prepared text, the Divine Liturgy, elucidated by the Three Hierarchs, inducts communicants into the mystery of the Godhead in Trinity and enlightens them into the meaning of life.

“The Divine Liturgy, the life of the Church, is based on this event of the Resurrection and the destruction of death.”

Thus the participants in the Divine Liturgy experience an epiphany: “It is the end, the conclusion, the Resurrection that throws light on everything. Without the Resurrection, everything is obscure and meaningless.”

The wise men and women of the world, Greeks and non-Greeks receive the answer to the great questions in the Resurrection: Man was not created for death.

But the Divine Liturgy includes messages for our times before the end: Peace and Love are its essence.

“The entire sacred action is celebrated in peace. ‘In peace let us pray to the lord….again and again in peace.’ And we conclude the whole service in the same peace: ‘Let us depart in peace.’”
Another great truth unfolds through the Liturgy: “Things are difficult and a major struggle is required,” in life, “But God’s love is great,” Fr. Vasileios said.

“You accept times of peace as a gift from God. And times of trial you accept as a preparation for blessings that you would not otherwise be able to receive. You remain calm amidst all the turmoil of your problems, because you can feel the presence of Him who transcends everything. “

After speaking about the climax of the Divine Liturgy, the offering of Holy Communion, he concluded with the story of the life and sublime death in 1971 of Yiayia Maria, a humble woman – not recognized as a saint – who demonstrated that the ‘successors to the great Fathers and

Ecumenical teachers are to be found…in the persons of completely unassuming and unknown believers.”

Archbishop Demetrios, who first met Fr. Vasileios 60 years ago, said during his remarks, “You can only imagine my joy to meet you again.”

The Archbishop expressed thanks to Alexander Press, whose founder John Hadjinicolaou and his colleagues travelled from Montreal and provided all the guests with the English text, and invited everyone to a reception in the Cathedral Ballroom, where everyone had the opportunity to speak with Fr. Vasileios.