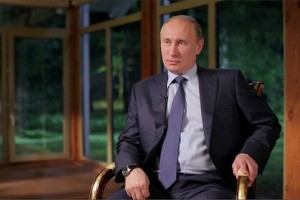 Vladimir Putin gave an interview to the makers of the documentary film The Second Baptism of Rus, which screened on Rossia 1 television channel on July 22.

The Second Baptism of Rus is a full-length documentary film about the resurgence of the Russian Orthodox Church in Russia over the last 25 years. The film gives a detailed presentation of the main stages in rebuilding church life in Russia from 1988, when the country marked the 1000th anniversary of the Baptism of Rus, to today.

QUESTION: We still remember the times when you could ruin your career prospects if you had your child baptised and it got found out. You could face problems in university too, not to mention the situation back in the 1920s-30s, when clergy and laypeople alike faced repression. What are the lessons you think we should learn from those years of persecution against the church?

VLADIMIR PUTIN: I felt the effects of those times too. My mother had me baptised and kept it secret from my father, who was a communist party member. He wasn’t a party official of any kind, just worked at a factory, but he was some kind of grassroots party organiser in his factory workshop. Anyway, my mother, supposedly without letting him find out, had me baptised, did it in secret, and so my family too felt the constraints of those times.

I think the lesson to be learned is quite simple. At all the most critical moments in our history our people look to their roots, to their moral foundations and religious values. We all know how when the Great Patriotic War began, the first to announce the start of war to the Soviet people was Molotov, who addressed the nation using the word “Citizens”. But when Stalin then addressed the nation, despite his hard-line if not brutal stance against the church, he chose a completely different form of address: “Brothers and sisters”. There was tremendous significance in this choice of address. These were not just words but an appeal to people’s hearts and souls, to their history and their roots, so as to bring home the enormity and tragedy of the unfolding events, and to rouse people, mobilise them to rise in defence of their homeland. It was always this way when the country faced difficulties and hardships, even during the years of state atheism, because the Russian people could not survive without these moral foundations.

QUESTION: Church leaders and people involved in church life call the 25 years that have gone by since we celebrated the 1000th anniversary of the Baptism of Rus a “second baptism of Rus”. Relations between church and state really have undergone change over this time and taken on new substance. Do you think that it is fair to speak of a ‘second baptism of Rus’, and do you see evidence that would make these words justified?

VLADIMIR PUTIN: I do not want to argue with those who speak of a second baptism of Rus, but I personally would not say this is the most fitting way to describe what has happened over this time. I would say, rather, that we have seen a return to our roots, and the question this raises of course, is why this has taken place. Our generation remembers the Moral Code of the Builders of Communism. Essentially, it was just a simplified version of the religious principles shared by practically all the world’s traditional religions.

But when even this simplified moral code disappeared people found themselves caught in an immense moral and spiritual vacuum, and the only way to fill it was to return to authentic, true values. These values were inevitably religious in nature.

There is therefore nothing surprising in the fact that people started looking to their roots, to faith and spiritual values. This was a natural revival process for the Russian people. They did this spontaneously, without prodding from outside, from the authorities or from the church. The church was hardly in a state to be able to prod anyone at that time. It was in a lamentable state. On the material side of things the Soviet authorities had robbed it probably more thoroughly than they robbed anyone, but on the organisational and spiritual side it was also in a very serious situation. It was a spontaneous movement from the people themselves to turn back to their roots.

QUESTION: Mr President, you met with Metropolitan Lavr, the head of the Russian Orthodox Church Abroad. Was this your initiative, or was it his request? What brought about this meeting, and was it a turning point in reuniting the church?

VLADIMIR PUTIN: It was more my initiative really, but to my surprise, the Russian Orthodox Church Abroad and Metropolitan Lavr himself responded with support and understanding. I say this was to my surprise because relations between the Russian Orthodox Church Abroad and the Soviet authorities had always been strained to say the least, for obvious reasons, and I was a bit surprised at the time at how ready they were to respond to my initiative, but after the first meeting, in New York if I recall, I immediately understood why they were responding this way.

I realised that the Primates of the Russian Orthodox Church Abroad were true Russian people. They might live far from their homeland, but they keep its interests in their hearts. They realised that the time had come to reunite the entire Russian nation, to bring all the peoples of Russia together, all the many different ethnic groups that are united by the Orthodox faith. As you may know, passports issued during the Russian Empire did not classify people by ethnic group, but did state their religious faith.

The Primates of the Russian Orthodox Church Abroad, people who have known many trials and tribulations in life, and faced great challenges and hardships, obviously came to the conclusion that the moment had come to reunite. The Russian Orthodox Church played a unique role in our people’s and country’s history after all. Essentially, it was after adopting Orthodox Christianity as a religion that the Russian nation began to emerge as a unified nation and began building a centralised Russian state.

At the foundations of the Russian nation and the centralised Russian state are the same spiritual values that unite the whole of that part of Europe now shared by Russia, Ukraine, and Belarus. This is our common spiritual, moral and values space, and this plays a very big part in uniting the people. Naturally, the Russian Orthodox Church in Russia itself and the Russian Orthodox Church Abroad felt this in their hearts and started moving closer to each other. The authorities’ task here was simply to support this process.

QUESTION: During your conversation with Metropolitan Lavr you said, “I want to make it very firm and clear that the authorities will never interfere in church affairs”. You were very convincing. You mentioned the Russian Orthodox Church Abroad’s unifying role. After the Soviet Union collapsed and new countries emerged in Central and Eastern Asia, Kazakhstan, the Orthodox Church has an even more unifying role to play today, bringing people together throughout the post-Soviet area.

VLADIMIR PUTIN: There are many different areas where the church and state can work together. Above all, this includes teaching our young people moral and spiritual values, supporting the family as an institution, raising children, supporting those in need of particular help and assistance. I am not just talking about the sick or people with disabilities, but also people in the prisons, for example. They need moral support too. The church is a natural partner for the state authorities in such areas.

The church also has another very important role to play within Russia itself – creating the conditions for interfaith and interethnic peace and harmony. In this respect the church’s importance goes beyond the dimensions of today’s Russian Federation because it also helps us to build good relations with people in other countries, above all in the post-Soviet area of course. I already mentioned the common historical moral and spiritual roots that we share with the peoples of Ukraine and Belarus. Essentially, we have a common church, common spiritual source, and a common destiny. As for the other CIS countries and their peoples, the church can play a very constructive and positive role here too.