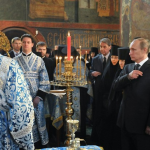 Russian president-elect Vladimir Putin (right) crosses himself during a prayer at the Novo-Dyevitchi Convent in Moscow on May 6, 2012.

MOSCOW — Vladimir Putin took the oath of office in a brief but regal Kremlin ceremony on Monday, while on the streets outside thousands of helmeted riot police prevented hundreds of demonstrators from protesting his return to the presidency.

Putin, 59, has ruled Russia since 2000, first as president and then during the past four years as prime minister. The new, now six-year term will keep him in power until 2018, with the option of running for a fourth term.

“I consider service to the fatherland and our nation to be the meaning of my life,” Putin said in addressing 3,000 guests in a glittering Kremlin hall.

Despite unprecedented security measures in the center of Moscow, where streets were closed to traffic and passengers prevented from exiting subway stations, at least 1,000 opposition activists tried to protest along the route Putin’s motorcade took to the Kremlin. Many wore the white ribbons that are the symbol of the anti-Putin protest movement.

The demonstrators, separated into several groups, were met by helmeted riot police. A total of 120 were detained, including opposition leader Boris Nemtsov.

Putin’s inauguration came a day after an opposition protest drew more than 20,000 people, fewer than the mass demonstrations in the months that preceded his March election but still a sign that the anger over Putin’s heavy-handed return to the Kremlin has not faded.

Sunday’s protest turned violent when some demonstrators tried to march toward the Kremlin and riot police beat back the crowds with batons and detained more than 400 people. The use of force after the winter’s peaceful rallies indicates that Putin may take a harder line toward the protesters now that he is once again president.

After taking the oath of office with his right hand on a red copy of Russia’s constitution, which had been carried into the hall by goose-stepping Kremlin guards, Putin stated his commitment to democracy.