[ditty_news_ticker id="27897"] What if the 9 Orthodox patriarchates got involved in the Ukraine-Russia war? - Orthodox Christian Laity 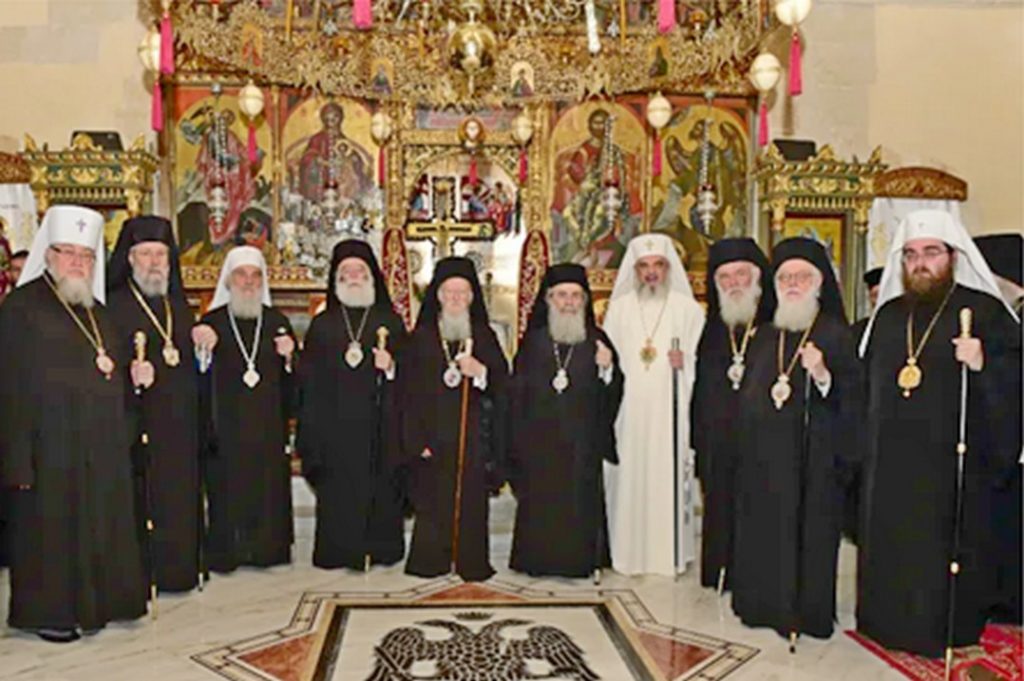 Eastern Orthodox Primates gathered in Crete to prepare for the pan-Orthodox Council, June 17, 2016. | GOA/DIMITRIOS PANAGOS. Photo courtesy of the Ecumenical Patriarchate of Constantinople.

Did President Putin have a legitimate, legal, or moral basis for invading Ukraine beginning on Feb. 24, 2022, and going on to date?

Was Putin’s aggression against Ukraine as a nation and its people justified under the “casus belli” laid down by Hugo Grotius in his book, On the Law of War and Peace, in the 16th century? Or was Putin’s actions in killing indiscriminately Ukrainian people and razing entire cities in Ukraine morally justified under Thomas Aquinas’s philosophy of war?

It is a fact that the Ukrainian government did nothing to invite the genocidal acts of Putin. As for the Freudian rationalizations advanced by Putin and his minions to protect supposedly the Russian people in the occupied territories in the southeast of Ukraine, these are fake and pathological arguments known as self-defense mechanisms to justify their genocide impulses.

International law speaks of a nation’s sovereignty to be free in its decisions as long as these activities do not impinge on the rights of other nations.  Yet, President Putin has from the start denied the sovereign rights of Ukrainians to choose whether to join NATO and the EU. Putin wants to impose his aggressive instincts on its neighbor Ukraine by usurping its sovereign rights to associate with and seek membership in NATO and the EU.  This is brute and raw physical force expressed in the endless bombardments of the civilians, towns, infrastructures, and patrimonies of Ukraine.

“Might” does not equate with “right.”  It is not because one can do this evil that he/she should do it.

Yet, all these unwarranted destructions happened during the holy days and weeks preceding the religious rituals of the Eastern Orthodox Church.  To put it bluntly, Putin’s acts are un-Christian and pure evil.  Whoever supports his war against Ukrainians and the nation of Ukraine is guilty of his immoral, illegal, and un-Christian conduct.

Where is the Patriarch of the Russian Orthodox Church Vladimir Mikhailovich Gundyayes (aka Kirill or Cyril) in this whole debacle?  Is he a man of God?  In the service of Jesus Christ? Or is he a slave of Putin?  Why is it he has not used his religious authority to influence Putin to stop the genocide of the Ukrainian people?  Ukrainians are Christian Orthodox, too. Patriarch Kirill has a moral and religious obligation to counsel Putin about Jesus’s teaching on love of thy neighbor regardless of the historical fact that the Ukraine Orthodox Church split from the Russian Orthodox Church in October 2018.

History records the prevalence of nine Eastern Orthodox Patriarchates, located in Constantinople (Istanbul), Alexandria, Antioch, Jerusalem, Moscow, Georgia, Serbia, Romania, and Bulgaria.  The Patriarchate of Istanbul is considered the primordial Eastern Orthodox Church as it is symbolically referred to as “First among Equals.”

Should the nine Eastern Orthodox Patriarchates call a Synod to pass judgment or condemnation of Putin for his un-Christian violence against the Christian country and people of Ukraine? Should this Synod gather in Istanbul or in Jerusalem, the birthplace of Christianity?

Many of my readers know me for my effective influence in changing the policies, hearts, and minds of the Qatar authorities when they lifted the edicts that persecuted Christians and non-Muslims in Qatar, which existed for 14 centuries.  (See my book, The Knight and the Falcon: The Coming of Christianity in Qatar a Muslim Nation ).  Religion today as before has a place in politics. Religion is in the DNA of people. It cannot be denied or stifled.  That is why international law protects the precept of religious freedom.

In addition to the Synod of the nine Eastern Orthodox Patriarchates, I believe the U.S. State Department should encourage, and if possible, organize a conference on the persecution and genocide of the Ukrainian people, perpetrated by Putin and his immediate cohorts.  In the Department of State, there is an office specifically created 10 years after my work in the field of diplomacy and religion, staffed with an Ambassador-at-Large for International Religious Freedom. I believe Ambassador Rashad Hussain could and should organize this conference to add more weight to protect the Ukrainians from annihilation in the hands of Putin.

Ambassador Hussain could organize this conference with the nine Orthodox Patriarchates, and he could invite the Organization of Islamic Conference (OIC) to participate in this endeavor since he is well known to OIC members.

What I am advocating for is a world congress of religious heads to supplement NATO and the EU to intervene to stop the genocide of Ukrainians.

Prof. Dr. Joseph Ghougassian taught philosophy and psychology for more than 40 years.  He is a lawyer specialized in international law.  As US Ambassador to Qatar (nominated by President Reagan), he established the American School of Doha, influenced the Qatari authorities to lift 14 centuries of prohibition on the public practice of Christianity, laid the foundation for a strong military US air force presence in Qatar, and he opened a floodgate of commerce and businesses between America and Qataris.