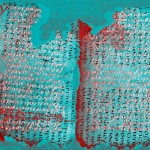 Spectral imaging reveals the hidden text on the medieval palimpsests. Copyright St Catherine’s monastery of the Sinai. Used with permission.

The Greek Orthodox monks of St Catherine’s monastery in Sinai have been accumulating manuscripts and books since the sixth century, making their library the world’s greatest repository of early medieval writing after the Vatican. The collection is even richer than it first appears, because many of the 3,300 ancient manuscripts contain hidden text and illustrations older than their visible contents – and a large scientific effort is under way to reveal and record them.

The concealed texts are in palimpsests, manuscripts on which the original writing was erased so that scribes could reuse the precious parchment. Faint signs of the original text remain, as traces of pigment or indentation, which can be enhanced visually through modern techniques of spectral imaging at different wavelengths.

“We may think now of St Catherine’s as a remote place isolated in the middle of the Sinai desert, but in medieval times it was a major destination for pilgrims from around the Christian world, who would have used the library and brought manuscripts to it,” says Michael Phelps, president of the Early Manuscripts Electronic Library in Los Angeles. “We already know of nine languages in the palimpsests.”

As a place of pilgrimage since its foundation by the Emperor Justinian in around 550 – it includes both the relics of St Catherine and the site where Moses saw God in the burning bush – the monastery has always had an outgoing attitude. A 21st-century manifestation of this openness is the desire of Archbishop Damianos of Sinai and his monks, especially the librarian Father Justin, to digitise their collection of manuscripts, including palimpsests, and make them available for study by scholars worldwide.

Arcadia, a British charity set up by Lisbet Rausing, the Tetra Pak heiress, is funding the five-year programme to image the St Catherine’s palimpsests with a $2.1m grant. “This hugely exciting project fits perfectly into Arcadia’s mission to save endangered cultural materials through modern technology,” says Anthea Case, the fund’s principal adviser.

Phelps leads a team of 10 US-based scientists and technical staff working on the project. The team has made two preparatory visits to Sinai this year, and will set off for the monastery again next week – unless security concerns force a postponement. Data will start flowing in earnest in 2013.

“Operating our advanced digitisation technology in such an austere desert location challenges our planning and logistics,” says Michael Toth, the programme manager. “Digital post-processing of the manuscript images to reveal hidden text isn’t like CSI – you don’t just push a button and suddenly see it appear in a couple of minutes,” he adds.

Preliminary data will be released this autumn for analysis by 18 scholars who have particular expertise in the range of ancient languages found in the palimpsests.

Many of the erased texts are in Christian Palestinian Aramaic, a language used between the third and eighth centuries, which then died out. “These texts were erased because they were in a dead language for which the medieval scribes had no use,” Phelps says. “We can help to recover its voice.”

Preparing new parchment was an elaborate process of flaying, soaking, curing, dehairing and splitting animal hides, so recycling redundant manuscripts by scraping off the old text made good sense.

“Many of the manuscripts dating from the seventh to the ninth century are palimpsests,” says Father Justin, who is originally from Texas. “During those centuries, especially, it was often difficult to obtain new parchment.”

There are known to be 130 palimpsests at St Catherine’s – though research is likely to find more. Most are religious texts such as scriptures, homilies and services. An important exception awaiting further study is a medical treatise that may date back to the late classical period and seems to be the oldest known Hippocratic text.

“Scholars have been able to decipher occasional words visible in the margins, but these texts, often of the greatest importance, have thus far eluded attempts to read them. The prospect of recovering these texts is a very exciting development,” adds Father Justin, who had been running a sophisticated digital-imaging operation at St Catherine’s for several years before the project started. “Any western university would be proud of the digitisation facility that Father Justin has put together,” comments Phelps.

The technical heart of the project involves spectral imaging across a wide range of wavelengths from the ultraviolet through visible light to the near infrared, says Keith Knox, a key member of the scientific team who has been involved in manuscript research for 20 years in his spare time (his main job involves detecting objects in space from multispectral images of the sky).

The equipment is designed both to transmit light through the parchment and to shine light on to the surface and image its reflection. But the biggest single source of data is ultraviolet irradiation, which makes traces of ancient ink fluoresce blue.

Computer programs combine all the spectral data, using special algorithms to make the overt top text disappear as far as possible while enhancing the appearance of the undertext. False colour is used to make it stand out.

The palimpsest work has a lot in common with image analysis in other fields such as astronomy. “The task is to extract information out of noisy data,” Knox says. “It is a detective story, trying to find out what’s there.”

What makes the detectives’ job more difficult is that medieval scribes did not necessarily reuse pages from which text had been erased in the same order or even orientation as the original manuscript. And a further complication is that some texts were erased and reused twice, leading to “double palimpsests”.

Although no one has tried before to access so many palimpsests in such a remote location as Sinai, multispectral imaging has already shown what it can do on individual manuscripts. The best example is the Archimedes Palimpsest, a 13th century Byzantine prayer book containing erased texts from the 10th century. These include seven treatises by Archimedes, two of which (The Method and Stomachion) cannot be found anywhere else.

A US collector bought the manuscript for $2m in 1998 and deposited it with The Walters Art Museum in Baltimore for conservation, imaging and scholarship. The project, which featured several of the scientists now working on the Sinai manuscripts, has shed light on Archimedes and revealed texts from the ancient world, including speeches by Hyperides, an Athenian orator of the fourth century BC, and a third century AD commentary on Aristotle’s “Categories”.

It remains to be seen whether new treasures to match the Archimedes Palimpsest are revealed at the Holy Monastery of the God-trodden Mount Sinai (to give St Catherine’s its official name). But with such expertise focused on the world’s oldest continuously operating library, some remarkable discoveries are likely.